Who'd have thunk it?

Nine years have passed since I wrote my very first story about shady stuff going on at Miami City Hall.  That original story was about Harry Emilio Gottlieb, who newly elected Mayor Tomas Regalado had appointed to be the new Film Commissioner for the City, and who in a matter of days let it be known that he didn't know anything about the job, didn't want to learn anything about the job, and instead wanted to be considered as the "Film Ambassador," because what he really wanted to do was hang out on movie sets and hobnob with the actors. Harry was not only clueless, but also a moron as the below video reveals.

My very first story about Harry had to do with his taking the City car that was assigned for his official use home with him. 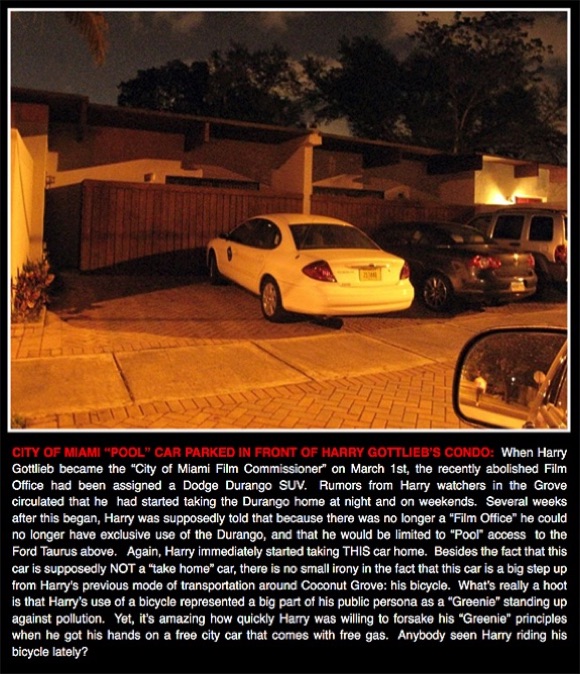 I have often thought about the night that I parked outside of Harry's condo to take the above photo because I had a premonition then that if I wrote a story about Harry, it would somehow have some lasting impact on my life.

Nine years, and a couple thousand stories later, it turns out that I was right.

Overall, as a body of work, I'm proud about the impact that the Crespogram has had on both the community and on me personally.

True, my blog is somewhat of an acquired taste, and I tend to occasionally be profane, opinionated and even on occasion wrong, but overall, I'll put the last 9 years of stories I've written up against anything that anyone else in South Florida has written about the political landscape in South Florida, and I think I more than hold my own.

I have written stories that no one else would, and in the process uncovered and documented countless examples of misuse of public money, bad behavior, and chicanery, that, had it occurred in other parts of the country would not only have led to real criminal investigations, but would have resulted in public officials bening led out of buildings in handcuffs.

Unfortunately, we live in a community where corruption has been baked into the system, and where Katherine Fernandez-Rundle, the corrupt State State Attorney has never met a Cuban politician she wouldn't provide cover for under the Family and Friends Program.

Tomas and Raquel Regalado should have been removed from office for countless examples of bad behavior, starting with his efforts to bribe the Chief of Police to resign back in 2010-2011, and then for his campaign finance violations.  Willie Gort is another example of the protection provided by Fernandez-Rundle's office, when the FDLE investigation into his campaign finance violations was stopped dead in its tracks after an FDLE Agent sought a subpoena to seize Willie's computers.

Long before law enforcement got interested in Matthew Greer, I was the one who  revealed in 2011, that he was engaged in sneaky behavior with the CRA, and am proud that my stories killed the deal before Greer could walk away with 6 blocks of city land.

My stories about Robert Meyers, then the Executive Director of the Miami-Dade Ethics Commission and his notes to a secretary inviting her to lunch and suggesting that she "wear something nice," along with exposing that attorney Kerry Rosenthal, the Commission's Chairman had illegally held that position for 11 years were credited with playing a part in he and Rosenthal resigning.

Then there were all the stories about crazy city employees, from batshit crazy Deputy Chief of Police Luis Cabrera who tried to ban me from entering the MRC building, to Angel Zayon, who on his first day at work showed up late, and left early, and who managed to piss off so many people on an almost daily basis that many believe that this was the single best image I ever posted on this site: 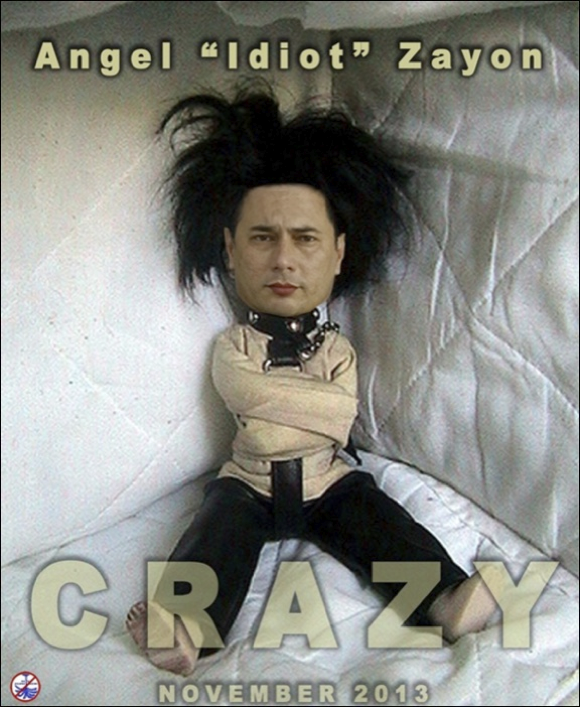 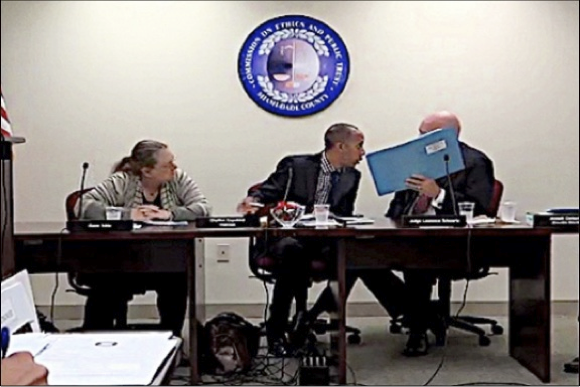 So many people, so many stories.

Janice Learned the erstwhile Assistant City Manager who I nicknamed La Veja Loca, and who among other crazy things brought in her former business partner's brother to be the  Finance Director, even though he wasn't a CPA, and who managed to cause the city to loose millions over bad financial decisions,

Placido "Pumpkin "Head" Diaz, who at the time was working for Commissioner Willie Gort,  pulled out a pistol in a restaurant at Bayside and threatened to kill himself, and then the police department did their best to try and cover the story up for months. In spite of all the other stories and allegations, or perhaps because of them Diaz ended up as the Chief of Police in Sweetwater.

And then there's my favorite "Thuget," Ada Rojas, whose got hired even though her piss test showed up positive - a classic story of how Miami is definitely different that almost anywhere else in America -  followed by her getting arrested for trying to drive through a Presidential motorcade, to her duties as the chief ticket solicitor for folks at City Hall.

Then who can forget Commissioner Frank Carollo calling Police Chief Manny Orosa after he was stopped for a traffic violation, and all the shit that happened when he refused to cop a plea and the Ethics Commission was forced to hold a trial.

The Ethics Commission started by violating the Sunshine Law as captured in this screen grab of the video I shot of the trial: 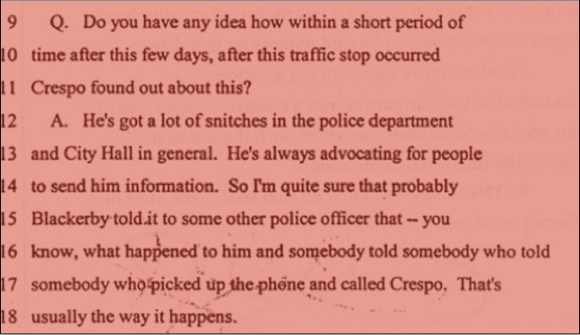 This was as classic an example of what a violation of the Sunshine looks like when in the course of a public meeting, public officials decide to hold a private conversation, but thanks to the Family and friends Plan, the corrupt State Attorney's office's closed out their "investigation," by claiming no violation had occurred.

My favorite part of this fiasco, beside Frank eventually copping a no contest plea to "Exploitation Of Official Position," was Miami Police Chief Manny Orosa claiming under oath that I had a lot of "snitches in the police department."

Of course the Crespogram would probably not exist as long as it has without my  favorite weasel dick pal, Marc "Pay For Play" Sarnoff.

There were times that I felt like I was James Boswell to his Dr, Johnson, but then we did have some good times, and he certainly sparked my creative juices, like the time I posted this illustration of how I figured he'd look in prison garb. 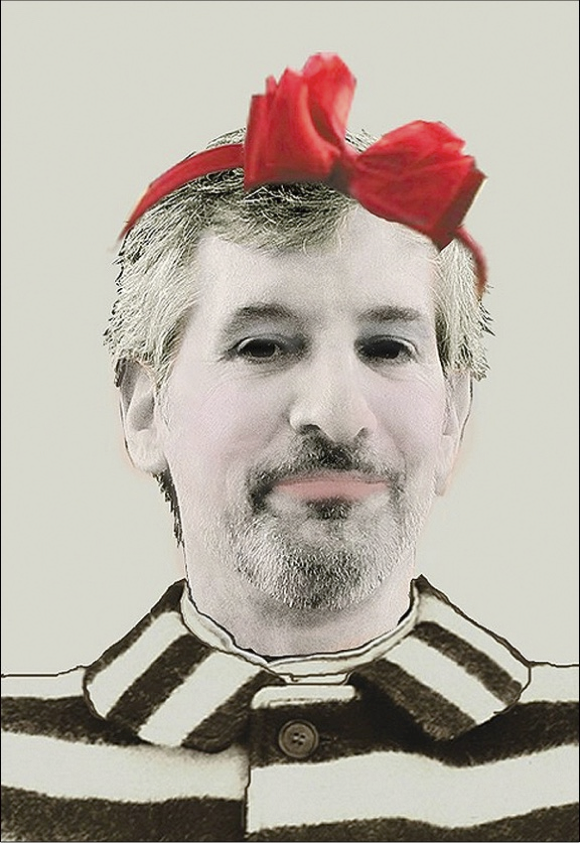 Sarnoff appears to want to come back and play in the sandbox again, and I'm sure we'll pick up where we left off.

And how could I ever forget that before Donald Trump announced that he was running for President I pegged him as aN unethical asshole and filed an ethics complaint against him for his efforts to take over the Crandon Park Golf Course.

Beside the fun stuff, there were also the serious, bad stuff, like my stories about accused child molester the "Reverend" Jerome Starling, and my continuing reporting on the antics of Thug cop Javier Ortiz and his BFF Edward Lugo, and all the other bad stories involving the police department, including my story about the street narcotics unit, and the possibility that they planted a gun, and worst of all the stories about the destroyed homicide evidence in the shipping container under I-95, and the theft of the 11 revolvers from the police property room, which revealed just how corrupt and unwilling law enforcement in this community is to doing what's right.

So many stories, I can't remember them all, and they never stop coming.

Now that Regalado's gone, it's Francis Suarez's time, and in my next story which will be posted either Friday or Monday you'll learn that while he's slicker, and younger, speaks better English and might pluck his eyebrows, he's surrounded himself with folks just as slick and conniving and out to screw the pooch as the gang that surrounded Regalado.

Although I tend to laugh and joke about doing what I do,  it hasn't always been easy, and I've had to withstand more than the usual efforts of folks who, recognizing that if they can't kill the message, they'd as soon try to kill the messenger, and I mean that literally as well as figuratively.

I was subjected to a cyber-stalking incident that the FDLE discovered was linked to the wife of a notorious Cuban drug dealer with ties to Tomas Regalado.

I was also the target of a massive and comprehensive identity theft effort took months to undo, and that caused one federal official who I dealt with to congratulate me on managing to piss off someone so badly that they'd go through the trouble that they did to screw up my IRS, Social Security and banking records all in one fell swoop.

When none of those efforts worked, there were also efforts to spy on me by inserting keystroke and other spyware programs within documents I received from the City of Miami in response to public records requests.  Below is the detailed list of both the spyware I was able to detect and remove from my computer, and the documents that I received from the city that contained this spyware.

I've even been the target of Santeria sacrifices, and repeatedly been warned by folks who would be privy to that kind of information that my cell phone is tapped.

It also goes without saying that over the years I've also been subjected to repeated searches of my past live in an effort to find anything that could be used to threaten or blackmail me to shut up and go away.

None of that however, has stopped me from continuing to wake up most mornings with  a song in my heart, laughter on my lips and a new story to write.

As we head for the tenth year of a now revised Crespogram Newsletter, I hope to be able to continue what I do, and along the way introduce a couple new tricks to make things even more entertaining and interesting.

No matter what the New Year brings though, the one thing that I've often reminded folks on this day is that if anyone who reads this has been the subject of one or more of my stories, or has been pissed off or offended by anything I've written, you can blame Tomas Regalado and Harry Emilio Gottlieb.

Regalado was stupid to appoint Harry, and Harry's antics caused me to start writing about the City of Miami.

The result has been, It's Miami, Bitches!

IT'S MY PARTY AND I'LL BE CRAZY IF I WANT TO