After a slow start in trying to figure out how to do what they do best during this time of crisis - screw the public - the Miami City Commission has decided that when in doubt they should just revert to behaving like they did before the virus, especially since after the last two meetings it's evident that with the additional effort required to make and submit public comments, what few people were paying attention before the virus now have even less interest in recording or writing emails to express public comments or outrage, and so the agenda for the April 23rd, takes us back to the good old days of in your face fuck-you-ism.

Last November I wrote how Keon Hardemon had arranged to give $232,000 in money collected from the leases negotiated by the Miami Sports and Exhibition Authority (MSEA), to the Martin Luther King Economic Development Corporation, where Christine King, the Hardemon family consigliere is the Executive Director, and where "Uncle Billy" Hardemon has been a long time Chairman/Board Member.

It's now 5 months later, and it seems it's time for another cash infusion for the Martin Luther King Economic Development Corporation.  This time it's $135,000, from the Commissioner's Anti-Poverty Initiative money, AKA, as the Hardemon Family Slush Fund.

COMMISSIONER KEON HARDEMON HAS BEEN VERY MEEK AND QUIET DURING RECENT MEETINGS, NO DOUBT COUNTING THE DAYS UNTIL HE HOPES TO GET ELECTED TO THE COUNTY COMMISSION AND GET AWAY FROM THE CITY HALL SHIT SHOW, BUT IN THE MEANTIME HE'S CONTINUING TO MAKE SURE THE HARDEMON FAMILY GET'S EVERY PENNY OF ANTI-POVERTY MONEY THAT HE CAN GIVE THEM 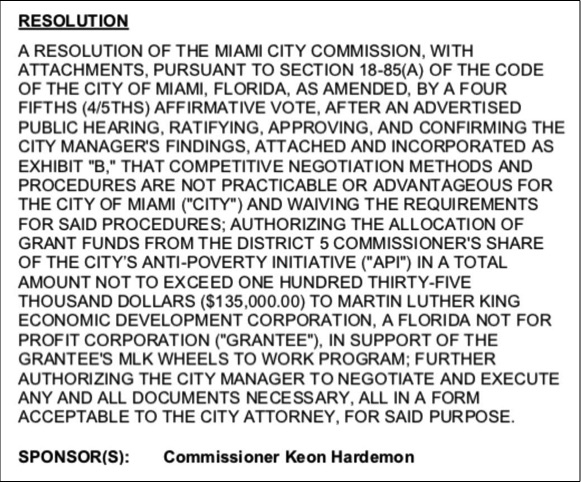 It's a sick and sorry state of affairs, this looting of the city, and to drive that message home with an exclamation point, understand that at next Thursday's meeting hardemon is not only giving "Uncle Billy" personal slush fund $135,000, but he giving "Uncle Billy's" wife, "Auntie Barbara,"$250,000 of Anti-Poverty Initiative money for her personal charity. 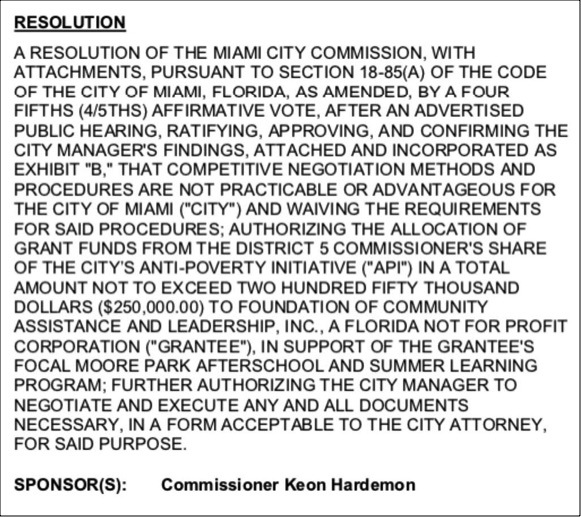 A couple years ago I went to Moore Park to try and find out what this program was all about, and got a run-around when I asked to talk with someone in charge and to look at the financial records for the operation pf this program.

It was only afterwards that I found out that "Auntie Barbara" was involved, and that no matter what good this program claimed they were doing, my getting the run-around and "Auntie Barbara" being involved was enough to convince me that there was definitely shit in the game, because when it comes to the Hardemon family, they are as addicted to taxpayer money like a crackhead is to dope. 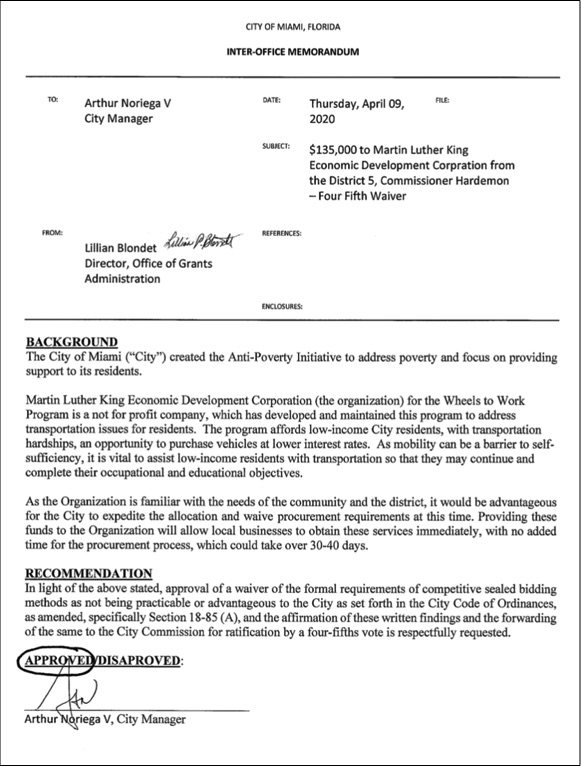 Some of you might wonder what the MLK Wheels To Work Program is, and you wouldn't be the only one.

I'd never heard of it, and so I went to the city's Legistar website to do a word search of all of the city commission agendas from January 1, 2016 until April 16, 2020 lookin for anytime this program had ever been discussed or funded..

Here is the response I got back. 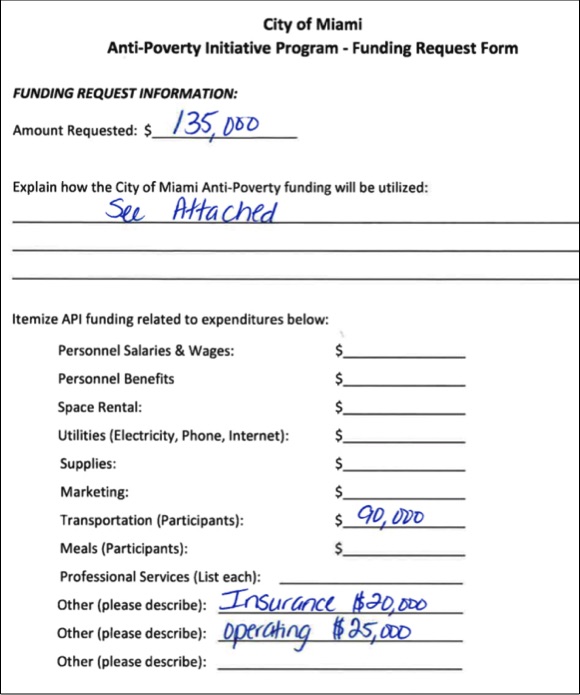 Blondet's letter went only so far however, and for some reason someone inside the agenda office decided to do me a favor by including the application that Christina King had submitted  for this money.To look at the actual application, click HERE.

According to King, the program is intended to buy cars for, "up to 10 families," at lower interest rates."

But there is a question of whether this is true. First because, "up to 10 families," could just as easily mean as few as 3 or 4 families, and secondly, there is the question of why $45,000 of the $135,000 is going to cover insurance and operating costs.

Because this money involves the Hardemons, you always have to start thinking that the only good deeds that these people do always comes with a personal benefit for them.

In this case I believe that the purchase of cars for folks in District 5 is just part of the 2020 Hardemon political campaign operation.

What do all of these campaigns need?

People with cars who can do errands, chauffeur the candidates around and take people to the polls to vote.

It's always a problem to get reliable people to do these things, but if you start now, go out and buy cars for people who would then feel committed to repaying the favor by doing whatever the Commissioner, Christine King oR Uncle Roy needs, and have the gas paid for from the $25,000 earmarked for operations, then how sweet would that be.

There's absolutely no fear by any of these politicians that anything bad could come from this kind of bullshit hustle because you'll never find that in the last 20 plus years anyone from the City of Miami has ever bothered to question or go and look at how any of these millions and millions of dollars that the mayor and Commissioners have spent on supposed anti-poverty efforts has ever actually been spent without a portion being syphoned off for one political slight-of-hand deal or another.

As the virus and resulting lock-down have revealed, large chunks of the city of Miami are populated by people who are as poor as dirt.

Yet, after 10 years of supposed public service, first as a commissioner and now as the Mayor, Francis Suarez seems as shocked by what he's seen at food bank giveaways as someone who had only arrived in town yesterday.

Worse, after all but abdicating all of his responsibilities to newly elected Alex Diax de la Portilla he now responds to anything that Diaz de la Portilla says or does like a hostage with Stockholm syndrom who had fallen in love with his captor.

Two responses, and neither one had anything to do with a MLK Wheels To Work Program.

A letter from Lillian Blondet the Director of Grants Administration to City Manager Art Noriega that was included as part of the agenda packet explained what the program was and went part way to explaining how the $135,000 would be spent. 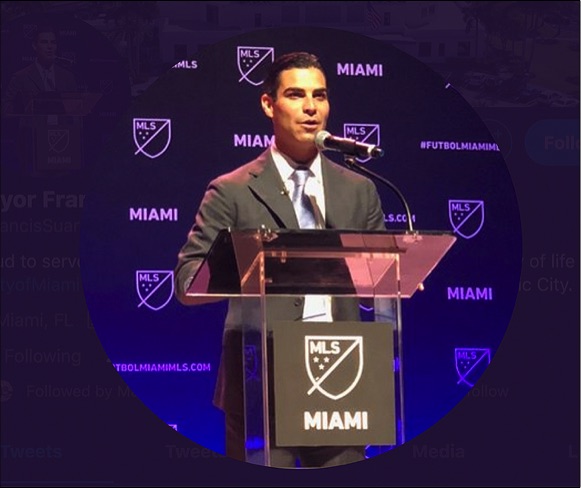 PHOTO OF THE DAY- WHEN IS FRANCIS SUAREZ GOING TO REALIZE THAT THE BACKDROP BEHIND HIM IS DATED? TIME FOR A NEW PHOTO, MILLENNIAL LEADER 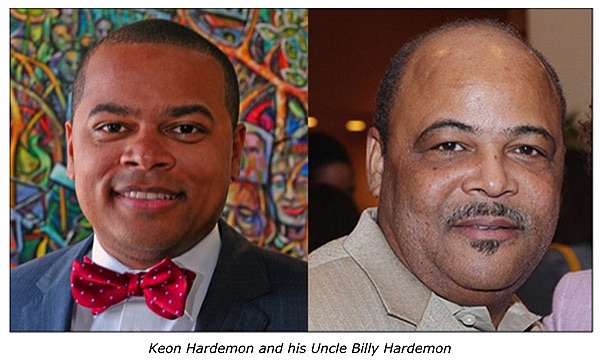