I FINALLY GOT A COPY OF THE COVID 19 TESTING CONTRACT THAT JOE CAROLLO WANTED SO DESPERATELY TO CLAIM CREDIT FOR, AND AS USUAL, I WAS RIGHT TO FIGHT TO GET IT RELEASED

In the last several days I've posted on Twitter copies of correspondence that I had with Miami City Attorney Victoria Mendez and with Noriega about their refusal to turn over any documents related to this deal, and finally late yesterday afternoon I was provided with a copy of the contract that Noriega had entered into, and then cancelled with AEGIS 19, LLc.

This it turns out was the company that would have provided the testing for the COVID 19 virus of city of Miami residents at Charles Hadley Park.

I follow a pattern when I get documents like this contract, and the first thing I did was to search for verification that the company is legitimate, who the owners are, and what their history is in the delivery of services.

The company that Flechas identified in his story was Witt Global Partners, and that company is identified as a, "bipartisan government relations and business consulting firm," with Little Rock, Arkansas, and Washington, D.C., addresses.

The company that the city actually signed a contract with is called AEGIS 19 LLc, and their address is, 10809 Searcy Building, Executive Center Drive, Plaza 1, Little Rock, AR.

According to this website, neither of these companies is registered in Arkansas.

This means that at best that when it comes to AEGIS 19, LLc, it is a brand new company, and/or that it is a company that while maintaining a headquarters in Arkansas, is registered elsewhere.

I suspect that it is probably a new company created specifically for this contract with the city, and now that they are no longer a city vendor, questions about the competence or ability to provide the services they were supposed to provide are no longer a question we need to focus on.

As a result, and as I've done now for so many years. my next point of interest was about money.

How much was the contract worth to the company, how much were the costs associated with the delivery of services, and did these costs justify a contract awarded without competitive bidding.

The complete contract can be found at the bottom of this story, but for now let's focus on Exhibit B, where these financial numbers are to be found.

As you will see, the rates included in the COST SCHEDULE that is part of Exhibit B of the contract show that all of the rates are based on hourly rates, and as exorbitant as they seem at first glance - because some of these folks are from out of town - you will see in small print at the top of the page that I've included below that these folks would also have gotten travel, per-diem and lodging.

Among the examples of a failure to look out for the taxpayers in this contract is that it has no provisions for what are known as "local hires," which is always important when talking about the expenditure of taxpayer money, and in this case when Miami is a city with qualified people sitting at home who might want to do the job.

Overhead and profit, are also cited but are not spelled out in any detail, which again is always a problem, especially when it comes to  city officials like the ones in Miami who have demonstrated a perennial habit of screwing the pooch, and letting favored members of the family and friends plan walk out the door with anything that isn't nailed down.

Lastly, at the bottom highlighted in RED are the projected weekly costs, which given that this contract was for an initial 6 month period, with two additional 6 month extensions means that this contract could have ended up costing the city, FEMA, or whoever ended up writing the final check millions and millions of dollars.

Among the other interesting discoveries is that for the 2nd time that I've gotten my hands on a contract dealing with testing for this virus, that City Attorney Victoria Mendez, for whatever reason, has chosen not to sign off on, but rather have one of her assistants sign on her behalf.

Mendez would argue that her responsibility is limited to, "Legal Form And Correctness," but the history of bad contracts approved by the city commission on the strength of the approval by the city's legal department has cost the taxpayers millions of dollars over the years.

To cite only one case, I refer you to the discovery by the city that they were on the hook for paying taxes on the money that they received from the lease of parking spaces in the garages they built at Marlin's Park because city attorneys failed to pay attention to the fine print that Jeffrey Loria's attorneys had inserted in the contract, and that prompted then Miami Mayor Tomas Regalado to proclaim his famous words, "In Miami, every deal is a bad deal."

After looking over this contract the question that stands out is not that a decision was made to terminate the contract before it started, but why, or how was this contract entered into to begin with?

If this constitutes the standard of due diligence and professionalism that the residents of Miami can expect from City Manager Art Noriega in dealing with any company looking to do business with the city, then the city could do just as good, or better by just snatching someone off the streets to negotiate contracts for them.

This is really a piss poor example of what one would expect from the new city manager who's being paid $310,000, plus benefits to manage the City of Miami, and the fact that it was cancelled is not reason for joy, but reason to wonder what other questionable contracts have been signed off on that no one knows about yet? 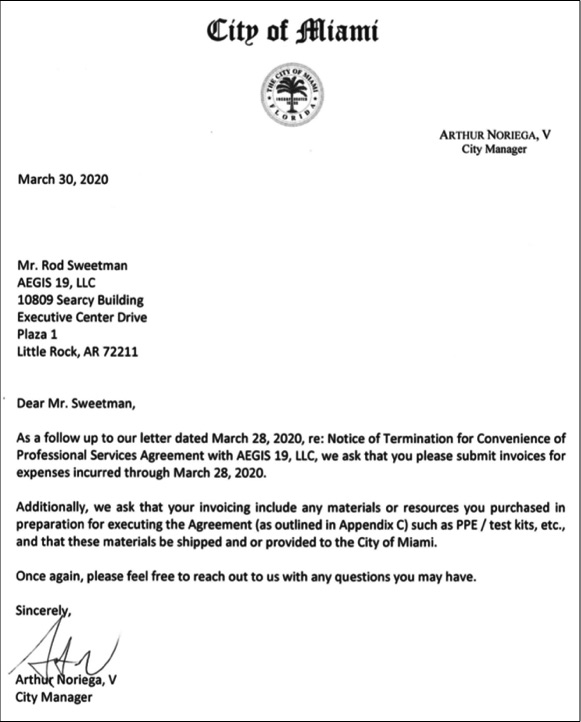 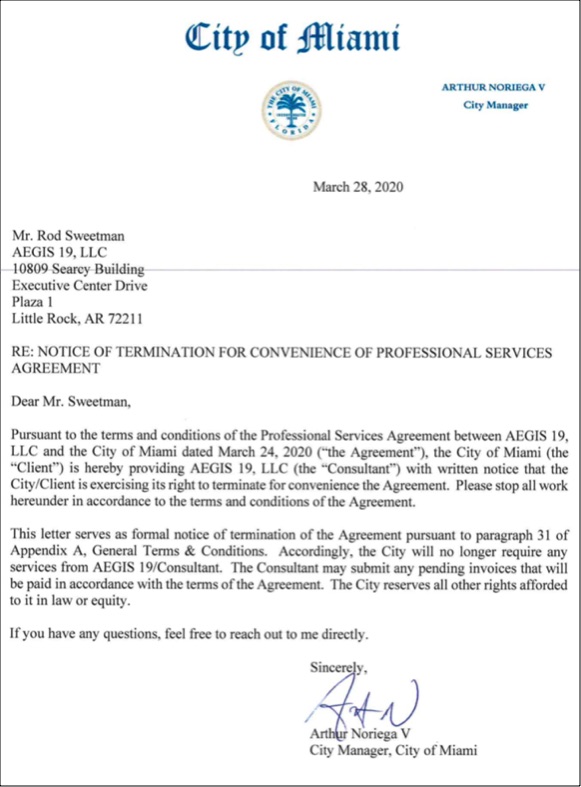 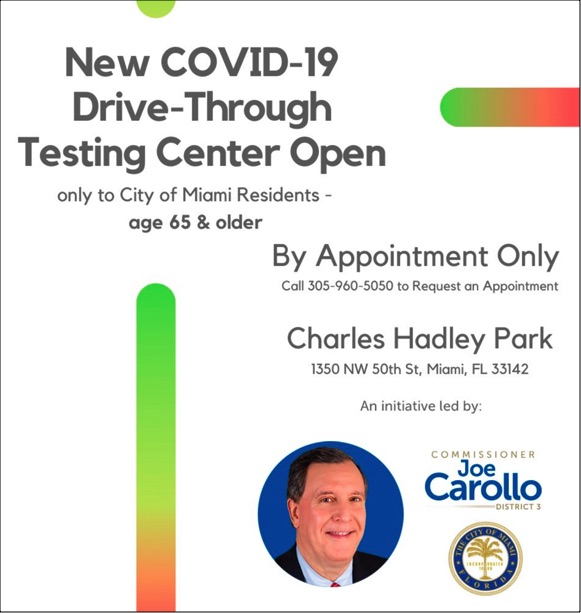 On March 20th, Joey Flechas of the Miami Herald broke a story about the possibility that a new company would become part of the effort to test residents in the city of Miami for the COVID 19 virus that included the following information:. 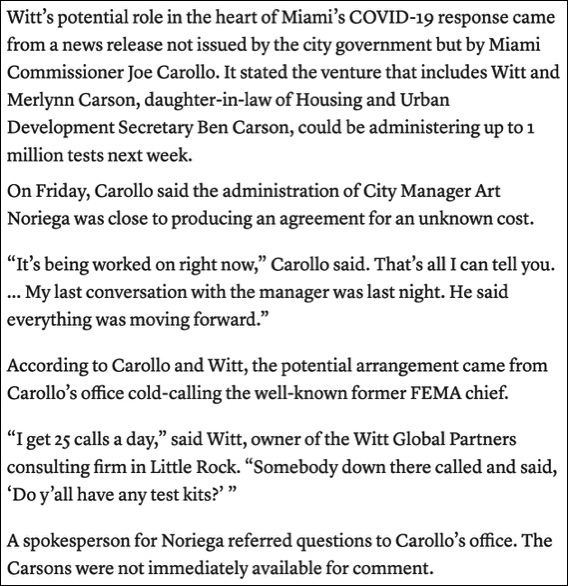 The fact that the initial press release came from Carollo was not unusual, because he has since the beginning of this crisis been especially aggressive in doing any and everything he could to generate any publicity that would offset the beating he was taking in the press and in his district over the recall efforts.

None the less, after getting a copy of the Carollo press release and reading Flechas' story, I proceeded to send my first public record request to Art Noriega, because I suspected that there was a lot more to this story than met the eye, and as you can see from my email to Noriega, even that early on, I smelled a rat and figured that I'd have to fight to get any documents. 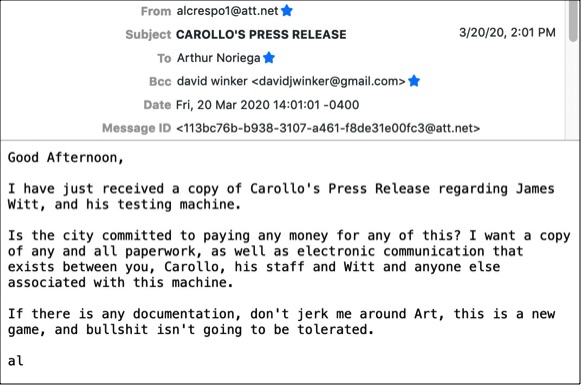 Carollo was so desperate to get credit for this deal that he violated a cardinal rule that exists among commissioners that none of them will try to take credit for something they've done in another commissioner's district. Hadley park is in District 5, and Carollo didn't even consider putting Keon Hardemon's photo next to his. For Carollo, this was all about him.