IN THE MIDST OF A PANDEMIC, AND WITH THE CITY SET TO LOSE TENS OF MILLIONS OF DOLLARS IN TAX REVENUE, COMMISSIONER ALEX DIAZ DE LA PORTILLA DECIDED THAT NOW IS THE TIME TO INSTALL A PRIVATE BATHROOM IN HIS COMMISSION OFFICE SO THAT HIS PRIVILEGED ASS CHEEKS DON'T HAVE TO TOUCH A TOILET SEAT THAT'S BEEN USED BY THE HOI POI

Never let it be said or imagined that Alez Diaz de la Portilla is a man of the people. He is an arrogant asshole with a sense of entitlement that make the average Beverly Hill's housewife look like a bag lady shopping at Goodwill.

For a while now I'd been hearing that he had wanted a private bathroom installed in his commission office - well before the Covid-19 virus came along - but that he'd used up the money allocated in his office redecoration budget, and so was trying to get his Stockholm Syndrome hostage, Mayor Francis Suarez to arrange for the costs to be debited to some other city account.

It seems like he finally succeeded because below is the Work Order for the installation of a bathroom in his office.

I've been told, but have not confirmed that the total cost for this build out could be in the neighborhood of $10,000 - $15,000, which while it might be considered chump change, but when it's added to all the other chump change money that the mayor and the commissioners are spending on themselves and their cronies it's beginning to add up to real money.

Of course, you'll never find any mention of any of these expenses in the so-called Budget Memorandums issued by the Budget Director, because his real job during this crisis is not revealing how many millions of dollars the city is going in the hole, but on how many millions are being funneled through, "emergency contracts" and other bullshit deals like this bathroom build-out, and how to make those money transfers look innocuous so that nobody starts raising an eyebrow and says, "Where in the fuck is that money going?" 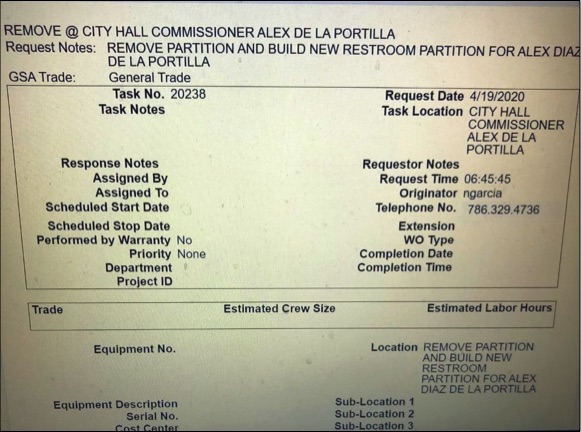 You cannot make this crazy shit up. The city is on the verge of going into a serious financial tailspin, and Diaz de la Portilla is getting a private bathroom installed.

I can't wait till he pipes up at the commission meeting on Thursday to talk about belt-tightening and financial austerity.

And don't think that this is the craziest thing that you'll hear coming out of City Hall.

The way things are going, Miami could become a prime location for a dystopic, science fiction nightmare real life movie of what can happen when stupidity, greed, incompetence and cowardice become the guiding principles of municipal governance in,