ART NORIEGA HAS SIGNED LARRY SPRING TO A $25,000 CONSULTANT CONTRACT TO DEAL WITH THE FINANCIAL EMERGENCY OF 2020 BECAUSE THERE'S NOTHING LIKE HIRING A DISGRACED FORMER PUBLIC OFFICIAL IN A TIME OF CRISIS TO ADVISE YOU ON YOUR FINANCES - AND YES, THIS IS THE SAME LARRY SPRING WHO WAS BEHIND A LOT OF THE BAD DECISIONS IN 2009 & 2010, AND WHO LISTS AMONG HIS ACCOMPLISHMENTS BEING FIRED A COUPLE MONTHS BACK FROM THE JOB OF BEING THE CITY MANAGER FOR THE CITY OF NORTH MIAMI, AND WHO WAS THE THE FRONT GUY IN TRYING TO BRIBE CHIEF OF POLICE MIGUEL EXPOSITO

It was bad enough back in May of 2018 when Art Noriega arranged to put Larry Spring on the board of the Miami Parking Authority, but now in a sign that Noriega does not have faith or respect for his current financial team, and because he's stupider than many people thought, he has signed up former City of Miami Chief Financial Officer Larry Spring to a $25,000 consultant contract to help guide him through the pending financial crisis brought about by the COVID-19 Pandemic. 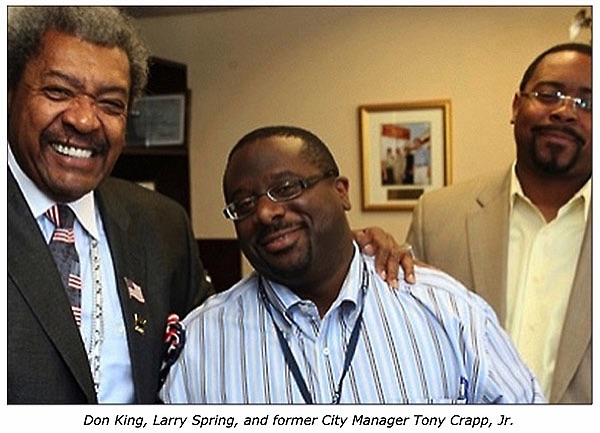 Spring's cover letter is the usual combination of blowing smoke up Noriega's ass with the,"I applaud your forward thinking and leadership,"and ends with the bullshit claim that, "I come equipped with the intimiate knowledge of the details of the new federal stimulas package and creative ideas on how to use the tools and resources available to the City to help ride through this crisis..."

Really, he has "intimate knowledge" of the details of the federal stimulas package. details which it seems even the Trump administration doesn't even know about, because this stuff is still being figured out and written.

It was his behavior - behavior that included the city being sued by the FEC for the way that the books were cooked - that led to many of the financial problems.

Over the time that Spring worked for the city a lot of very bad  things happened that included besides all of the financial stuff, his roll in the effort to bribe Chief of Police Miguel Exposito who was involved in battle with Mayor Tomas Regalado over the flood of illegal gambling machines in the city back then, thanks to Regalado's friendship with a handful of Cuban gangsters who were part of Cuban Mafia, known as, "The Corporation."

In June of 2011, Spring, with the help of then City Manager, Tony Crapp Jr., waltzed out of the city with a $125,734.56 Golden Parachute, and eventually he landed as the City Manager in North Miami, where he was fired in January of this year, and walked out with another Golden Parachute.

And now he's back and claims that he's the guy who can help guide the City of Miami through this latest disaster, and it seems that Art Noriega is more than happy to roll out the Welcome Mat!

The general ledger for March closed on April 9, 2020, closing the second fiscal quarter and completing half of the current fiscal year.  Slightly less than half of the month was affected by the COVID-19 pandemic.  The Office of Management and Budget (OMB) has completed a thorough analysis of revenues and expenses and produced the attached detailed reports.  Hard data regarding revenues are lagging normal reporting times while expense data continues to be much more “real-time.”  Because of this, very few revenues have been updated since the April 9, 2020 projections, while all expense projections have been updated.  This projection, like the last one, presumes that the City will remain in a similar situation to the current State of Emergency with recommendations to shelter at home and a mandatory curfew for a total of two months, and presumes that revenues will increase to near prior levels after those two months.

Overall actual revenues received year-to-date in the General Fund through February 2020 (41.8 million), were 7.6 million higher than through the same period last year (14.2 million).  This represents approximately 67.0 percent of General Fund budgeted revenues collected already this year, with most of the year’s Property Taxes already collected.

In conclusion, presuming a two-month heightened COVID-19 situation, the City of Miami is currently projected to have a net end-of-year deficit of 9.7 million (with a deficit of 5.8 million in the General Fund, and a surplus of .1 million in the Internal Service Fund).

Should you or your staff have any questions or concerns, please do not hesitate to direct them to me at 305-416-1500 or crose@miamigov.com.