THIS MORNING THE CITY OF MIAMI WILL GO TO COURT TO SEEK A PROTECTIVE ORDER THAT WOULD BLOCK JOE CAROLLO AND ALEX DIAZ DE LA PORTILLA FROM BEING QUESTIONED IN THE LAWSUIT FILED BY STEVEN MIRO AGAINST THE CITY. NOT ONLY DOES THE CITY'S MOTION READ LIKE IT WAS WRITTEN BY A MOB LAWYER, BUT IT RAISES A VERY SERIOUS QUESTION OF WHY THE CITY ATTORNEY WOULD BE TRYING TO REPRESEENT THESE GUYS ON THE TAXPAYER'S DIME WHEN ONE WAS A PRIVATE CITIZEN AT THE TIME, AND NEITHER IS NAMED AS ADEFENDANT IN THE CASE

I have repeatedly written that the City of Miami operates like an organized criminal enterprise and I know some people get upset when I make that claim, while others think that I'm just engaging in hyperbole.

Unfortunately, I've been very serious when I've made that claim, and in the next few days I'm going to be doing a series of stories that will underscore that what's been going on inside of Miami City Hall since Joe Carollo showed up is no different than the criminal behavior that has put other City of Miami officials in jail, and is as lurid as the crimes described in many crime novels and movies.

No organized criminal enterprise could get far without a criminal lawyer experienced in the ways of protecting their client, and in Miami, City Attorney Victoria Mendez for inexplainable reasons has become the equivalent of Carollo's mob lawyer.

Since Joe Carollo's return to the commission, Mendez has repeatedly gone out of her way in expanding the legal services of her office to provide him with legal advice, pay for private attorneys to defend him against the rash of lawsuits that he's become a defendant in,  and now her office is going to court today in an effort to try and get a judge to deny Miro's attorney the opportunity to depose him.

If that fails, Mendez hopes to get the judge to seal the results of the deposition because of a fear that either Carollo or Diaz de la Portilla might reveal criminal activity under oath.

In Diaz de la Portilla's case, the actions that he was alleged to have engaged in occurred when he was a private citizen running for a county commission seat, which raises a question of why would the Miami City Attorney be representing him, which in turn raises the larger question of who does the City Attorney really represent?

A lot of people are mistaken in believing that the City Attorney represents the citizens. She does not.

Mendez was hired by the City Commission and her job is to represent them and the administration of the city, much in the same way that the general counsel of a corporation represents the officers and the board of a corporation, and not the shareholders.

Motion for Protective Order by al_crespo on Scribd

What if Alex Diaz de la Portilla had sold cocaine before he was elected to the Miami City Commission, and although never arrested, was called as a witness in a case involving his cocaine wholesaler?

Would the City Attorney show up in court to try and block Diaz de la Portilla's being deposed, even though he, "was not an elected member of the Miami Commission nor a city employee," at the time he hypothetically engaged in dealing drugs?

Only a crazy person would agree that the taxpayers should foot the bill to try and keep Diaz de la Portilla from being questioned on activities that he engaged in while a private citizen, yet Mendez is going to court this morning to and do just that.

The other representation issue involved Carollo, who is also NOT a named defendant in this case, but is involved because Miro worked for him when he was fired.

If I had the time and an access to a law library, I'd probably devote more time to this issue, but quite frankly, the real issue before the court this morning is less about who represents Carollo or Diaz de la Portilla and centers on why the City Attorney is not only going to try and argue that they should be protected from being deposed, but if she fails at that is going to try and get the judge to seal the depositions from public view.

Like any criminal lawyer who has a gangster for a client, Victoria Mendez knows that her client Carollo has allegedly engaged in some pretty shocking criminal behavior and therefore doesn't want anyone to know about what he's done.

The difference here is that she's not a criminal attorney, but the City Attorney of Miami, and in trying to protect Carollo, she's acting against the best interests of the city and her oath of office to protect the city aand it's residents from an elected official engaging in alleged criminal behavior: 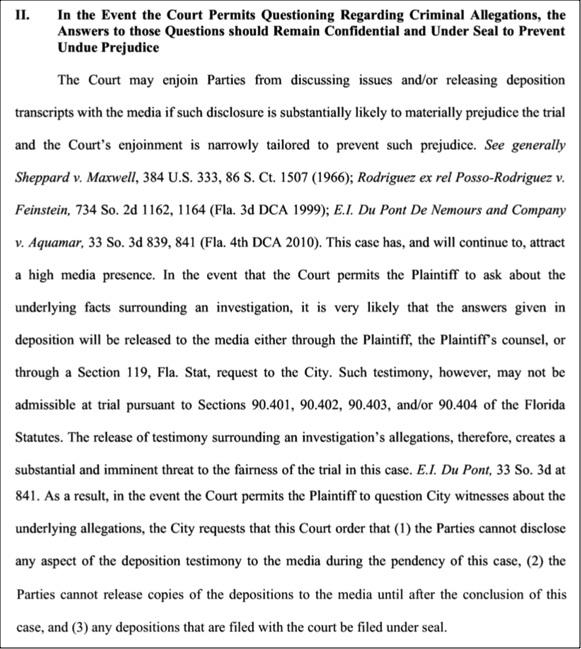 The irony in the City Attorney trying to keep any revelations about possible criminal behavior a secret, is as they say, like trying to shut the barn door after the horse has gotten loose.

You see, I have documents and videotape that reveals the kinds of criminal behavior that Carollo been alleged to have been up to, and I will be revealing all of that information in the next parts of this series next week.

Understand also that this motion by the city is just part of a larger series of motions and actions that the city has taken in this lawsuit and others that have resulted in counter-motions seeking sanctions against the city, all pointing towards an eventual bar complaint being filed against Mendez and some of her staff for multiples examples of unethical behavior.

It's been a long time coming, but I can now with claim with some confidence that at long last somebody might actually end up going to end up in jail over all this bullshit, and it can't come soon enough!

The City Attorney for the City of Miami, whose $225,000 salary is paid for by the taxpayers is going into court today not to seek truth nor justice but rather to try and protect two Miami City Commissioners, Joe Carollo and Alex Diaz de la Portilla from having any admissions that they make under oath revealing that they might have engaged in criminal behavior be kept from the news media and the public.

If that doesn't constitute the behavior of a mob lawyer, then nothing does!

Here is her full argument in Black and White.