WHEN JOE CAROLLO DECIDED TO GET RID OF STAFF MEMBERS STEVEN MIRO AND RICHIE BLOM, HE TRIED TO FORCE AT LEAST ONE WOMAN ON HIS STAFF TO MAKE FALSE STATEMENTS AGAINST THEM. WHEN MIAMI CITY ATTORNEY VICTORIA MENDEZ FOUND OUT THAT THAT WOMAN WAS GOING TO BE SUBPEONAED TO GIVE A DEPOSITION, SHE TRIED TO PROTECT CAROLLO BY GOING TO COURT AND FILING MOTIONS TO PREVENT THE WOMAN FROM BEING REPRESENTED BY ANYONE OTHER THAN ONE OF HER ASSISTANT CITY ATTORNEY'S. IT'S A STORY THAT RAISES QUESTIONS ABOUT ABUSE OF POWER AND LEGAL ETHICS

MIRROR, MIRROR ON THE WALL

Wikipedia defines psychological projection is a defence mechanism in which the human ego defends itself against unconscious impulses or qualities by denying their existence in themselves while attributing them to others. For example, a bully may project their own feelings of vulnerability onto the target.

No better example of this phenomena exists than this short video clip of Commissioner Joe Carollo delivering a 2018 rant about how sickened he became after discovering upon his return to the city commission the number of slimy people he claimed he was forced to shake hands with.

In truth, the slimmest person that the commissioner meets on a daily basis is himself anytime he looks in the mirror.

His behavior as a city commissioner has revealed that in the years he was away from public office he managed to become a more reprehensible, vindictive and abusive human being than when he acquired the moniker, "Crazy Joe." 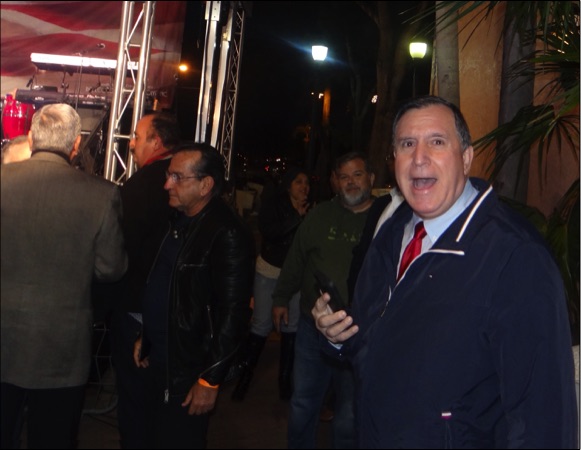 Today's story is a window into how Joe Carollo allegedly forced an employee in his commission office to lie in an effort to portray several of his employees and sexual predators, and the lengths that the City Attorney went to in trying to silence this woman from revealing that information in a deposition.

IT STARTED AS A FAMILY AFFAIR

Last August, a young woman named Tanjha Quintana rear ended a boat being towed to the Dinner Key Marina on her way to work at Joe Carollo's commission office at City Hall, and was arrested for driving while drunk.

At the time, I half jokingly wrote that she was probably not the only Carollo employee who went to work in the morning either drunk, or with trepidation about what the day could bring.

Several months later, one of my sources during a random conversation about the usual goings on at City Hall told me that there was a lot more to the story of this young woman and her relationship with Joe Carollo, and suggested that I should start digging.

Tanjha Quintana I discovered, was the niece of the husband of Joe Carollo's sister-in-law, Marlene Garcia, who I had previously written about as receiving $12,500 from Carollo for doing something - or maybe nothing - during Carollo's effort to derail Francis Suarez's effort to become the strong mayor of Miami.

Jerry Iannelli, then at Miami New Times did a more detailed story the following day about Marlene that revealed that her husband - and Tanjha's uncle - was a guy named Vincente Garcia.

This is what Iannelli wrote about him. 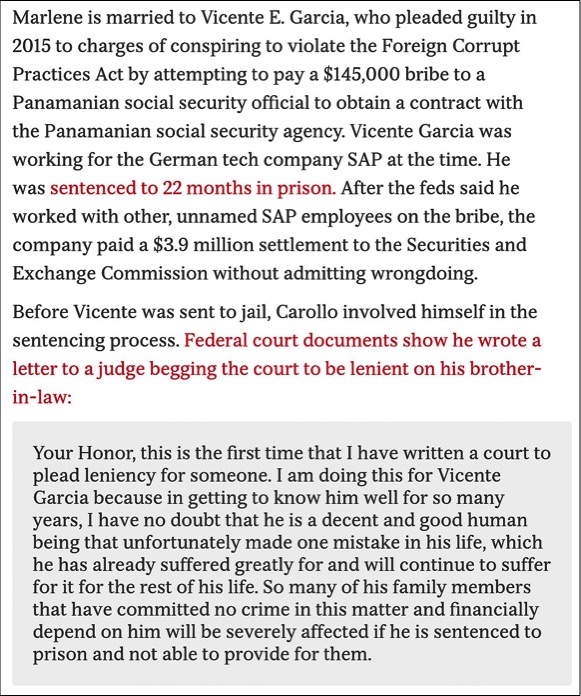 Quintana it seems had been hired by Carollo because of the family relationship between her mother and his wife Marjorie sister Marlene, and consequently, blood being thicker than water, she was expected to do whatever was asked of her.

NOTE: I must pause for a moment to explain that the basis for this  complicated story includes a 134 page deposition, a separate 16 page highlighted portion prepared by Miro's attorney, along with a video of that deposition and numerous court motions and counter motions filed by the City Attorney's Office, and the attorneys for Steven Miro and Tanjha Quintana. Excerpts from some of those documents appear in this story, and all of them can be found at the bottom of this story, or on a separate page, HERE.

On June 4, 2018, Steven Miro, who had worked with Carollo on his campaign, and had been hired to be the District 3 Liaison was fired after Carollo discovered that he had been talking to the State Attorney's office about what he believed to be illegal activities engaged in by Carollo, including the Paella-Gate incident involving Alex Diaz de la Portilla.

Shortly after, Miro was fired, Tanjha Quintana and the other women who worked in Carollo's commission office were asked to write statements about Miro's behavior in the office.

Those statements and the testimony of several of the women were part of the Civil Serice Hearing on Miro's firing.

In her deposition under direct examination by Miro's attorney, Quintana was asked about that statement and whether she had had any help or input into what she wrote:

Seth Sarelson, Miro's attorney ended his questioning of Quintana at this point obviously believing that any testimony about what had transpired between Quintana and Carollo over Richie Blom would not necessarily be of use in Miro's case.

Kevin Jones, the Assistant City Attorney thought otherwise and pulling on the string provided by Quintana's claim that Carollo and his sister-in-law had pressured her into lying about Blom pushed on and got Quintana to reveal how her statement about Richie Blom had been written, and more importantly, who actually wrote it. (Pages 72-73 of the transcript.)

Highlighted Portion of Depo... by al_crespo on Scribd

Under cross-examination by Assistant City Attorney Kevin Jones  Quintana admitted that although Carollo has wanted her to accuse Miro of sexual harassment she had refused, nor did she mention it during her testimony before the Civil Service Board. (Page 41 of the transcript.)

Quintana also admitted that even though Carollo and his wife had brought her to their house and pressured her into writing the statement accusing Miro of sexual harassment she was not punished by Carollo for refusing to do so.

When I started looking into Quintana's involvement in this case it was because I had been told that she was remorseful over how she has been used by Carollo and wanted to tell the truth even if it required admitting that she had lied or perjured herself in the process.

In legal proceedings, these kinds of admissions are often referred to as a, "Statement Against Interest."

Statements Against Interest are often viewed by courts to be credible on the basis that the individuals involved making them could, by simply keeping quiet, evade, or avoid the consequences of their admissions.

Her claim therefore, that Carollo and his wife had attempted tgo pressure her, in front of her mother, to lie about Miro sexually harassing her actually gave more credence to her subsequent claim  several months later that Carollo once again pressured her to lie in a statement that he demanded she write about his former Chief of Staff, Richie Blom.

On August 2nd, Joe Carollo wrote Richie Blom, his Chief of Staff to inform him that because he had been absent from the office for 7 weeks as a result of illness, he was, "deemed to have resigned immediately."

Instead of leaving it there, Carollo turned to Quintana for a statement alleging, like he had tried to get her to do with Miro that Blom had  sexually harassed her. (Pages 22-23 of the transcript.) 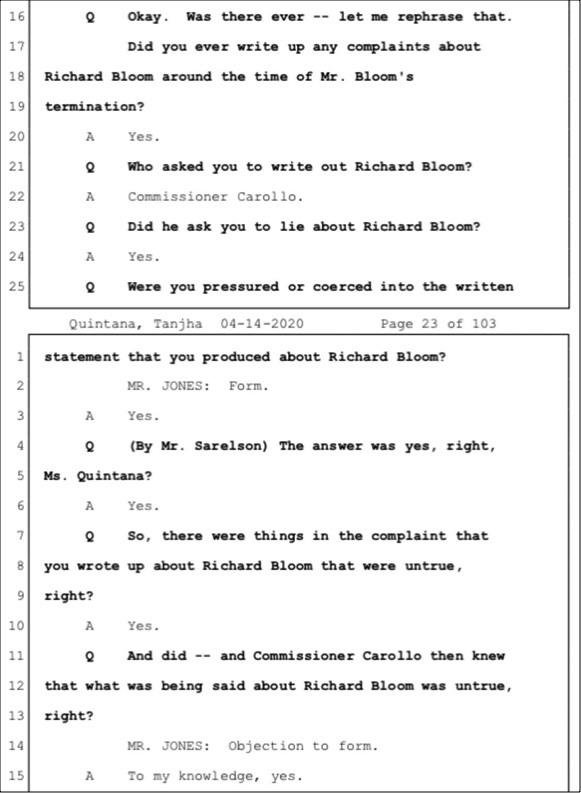 Under further questioning by Jones, Quintana revealed that in addition to Carollo, her uncle Vicente Garcia had also been present and had played a part in pressuring her to lie about Blom. (Page 80 0f the transcript.)

On March 6th, on learning that Quintana was being subpoenaed by Miro attorney to give a deposition, Kevin Jones, from the City Attorney's office  filed an emergency motion in an attempt to block attorney David Winker from representing her, claiming that as a former city employee they were invoking the existence of an attorney/client relationship because:

(and other members of the office) where, for over a year, our mental

impressions of the claims, strategies for defense and confidential

information was shared in preparation for the defense of not only

the administrative hearing but also the present suit."

While the city's arguments were frivolous and specious they took on a life of their own as motions and counter-motions filed by the city, David Winker the attorney representing Quintana and Seth Sarelson representing Miro resulted in the judge hearing Miro's case recusing herself, and the city, after climbing out on a limb until it was evident that the limb was on the verge of breaking, did an about face, and on March 19th voluntarily withdrew it's motion objecting to Winker representing Quintana claiming that they were ready and eager to go to court to try and case on the "facts."

Although the city dropped their objection, attorney David Winker had as part of his response petitioned the court for sanctions against Mendez and Jones for their actions in trying to block him from representing Quintana.

That hearing will take place on Tuesday before Judge Eig, who last Friday ruled against the city in their effort to protect Commissioners Carollo and Diaz de la Portilla from being deposed in this case, and if they were deposed, that their testimony be sealed in case it revealed possible criminal activity.

The issue of sanction in this matter is not an inconsequential issue. Attempting to block a person from being able to be represented by an attorney of their choice is antithetical to the foundations of our system of justice, and to do so on the basis of trying to protect a city commissioner with a long history of documented misbehavior against everyone from his wives, the residents of his district and his staff represents a serious abuse of power.

Abuse of power has been evident in many of the decisions made by City Attorney Victoria Mendez as she has turned the city attorney's office into the Carollo Legal Defense Office.

At some point, this has all got to come to a screeching halt, and the question is, when will that time come? 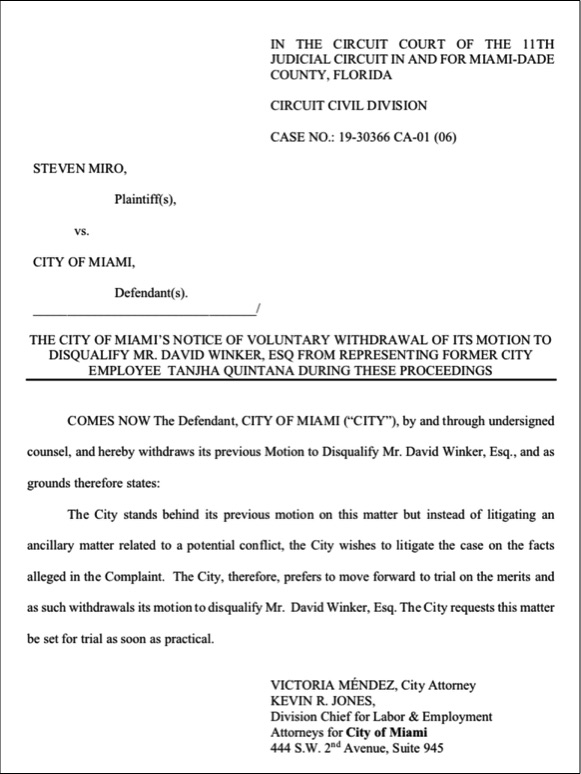