QUESTION OF THE DAY - I AM HEARING FROM MEMBERS OF SOLID WASTE LOCAL 871 THAT THE CITY HAS BEEN UNABLE TO OBTAIN ENOUGH PERSONAL PROTECTION GEAR FOR THE GUYS PICKING UP GARBAGE, AND THAT EVEN THOUGH THEY NEED THE MONEY SOME OF THOSE WORKERS ARE ALREADY STARTING TO STAY HOME.

IS THERE A PLAN B? ANYBODY GOT ANSWERS?

On March 5th, a formal letter was written and sent by newly appointed City Manager Art Noriega, to the Event Entertainment Group that produces the ULTRA Music Festival notifying them that per contract provisions the event was being "postponed," and that asked the company to provide alternatives dates beyond March and April of 2020.

Here is that letter.

THE ULTRA POSTPONEMENT DEAL IS BACK ON THE AGENDA, AND IT'S JUST AS SKANKY A DEAL AS IT WAS WHEN THE MAYOR TRIED TO SNEAK IT THROUGH AS A POCKET ITEM AT THE MARCH 12TH MEETING

Letter to ULTRA by al_crespo on Scribd 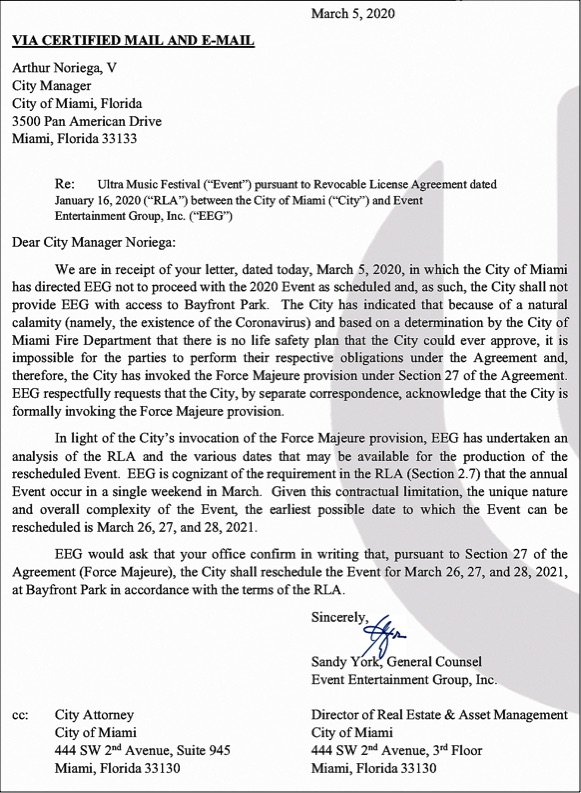 That same day, the company responded with this letter, stating that the best days that they could come up with was March 26,27,28, 2021.

I obtained the above letters through a public record request to the City Manager. I made a similar request to the Mayor, and I was told that he had no documents, but just to make me happy, I was sent several other emails that has no relevance to ULTRA or this postponement.

What is telling about these letters and email responses is that nowhere in the exchange of letters between Noriega and Event Entertainment is there any mention of the agreement that the Mayor tried to get the commission to agree to when he introduced his Pocket Item that would have granted ULTRA an additional year extension on their, "Revocable License Agreement."

And in fact, following the March 12th meeting, I asked for a copy of the document that the Mayor kept referring to during the time he was trying to convince the commission members to agree to his Pocket Item, and was told that no such document had been submitted into the record.

In short, the Mayor introduced a Pocket Item - one that would have a financial impact on the city - yet failed to provide any documentation in support of that item - and after a half hour or so of debate, the commissioners refused to agree to the Mayor's item, and it now shows up on the agenda for the April 9th meeting.

As interesting as all of that is, we have to backtrack to the beginning by asking the first question that needs an answer, which is why did Art Noriega inform Event Entertainment Group that he was "postponing" the event, and not cancelling the event like he did in the days that followed with the Calle Ocho Festival?

Postponing and Cancelling mean different things in legal terms, and the city could have as easily cancelled the ULTRA Music Festival as "postpone" it.

All of that supposedly has to do with a private meeting that took place between the Mayor, Commissioner Joe Carollo and several representatives from Event Entertainment, including I was told one of the principals of the company, in which the real terms of this deal were reached.

Terms which no one wants to reveal, or even admit exists.

Even though they hate each other, and Carollo will never pass up an opportunity to embarrass or humiliate Suarez in public or private, they joined forces at this meeting because I was told that as much as they hate each other, they both hate Miami-Dade County Mayor Carlos Gimenez even more.

Suarez and Gimenez have been battling now for some time now over the Coconut Grove Playhouse, but until recently it was believed that Carollo and Gimenez were bossom buddies. That seems to no longer be the case, although I haven't a clue as to why.

In any event, at the time this meeting the decision to seek an agreement was as much, if not more about an effort to challenge and embarrass Gimenez who during the time that the meeting took place was still refusing to shut down any events in the county.

Of course things started changing days after March 12th, and as we now know the virus has turned into a world-wide calamity, but back then, personal vendetta political plays were about as far as Suarez and Carollo could think into the future.

On the ULTRA side, this meeting and the decision by Suarez and Carollo to support a "postponement" was a real gift because I've been told that contrary to all their pronouncements about how great things were going to be in 2020, the truth was supposedly different because after the disaster that has occurred on Virginia Key last year the ULTRA folks were supposedly further away from selling out the event than the 90% they were claiming on their webside on March 6th: 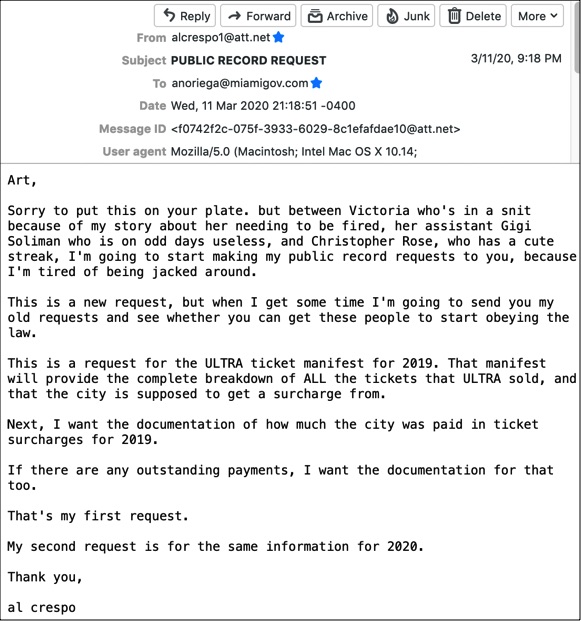 On the one hand, the refusal to respond to public record requests that might produce documents that prove to be a problem for city officials has become a staple in the city of Miami, where obtaining public records can often become knock-down, drag out battles that only get resolved after a threat of a lawsuit.

In short, this is business as usual in the city where people like recently elected Alex Diaz de la Portilla like to brag about their transparency,  while the City Attorney and her staff berate me, call me names, and even imply that I am a heathen requiring being prayed over while doing everything they can to not comply with my public record requests.

Therefore, the fact that I've yet to receive copies of these TICKET MANIFESTS is not surprising, but it is revealing because that refusal supports a claim that at the meeting that the Mayor and Commissioner "Comemierda" attended with the ULTRA folks a deal was cut that went far beyond the screwing city, and the folks who live downtown and are part of the Downtown Neighborhood Association, to an attempt to screw the thousands of ticket holders.

The screwing comes in two parts.

Part one is that if the city commission goes along with the deal that gives the ULTRA folks an additional year as the Resolution claims that the city's administration wants to do: 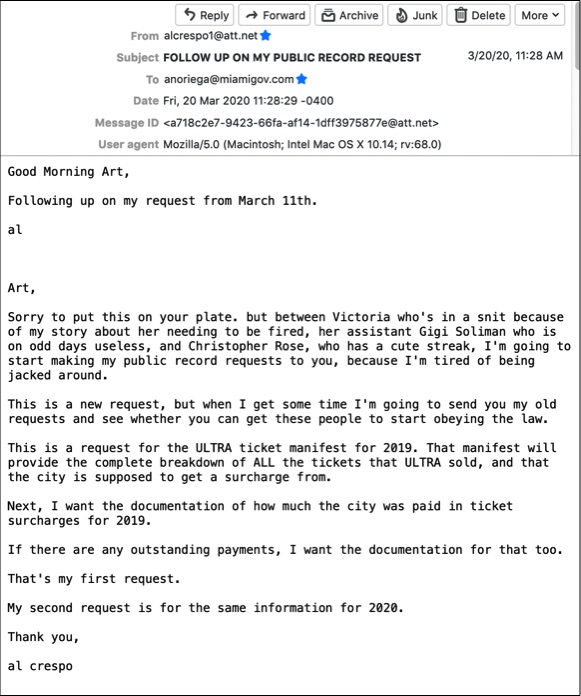 Noriega neither acknowledged or respond to my request, and so on March 20th I sent him a reminder.

In fact, I had been told that they had been looking for the city to cut them some financial slack if they weren't able to sell out the event.

Now, as I say, this was a rumor, and would normally have been unverifiable, were it not for the fact that every year the ULTRA folks have to provide the city with a TICKET MANIFEST that provides a detailed accounting of ALL the tickets they sell so that the city can know how much money they are supposed to receive from the Ticket Surcharge they impose on the sale of tickets to this event.

On the evening of March 11th, before Francis Suarez's unsuccessful effort to get his Pocket Item passed, I sent Art Noriega the following email that requested copies of both the TICKET MANIFEST for 2019, AND 2020.

This acceptance of this language by the city commission will constitute a material change in the "Revocable License Agreement," turning it into a defacto contract that gives the ULTRA folks legal rights should the city decide for any reason to change their mind again.

Here is the portion of the 2020 contract, (Page 2), that illustrates that: 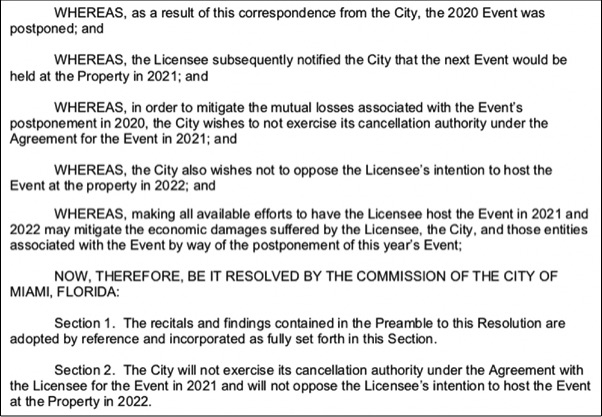 By the city agreeing beforehand that it, "will not exercise it's cancellation authority under the agreement" in 2021, and "will not oppose the License's intention" to host the event in 2020, it waives the 60 day window the city granted itself to make a decision at that time as to whether they wished to extend the "license agreement," and this is clearly a material change favoring the "licensee" which does confer "leasehold rights."

Not only that, but it also allows the ULTRA people to stage the loudest and most raucous event in 2021 they want without fear of being shut down, or of not being able to come back in 2022.

IT'S ALWAYS ABOUT THE MONEY

The other difference between "postponing" the event and "cancelling" the event, was that if the event had been cancelled the promotors would have had to refund all the ticket money.

By postponing the event, the city setup the ticket holders to get screwed over by the promoters because days after claims that the ticket holders would be reimbursed, they announced that they would NOT refund the ticket money, but would credit those tickets for use in either 2021 or 2022.

So lets walk through this,

First, the city should have already been provided both the TICKET MANIFEST and payment for the 2019 event held at Virginia Key, thereby allowing us to know just what the real ticket sales were and what the payment to the city was.

I say should, because the refusal of Art Noriega to comply with my public record request means that we don't have that information.

Secondly, since the ULTRA folks informed the ticket holders that they're not getting refunds on their tickets, then the city should by now have received a TICKET MANIFEST for ALL the tickets sold for the March 2020 even, given that sales ended on March 6th.

That's another question that no one seems to have an answer for.  Did ULTRA stop sales on the day they received the postponement letter from Noriega, or did they continue selling tickets?

We don't know that either.

We don't know a lot of things, and the biggest thing we don't know is how much if any of the deal that was reached by Suarez and Carollo in a room with the door closed was memorialized in any kind of document?

Again, like so many other deals done by the city, this becomes an issue of transparency, and also, given that Carollo had so often berated Suarez and the former City Manager about the fact that they, and not the administration are the "legislators," his attendance and participation in negotiating a deal that he's never presented to the Bayfront Park Management Trust, and now will vote on raises a question of whether his next role will be to sit as the judge when the lawsuit is filed if this Resolution is approved at next week's commission meeting.

Carollo only argues about principles as long as they don't conflict with his personal agenda. When that happens, he's more than happy to jump behind the wheel of the biggest truck available and run over any principles that get his way.

What we do know is that not all of the tens of thousands of folks who paid for tickets for the 2020 event were happy or in agreement to accept ULTRA's offer to credit them for tickets to the 2021 or 2022 events.

It's probably not going to work out well for these ticket holders because Event Entertainment Group, who produces ULTRA created a legal degree of separation from the ticket holders by selling tickets through a company called TICKETFREAK,LLC. 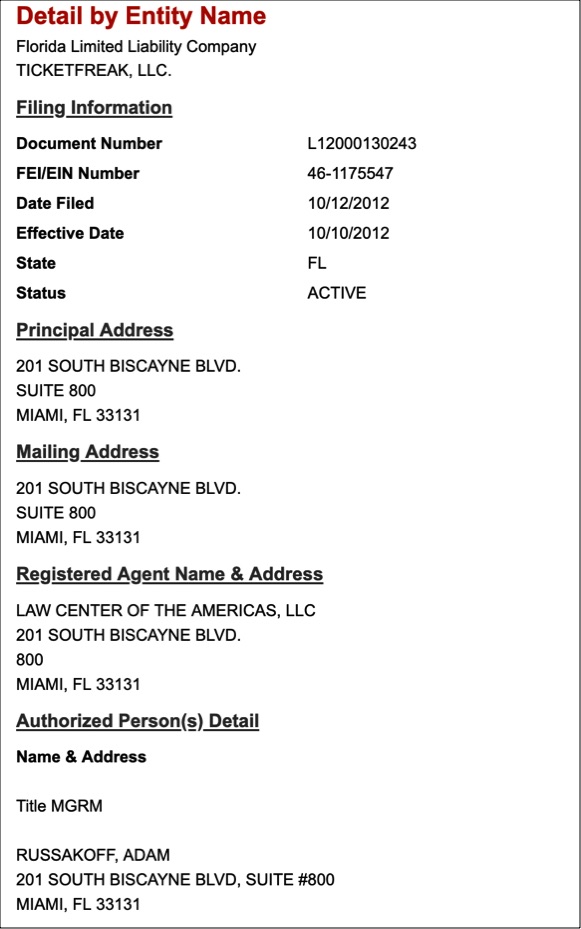 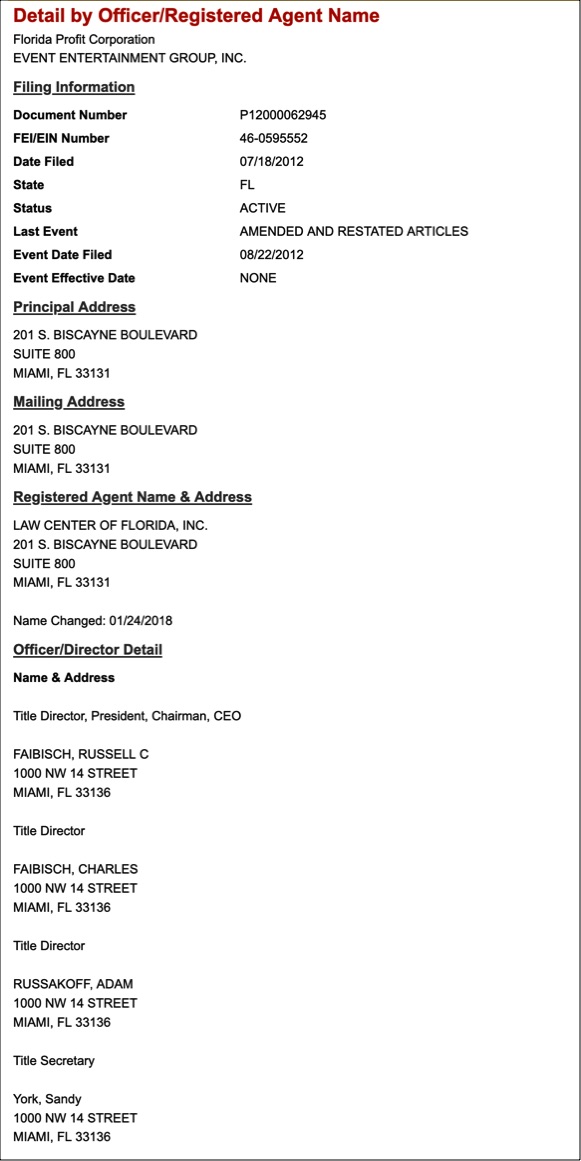 Adam Russakoff, in addition to being the MGRM for TICKETFREAK LLC, is also a Director in Event Entertainment Group.

You can bet that just as quickly as the money for tickets entered the TICKETFREAK LLC bank account through one door, it was being transferred out through another door, leaving this Limited Liability Company with little or no money to deal with irate ticket holders looking for a refund.

While the city might be legally protected from all of this, their behavior clearly falls under the rubric of aiding and abetting the ULTRA folks in screwing ticket holders out of ticket refunds by agreeing to a postponement instead of a cancellation.

But then again, It's Miami, Bitches!

HERE IS THE RESOLUTION COMING BFRFOE THE COMMSSION NEXT WEEK