THE SCHEMERS AT CITY HALL PROVE THAT CRESPODAMAS WAS RIGHT AGAIN. REMEMBER WHEN I STOOD AT THE CITY COMMISSION MEETING IN JANUARY OF 2018 AND TOLD FOLKS THAT THERE WERE FORCES WHO DID NOT WANT TO SEE THE OMNI CRA EXTENDED TO THE WEST GROVE?

As part of the shit show tomorrow, there will be a meeting of the OMNI CRA, that includes the following Resolution:

One of the reasons that Alex Diaz de la Portilla wanted to replace Commissioner "Sellout" Russell as the Chairman of the OMNI CRA was to do away with his efforts to extend the OMNI CRA into the West Grove, which is something that will no doubt make former Commissioner Marc Sarnoff happy.

Sarnoff spent much of his term as a city commissioner screwing the Black folks in the West Grove, and now that he's got playmates like Diaz de la Portilla in his pocket, you can expect that this will not be the last time that the ghost of Sarnoff shows up in language screwing those folks over, because once a racist cracker, always a racist cracker.

The premise behind the extension of the CRA into the West Grove was not in and of itself a bad idea because the original intention behind the creation of CRA's was to eliminate "slum and blight," and it has been done in some parts of the state without the usual kleptocracy that passes for governance in South Florida, but while Diaz de la Portilla is now moving to kill off the effort to extend the CRA into the West Grove, he is 100% committed to extending the OMNI CRA into his new Allapattah district, where the generation of new Tax Increment Funds (TIF), give him the opportunity to reward friends and screw everyone else.

That what TIF money in the hands of schemers like Sarnoff and Diaz de la Portilla has always been about.

Instead of helping the poor, TIF money becomes nothing other than a slush fund, as evidenced by the Miami-Dade County Grand Jury report that slammed the CRA's operating in the county, and which the Miami Herald wrote about with a photo of Sarnoff and his butt-boy Pieter Bockweg, then the OMNI CRA Executive Director unveiling the state of a dog at Margaret Pace Park. 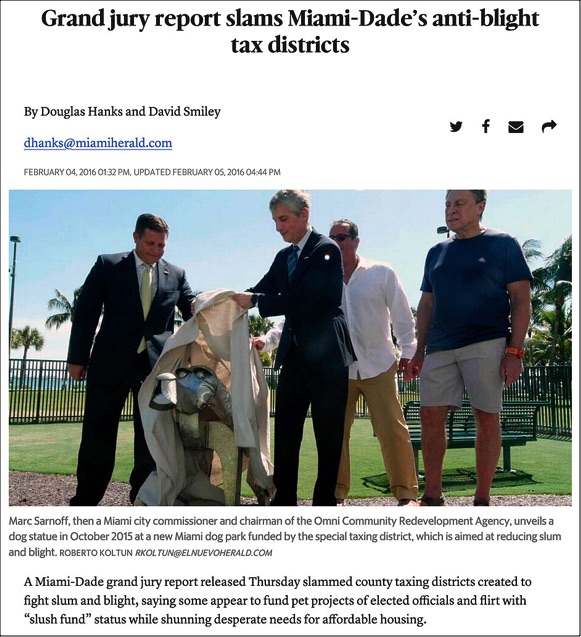 Now that Diaz de la Portilla has installed himself as the Chairman of the OMNI CRA you can bet that it short order it will once again become as corrupt as it was under Sarnoff's chairmanship, where he openly gave away tens of millions of dollars in tax credits to deep pocket campaign donors.

HERE IS THE AGENDA PACKET FOR THE OMNI CRA MEETING