WHICH IS EASIER TO BELIEVE? JEFFREY EPSTEIN WAS SECRETLY TELEPORTED OUT OF JAIL BY ALIENS AND A DUMMY IS WHAT WAS FOUND IN HIS PRISON CELL, OR JOE CAROLLO WAS ONCE A U.S. MARINE?

When it comes to the craziness that defines Miami politics, never bet against aliens and spaceships.

Until last week I had never given a thought of Joe Carollo ever having been in any branch of the military.

The first reason was because I'd never heard him mention military service, and if you've had any dealings with Carollo you'll know he would have never passed up an opportunity to brag about having been a Marine if in fact he had been one.

Not only did he never mention it but you know that if he had been a Marine he would have always worn a fancy windbreaker with USMC in big letters on the back and the Marine Corps emblem on the front, and not that U of M windbreaker that he constantly wears.

The second reason was that last year I was able to have someone with access to sophisticated software generate a background report on Carollo for me, and the report did not reveal any military service as part of his history.

The third, and most important reason was that because Carollo couldn't survive being a glorified school crossing guard - he was a Public Service Officer - with the Miami Police Department, there was no way that he could have survived the 12 weeks of basic training that a Marine recruit goes through.

Carollo is often called "Crazy" Joe, but in fact, it's beyond obvious that he and his brother Frank were both born with some sort of medically identifiable mental condition that accounts for their erratic and often volatile outbursts and behavior; behavior that he can barely control today, and certainly was less able to control when he was younger.

It was therefore a surprise when I started getting "tips" last week from sources that Carollo was not only claiming that he had been a Marine, but that Colonel Klink had given him the above certificate honoring his service.

That really didn't make sense to me, and without going into all the twists and turns and various conversations that I had with a number of folks, I came to believe that Carollo was not only lying when he claimed to have been in the "U.S. Marine Corps Reserves," but that the certificate and the sudden attention on Carollo's military service might actually be a very cunning ploy by Colonel Klink to fuck with Carollo, and to try and do it while keeping his his involvement a secret.

First off, even though I rag on the Klinker, he's a shameless self-promoter and a schemer not an idiot. He not only spent 30 years in the Army, but he spent a lot of that time in the Washington D.C. swamp where stabbing people in the back while jerking them off, and doing both while standing in a park feeding the squirrels is a real art form that makes the tricks that magicians like David Copperfield do look like a kids play.

The way I see it is that according to the Klinker, Carollo had told him last year that he had been in the Marine Reserves, as he recounts in this video clip. 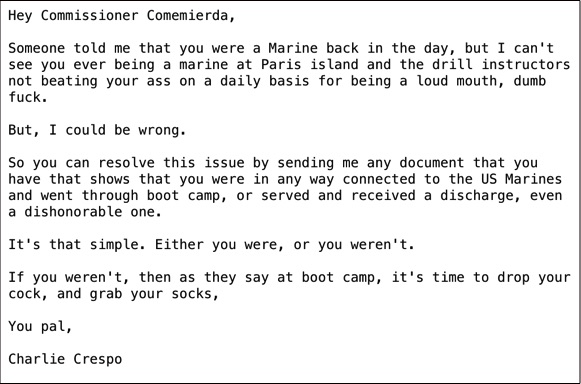 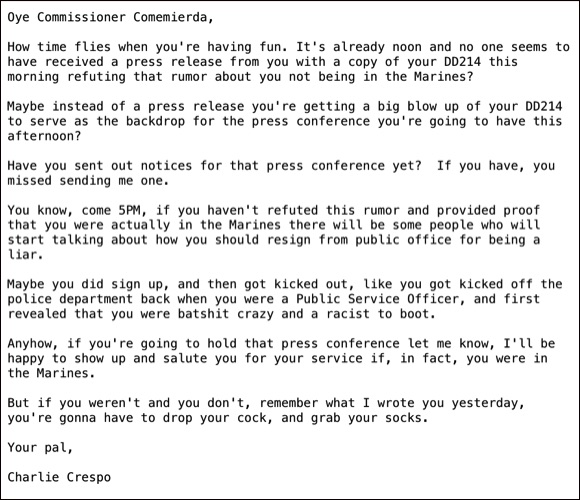 Short of being called a child molestor, calling Carollo out for lying about being in the Marine Corps, was the kind of thing that were it a provable lie, would have had him up at the crack of dawn on Friday morning, calling TV stations and various Cuban radio stations demanding to be let on the air to challenge this demonstrable lie, and calling Joey Flechas at the Miami Herald, along with any and everyone else he could think of to wave his DD2-14, proving that he had been in the Marines, and in the process not only calling me all the names he's called me in the past, but a few new ones to boot before capping it off by telling me to stick his DD2-14 up my ass and rotating on it.

That's what you would expect anyone to do who wasn't lying about being in the U.S. Marines to do, because a real Marine would never put up with being accused of not really being a Marine.

But, he didn't do any of that.

As of today, Carollo has been absolutely and completely silent!

The answer to that question rests with Colonel Klink.

On Monday morning the Klinker has to come clean with what he knows, and when he knew it, because all of this has now been on the street for a couple weeks so he cannot seriously claim with a straight face that he hasn't been asked, or wasn't curious enough to make the phone call that would let him know whether Carollo was ever a U.S. Marine.

And that's just if this was a game being played with unmarked cars, which I don't believe it is, because none of this would have ever become public had it not been for the Klinker's decision to give Carollo the certificate, and no one can reasonably believe that the City Manager of Miami goes around giving out Certificates Of Appreciation to individuals for their military service based on, "what he told me last year."

That just didn't happen,but if it did, then Klinker, I was a prisoner of war in the War On Crime, so give me a certificate?

When dealing with a guy like the Klinker, you really need to pay attention to the words he says because those words are often very important, and you'll notice in the video above that he didn't declaratively state that Carollo had been in the Marine Reserves, but that Carollo had told him that he had.

That's the kind of critical difference that provides the Klinker with an out if the shit hits the fan. It's the old, "Hey don't look at me, I was just going along with what he told me," defense.

What I believe happened is that the Klinker deduced, based on Carollo's behavior during commission meetings, as well as perhaps on other things that Carollo told him over the last year or so that it was unlikely that Carollo could have ever been in the Marines, or the Boy Scouts for that matter, either because of his mental problems, or perhaps because of other comments that revealed that Carollo didn't know anything about what was involved in being a Marine, and the Klinker, being a guy who could with a single phone call to one of his contacts in Washington - he did after all spend a whole week up there recently posting selfies on Twitter with all of his "dear friends" and "former colleagues" - made that call and found out that Carollo had never been a Marine and then set about laying down a mouse trap with the cheese - the cheese in this case the certificate above - for Carollo to swallow.

Then, instead of jumping up and yelling "Got You!" the Klinker, being the devious back room operator that he prides himself on being set about removing his fingerprints from the mouse trap by having a couple of his inner circle start a whispering campaign to get the word out that Carollo had accepted a certificate honoring his service to the country, but that it was a lie because Carollo had never been a Marine.

That's how I got involved. I'm one of the ones who got "tips" from several sources telling me that I should look into Carollo's claim that he had been in the Marine Corps.

The rest was predictable, because I am in my own way just as batshit crazy as every other wack job in Miami, only I'm willing not only open to owning my craziness, but when the possibility of catching Carollo in a lie showed up on my doorstep I became happier than one of those little monkey's in the zoo you see jerking off and grinning at the spectators.

Once my "sources" had fed me the information, and once I had given it some thought and due diligence on Thursday,  I wound up and fired off a couple spitballs at Carollo's head in the form of emails circulated widely and posted on Twitter, because I tend not to be too subtle when I decide to poke somebody in the eye to see what happens.