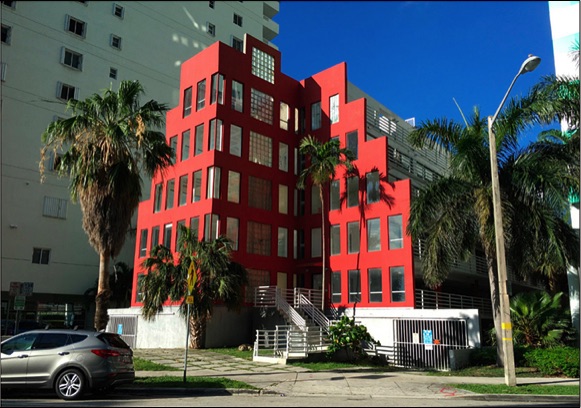 The Babylon Opponents by al_crespo on Scribd

After 10 years of writing this blog, I am firmly convinced that there have been members of the Miami City Commission who have sold their votes for money and other benefits.

Being convinced that this happened and having the kind of documentation that would result in a criminal conviction however are more often than not impossible to prove.

It's hard to prove that these crooks have taken money because the selling of votes by elected officials in South Florida has been going on for so long that only the dumbest ones haven't figured out, or been coached on how to do it in ways that are impossible to discover without serious investigative efforts by law enforcement.

The problem is compounded by a State Attorney and her staff who have demonstrably been willing to provide protection to politicians through what everyone knowledgable about the political culture in South Florida refers to as the Family and Friends Plan.

At the same time, not every campaign contribution constitutes a bribe, even when those contributions come from folks who show up at city hall on a regular basis.

Money is known as the mother's milk of politics, and I know that some will roll their eyes at this, but a lot of times people who give money to politicians actually do it for reasons other than bribery.  Miami still remains a small town in many respects and the folks who populate City Hall often have histories that go back to elementary school, or in the case of many Cubans, they have "cousins" who are related to, or neighbors of folks at City Hall.

In short, there are many reasons to give money to politicians to automatically assume that any particular donation is actually nothing other than a naked bribe to garner a vote one way or another.

The packet of documents below openly alleges that Commissioners Manolo Reyes and Joe Carollo voted to allow the teardown of the Babylon and the up-zoning of the property because they took campaign donations from the law firm of Bercow Radell Fernandez & Lark, and in Carollo's case from the owner of the property as well as the Bercow law firm.Now, I'm not here to defend any of these people, and it's clear that in the last couple years that so many questionable votes have taken place that one cannot dismiss out of hand that any of the current city commissioners could very well be selling their votes for chump change.

What you should keep in mind as you read the information below however, is that just a couple weeks ago I did a story about Eddy Leal, the lawyer that Mayor Francis Suarez hired to be his counsel earlier this year, and whose antics at a recent commission meeting coincided with anonymous allegations involving his activities in trying to stop the Babylon property from being up-zoned.

The packet of allegations below I suspect were probably prepared by him or those opposed to the rezoning.

Politics in Miami is a hardball game and not for the faint of heart or for those squeamish at how political sausage is made. Those opposed to this particular zoning change might be wrong in their allegations, but then again some of what they allege might be right because there have just been too many questionable deals and too many five figure campaign donations to the political action committees of the current gang at Miami City Hall for there not to be valid suspicions that there is shit in the game when it comes to who votes how, and for what. 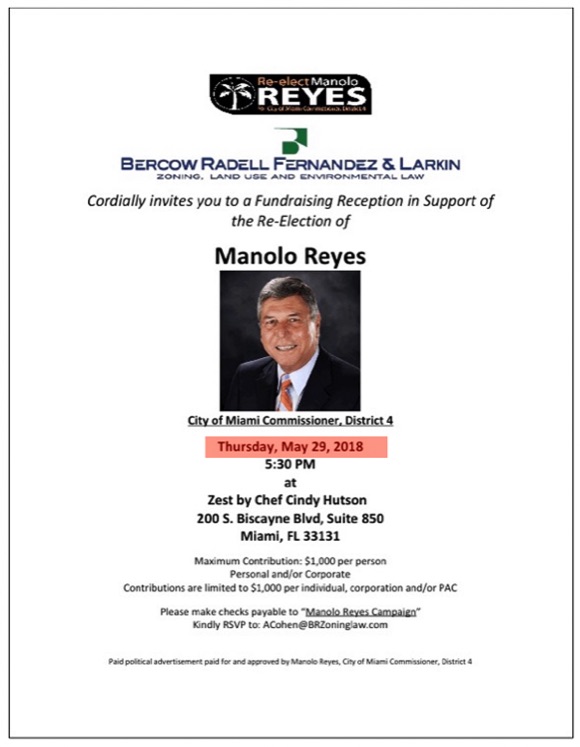 Moving on, shortly after posting my story yesterday about the alleged favoritism shown to the owner of the Babylon property as a result of campaign donations to Commissioners Reyes and Carollo from the law firm of Bercow Radell Fernandez & Lark, a loyal Crespogram reader called to remind me that a year ago I had posted an invite to a fund raiser that the firm had held for Commissioner Reyes.

Having written close to 3000 stories over the last 10 years, I had completely forgotten about the invite, and when I went back and found it, I decided to go and look at Reyes' campaign reports to see how much money he might have received as a result of this fund raiser.

It turns out that the campaign reports show that on May 31st, 2 days after the fund raiser his campaign report shows he received donations totalling $37,600. Most of those donations had been for $1,000.  (You can see the entire list below.)

Now, without having access to the campaign's internal records I can't state with complete assurance that that $37,600 came as a result of the fund raiser, but the usual practice is that it normally takes 2 days after an event for the checks to be deposited and reported.

There is a very big difference in perception if nothing else between a law firm donating a couple thousands dollars, and one raising as much as $37,600 by hosting a fund raiser, when it comes to the kind of support that that law firm's clients might receive at the hands of the city commissioner(s) receiving these kinds of donations.

This still doesn't make Reyes's vote on the Babylon issue into a direct quid pro quo, but it does underscore the growing concern that a lot of people are beginning to express about the amounts of campaign money being given to the Mayor and city commissioners and how the votes they are casting on high-profile, controversial issues reflect that some of these votes appear to be tied one way or another to all of these donations.

It pays to work for the Mayor, especially if you have a zoning issue that you and/or your family might have a financial interest in.

This morning Miami Mayor Francis Suarez vetoed the rezoning of what has become known as the Babylon property in the Brickell area. The property has been a subject of contention since the owner filed to have the property rezoned on the basis of an error that occurred when the city converted from the old Master Zoning Plan 11,000, to what is now known as Miami 21.

I first wrote about this when I posted a story about Eddy Leal, the Mayor's new legal counsel, and the anonymous document that had been circulated  detailing his efforts to try and block the rezoning effort. You can read that story HERE.

Yesterday, I posted a new story, based on a second set of anonymous documents that raised questions about the vote at the last commission meeting that granted the zoning change.

The allegations in the document that I posted yesterday centered on allegations that Bercow Radell Fernandez & Lark, the law firm that represented the property owner had succeeded in getting the zoning change because of campaign donations to Commissioners Reyes and Carollo.

This morning, the Mayor weighed in and vetoed the Commission's vote. I had hoped to provide you with a copy of the Mayor's veto message, but 45 minutes after I was told the message would be sent, it wasn't, so...