PHOTOS OF THE NIGHT - THE THRILL IS GONE

It's been 8 months since Commissioner "Comemierda" Carollo came up with his personal Little Havana Flag and engaged in some gangster maneuvers to take away the Viernes Culturales (Last Friday Of The Month) event from the group that had been doing it for almost 20 years because local Little Havana businessman Bill Fuller wasi involved with the group.

In the beginning, the Friday night event was a big deal because Carollo had done some sort of private deal with the owner of America TeVe, who supposedly footed the bill for the event so that he could then use it as special event programming for his station, but even then there were rumors that some hanky-panky had taken place using money from the Bayfront Park Trust funding of the city's annual New Year's Eve event to cover the talent costs for the performers who entertained at that event and then showed up in Little Havana the following month.

It was evident after the first couple months that the attendance was dropping off, and at the last event held on July 26th, the thrill had gone as  evidenced by both the way the event was being staged, by the lack of TV coverage and by the low turnout.

Unlike previous events this time the musical part had been reduced to the back half of Domino Plaza, and the vendors tents that had previously been set up on the North side of 8th street had now been moved into the Plaza. That's the photo below.

The big question, and it is a big question that unfortunately given the cowardice of Colonel Klink, the deviousness of City Attorney Victoria Mendez, and the suck-ass behavior of the others who would be responsible for actually doing the digging, is how much taxpayer money went into funding this event, and finding out whether the rumors that Carollo stiffed the talent are true? 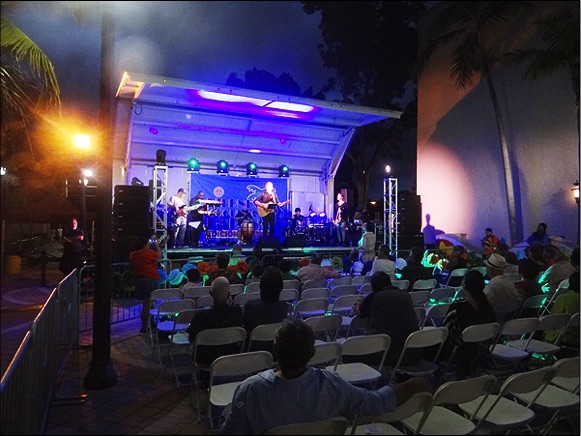 First up is a copy of the ethics complaint filed against Eddy Leal, the Mayor's legal counsel, by Jeffrey Bercow, whose law firm represents the owner of the Babylon property.

I initially wrote about Leal and his alleged activities in July, and I followed up last week with a couple stories about the claims of legalized bribery  through campaign donations given to Commissioners Reyes and Carollo, HERE and HERE.

Below is a copy of the ethics complaint, which was filed the day before Francis Suarez vetoed the decision made by the Commission to grant the Babylon property owner an upzoning of his property.

In anticipation of the lawsuit that will soon be filed over the decision of the Miami City Commission to allow the ULTRA Music Festival to return to Bayfront Park, the below letter was sent to the Mayor detailing the reasons why the groups and individual involved believe he should veto the commission's vote.

That's not going to happen, because while Commissioner Keon Hardemon gets the credit for bringing up the idea of "inviting" the ULTRA people to rethink their decision to move from Miami, the fact is that the guy behind the scenes yanking on all of the levers to try and make this happen was the Mayor., so the last thing he's going to do is veto this deal

Expect to see a lawsuit filed the day after the first commission meeting in September.

MAYBE THIS IS A PUBLIC MEETING, AND MAYBE IT'S NOT. XAVIER SUAREZ IS HAVING A LITTLE GET TOGETHER TO DISCUSS ZONING PROBLEMS IN HIS FELLOW COMMISSIONER EILEEN HIGGINS DISTRICT

Beba Mann has never gotten over loosing the District 3 commission race to Frank Carollo back in the day, and since then she's become a termagent crusader of all things involving her neighborhood, including trying to get the street in front of her house blocked off as a way to stop all traffic other than the cars belonging to her and neighbors from using the street.

The latest dustup seems to involve a 5 story apartment building being built not in City Commission District 3, where Beba lives, but in District 4, on a property zoned for T5, but which has upset some of the neighbors who neither know or paid attention to the zoning regulations when they should have, and are now pissed to discover that some developer has come along to build a legal building in their midst that didn't need any sort of waiver or zoning exemption.

None of this seems to have deterred Xavier Suarez, who as the Twitter message below indicates is all to happy to jump in, and it is telling that Suarez reveals that the meeting will be convened by Beba Mann from list of folks that she has control over?

You would think that Xavier has enough to worry about in dealing with all of the problems in his district without spending time on an issue that is exclusively a City of Miami issue, and if it were a county issue, would be one in Eileen Higgins district.

But that's Xavier for you. When he's not taking money from some alleged 'coke-partying' corrupt building official from New York, he's sticking his nose in somebody else's problem to stir the pot in the hopes that it will garner him a few votes next year. 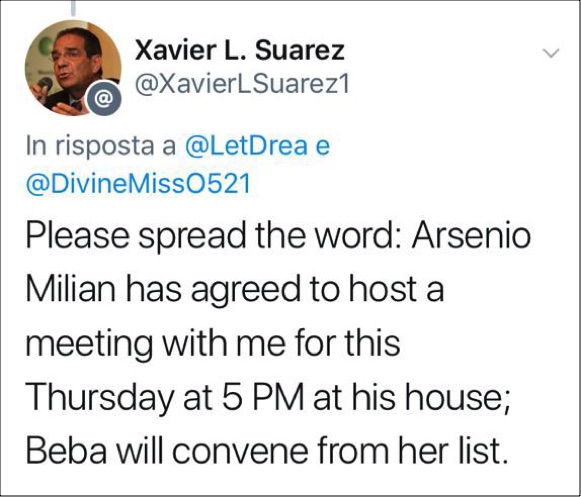