A CRESPOGRAM QUIZ
Tomorrow is the first commission meeting with Alex Diaz de la Portilla on the dais. Who do you think he will stab in the back fIrst?

IGNORING THE LAW TO AVOID THE WRATH OF COMMISSIONER "COMEMIERDA" WILL  NOT END WELL FOR CHRISTOPHER ROSE, THE CITY'S  BUDGET DIRECTOR

Tomorrow, the ordinance that will give pensions to the Mayor and City Commissioners comes up for a 2nd vote.

It may, or may not be voted on, or it may be deferred.

It's all up to Commissioner "Comemierda."

At November's meeting Carollo stated that he was not ready to vote on the item because he wanted more information on the impact that these pensions will have on the city's budget.

That was bullshit. Carollo cares not one whit about the impact of the pensions on the budget. What he cares about is that his ex-wife not get another penny of his pension.

Here is a link to the 3rd DCA opinion on the appeal that Carollo filed in Joseph CAROLLO, Appellant, v. Maria Ledon CAROLLO, Appellee, over her claim that she was entitled to half of his pension for life.

After last month's meeting, I sent Rose an email requesting all the correspondence between him and Carollo.

Last week, after Rose has refused to comply with my request I sent him another email.

Both of those emails are below. 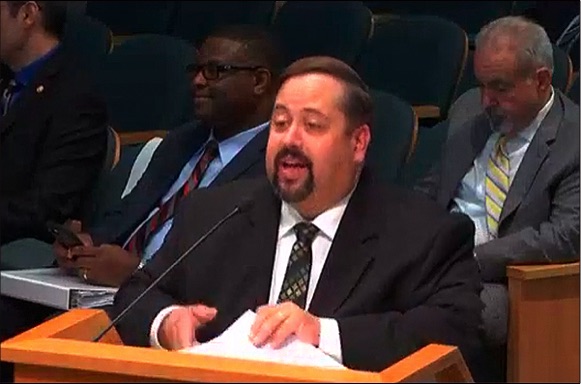 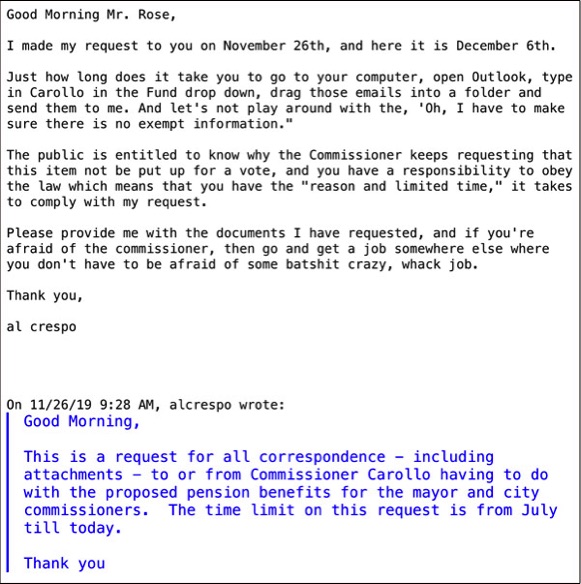 Rose has a justifiable reason to have some fear of Carollo, because Emilio "Colonel Klink" Gonzalez, the City Manager has for the last two years shown a lack of character and courage needed to stand up to Carollo on any number of issues, including defending his employees against Carollo verbal bullying.

As Frank Rollason, who had a long and honorable career as a senior executive in the city once opined, "If you're afraid of getting fired, you should never take the job of City Manager." Today, with the collection of gangsters and schemers at the top of the so-called Suarez administration, that goes for any senior executive position in the city who fears not only for their job, but their reputation.

The problem facing Rose now is not a lawsuit for failing to respond to any of my public record requests, but what is going to happen in the next few months as Carollo and his new sidekick Alex Diaz de la Portilla start working behind the scenes as they start looting the city budget to fund their personal projects.

Carollo and Diaz de la Portilla are as serious as cancer when it comes to looting the city and once they send Gonzalez on his way, the next City Manager will be "their" city manager, and then the budget guy is going to find himself between a rock and a hard place.

That's when the fun is really going to start.