VICTORIA MENDEZ, WHO DECLARED THAT SHE HAD NO PROBLEM WITH THE CITY COMMISSION ENGAGING IN ILLEGAL BEHAVIOR IF NO ONE OBJECTED, IS ALSO RESPONSIBLE FOR THE OFTEN ILLEGAL AND ARROGANT BEHAVIOR OF HER OFFICE IN RESPONDING TO PUBLIC RECORD REQUESTS, ALL OF WHICH MADE HER A NATURAL TO SHOW UP TO TALK ABOUT PUBLIC RECORDS AND ETHICS

The first story was about the failure of the Budget Director Christopher Rose to provide me with documents I had requested related to Commissioner "Comemierda" Carollo's stated concerns over the proposed pension plan for elected officials, and a request to Commissioner "Sellout" Russell asking for copies of all the complaints that his office had received about the electric scooters operating on the city streets.

What happened afterwards reveals just how fucked up the response to public records in Miami has become, and how that last person in all of Miami who should be given any sort of platform to speak about public records is Victoria Mendez.

Here is what happened with copies of the actual emails.

At the November 21st commission meeting Commissioner Carollo stated he did not want to vote on the item SR-3, which dealt with the reinstatement of pensions for  elected officials.

His reason was that he had made a number of requests for information, none of which had been responded to and then he waved around a copy of the list of elected officials who were, or would collect pensions that stated that that document contained a mistake.

Here is the video and what he said:

On December 11th, after I had posted my story, Rose sent the following email to Victoria Mendez and Jihan Soliman, the Assistant City Attorney' in charge of the Public Record's Division.

Later on the afternoon of  December 11th, I received this email from  Jihan Soliman, the Assistant City Attorney' in charge of the Public Record's Division.

I opened the attachments with some anticipation, expecting that her claim that it had taken them time to review the documents Rose had provided  might be something special.

It was not. In fact the only documents that she sent me was an email that I've osted below, and a copy of the list of elected official who receive pensions, that Carollo waved around in the above tape.

First, you'll notice that the email below was sent to Carollo's staff member Jay Rhodes, Assistant City Manager - and the REAL CITY MANAGER - Joe Napoli, and the Chief Financial Officer was sent the day after I made my public record request.

Secondly, you'll notice that I have highlighted the claim that the information provided was, "without the note."

Since my original request stated that I wanted , all correspondence - including attachment," this supports a claim that my request was not properly fulfilled, because that note was not included in the response, and in fact, I haven't a clue as to what "note" is being referenced.

Lastly, and more importantly, at the bottom of the page I have highlighted the attachment.  This is supposedly the "document" that according to Soliman, took so long to review for exemptions.

It took me a moment to realize where I had seen that attachment before. I had seen and copied it from the report that I got from the company that had been contracted to do the study on pensions for the city, and which I had included in a story I did about all of this on September 10th.

The only difference between that version and the one below was that the pension numbers for Carollo had been changed from $1,320/$8392 to the numbers below of $7159/$8392.

So, if Soliman is to be believed, the failure to provide me the documents I had requested - which I still have not received - and the attachment below was based on the time consuming effort it took to make sure that the attachment contained no exemptions - which means shit I'm not supposed to see.

The only problem is that that would mean the "note" and that was never forwarded to anyone. 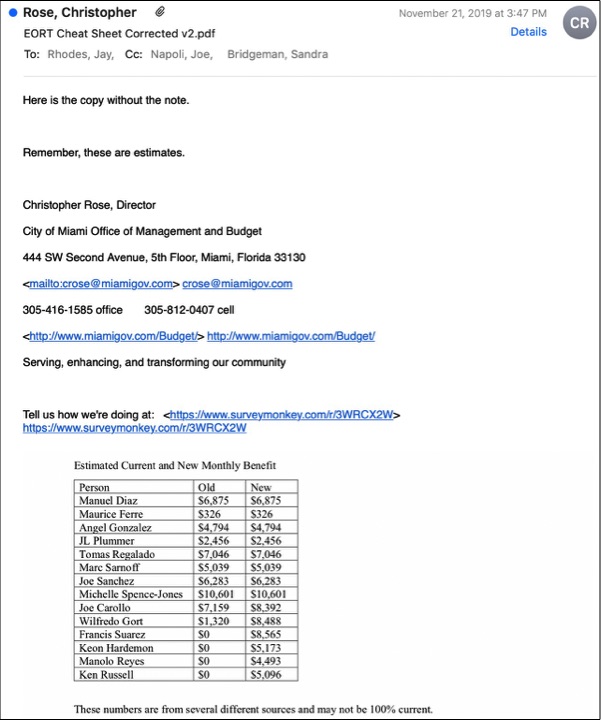 In short, Budget Director Christopher Rose, not only failed to comply with my public record request, but also missing from Rose's response were any of the correspondence and/or requests that Carollo himself had made to Rose, and which were covered as part of my request.

This points to an even bigger problem that involves the claim that commissioners - and most especially Commissioner Reyes - has had to resort to filing public record requests to obtain public documents he's requested from the administration that they have refused to provide him.

I've said it more than once, and I will continue to say it that if you've got a Budget Director who is playing fast and loose with providing public records on simple shit that should by rights be turned over within hours and not days, weeks or months after they've been requested, and then only on a threat of a lawsuit, then you've got a real problem on your hands because this means that the documents he's refusing to release are ones that will embarrass someone or reveal financial information that someone doesn't want made public.

At that point all bests are off as to how much you can trust the Budget Director not to cook the books on the orders of one politician or another.

We now go on to my second public record request:

The electric scooters that Commissioner "Sellout" Russell is so enamored of, continue to be a problem for many resident sin his district.  I shot this video last Friday morning after I had left the DDA meeting.

Because I have written a number of stories about electric scooters since they first showed up illegally on city streets, and because folks call me to complain about their encounters with them, after I learned that Russell's office was receiving a steady flow of complaints, I submitted a public record request for copies of those complaints on November 15th to Russell personally.

On December 12th, after having sent Russell and the City a 5 day Notice that is required before going to court because Russell had refused to provide me with copies of the complaints, I received this message from Ms. Jihan Soliman.

And so the back and forth began.

Here is my first response.

Here is her reply.

Which prompts my response.

Which triggered this reply. 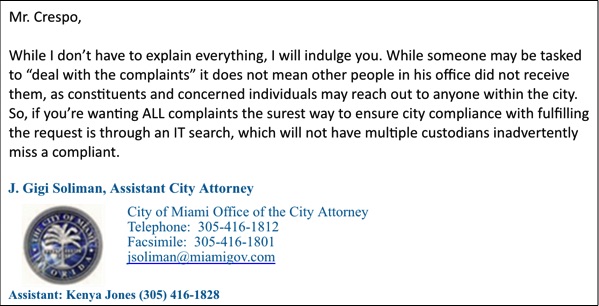 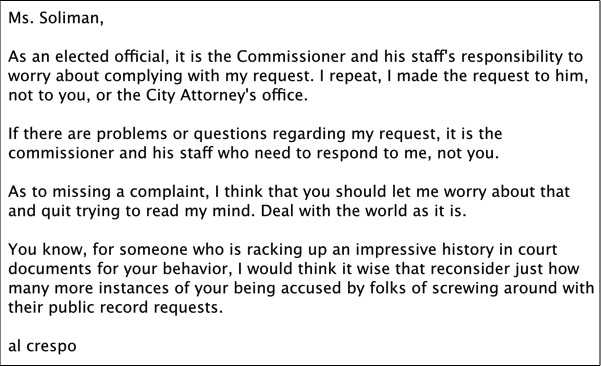 And then I sent this reply.

Which led to this reply.

Thus has all be a circle-jerk.

The truth of the matter is that Russell's office, for obvious reasons has not wanted to reveal the number or kinds of complaints that residents in District 2 have been making to his office about these scooters, and Jihan Soliman, through this nonsense has been providing him cover with her nonsensical arguments.

On October 30, 2013, I posted a story addressed to the city employees of Miami and included a copy of a letter that I had written to  Victoria Mendez about the requirements of Florida Public Records Law, and I included a link to the Florida Sunshine manual.

While the city has every right to establish internal procedures for tracking public records, they DO NOT have a right to supercede the provisions of Florida Statute or case law when in comes to complying with Chapter 119.

What this means is that Florida law sets the guidelines who who, and how public record requests are to be complied with:

“Every person who has custody of a public record shall

permit the record to be inspected and copied by any

person desiring to do so, at any reasonable time, under

reasonable conditions, and under supervision of the

custodian of the public records.”

Secondly, In Puls v City of Port St Lucie, 678 So 2nd 514 (Fla 4th DCA 1996): “…the courts have concluded that the statutory reference to the records custodian does not alter the “duty of disclosure” imposed by s. 119.07(1) F.S., upon “[e]very person who has custody of a public record. Thus, the term “custodian” for purposes of the Public Records Act refers to all agency personnel who have it within their power to release or communicate public records.””

What this means in layman's terms is that anyone, for any reason, without having to identify themselves, or provide a reason for why they are making a request of any document, walk into the office of a public official or public agency, send an email, or make a phone call requesting a public record, as long as the person making the request makes it with enough specificity so that the custodian understands what document(s) are being requested.

Then, the custodian has the "reasonable and limited" amount of time to retrive the document, make sure it doesn't contain any "exempt" information such as social security numbers, bank account numbers, information regarding legal strategy if the document has to do with a lawsuit against the city and/or internal police procedures and blacken those items out, and turn the documents over to the requester for 15 cents a page.

If, as I did, make a specific request of an elected official to provide me with documents that I have clearly identified, someone like Jihan Soliman, not matter her title or job description has a right, or the authority to change, enlarge or alter my request by claiming that upon her own action she has decided to enlarge my request by seeking similar documents from other custodians of documents in the city.

MY REQUEST FOR THE CAROLLO PENSION DOCUMENTS

On November 26th, after looking at the video of the meeting again, and realizing that Carollo had claimed that he had requested a lot of information I sent Budget Director Christopher Rose the following email. You will notice that my email states "all correspondence - including attachments...to and from," going back to July 1st: