WHY IS THIS CITY PARK CLOSED WHEN IT SHOULD BE OPEN?

Trust this finds you well. Thank you for looking into the unfortunate event of the Sterns involving some members of the community and the park hanger Raymond Byrd. Understanding you have actively involved in the matter I would like to inform you that so far I haven't received any answer or feedback regarding the complaining. Sterns Park is still part of Park Ranger route. The only new thing we have been experiencing since the incident on Dec 6th 2019 @ 6:00pm  is the closure of Sterns Park in many different occasions starting on the week after the incident on 12.6.19. Sterns Park has been locked at 6PM everyday since even though the city sign states 8PM. Sunday Dec 15.2019 Sterns Park wasn't opened until almost 8am.

Parks are vital for the well-being of the residents and promote the sense of community. We have Albert Pallot Park that has been closed for 2 years now (which makes us all quite upset) and now Sterns Park is lock and we do not really know why. I have been going to that Sterns Park at least since Albert Park was closed off completely and never had an issue. Leaves me wondering why this suddenly decision to lock the park at 6pm when it has been stated 8pm for months now.

For your convenience please see pictures attached. There were 5 of us (residents) at the park at the evening of the incident and many others(residents) are looking forward to hear from you soon.

ORIGINALLY THE FERRIS WHEEL OWNERS WANTED THEIR WHEEL UP AND SPINNING BY CHRISTMAS IN ORDER TO MAKE SURE IT WAS READY FOR SUPERBOWL WEEK. NOW THE ODDS ARE NONE OF THAT IS GOING TO HAPPEN 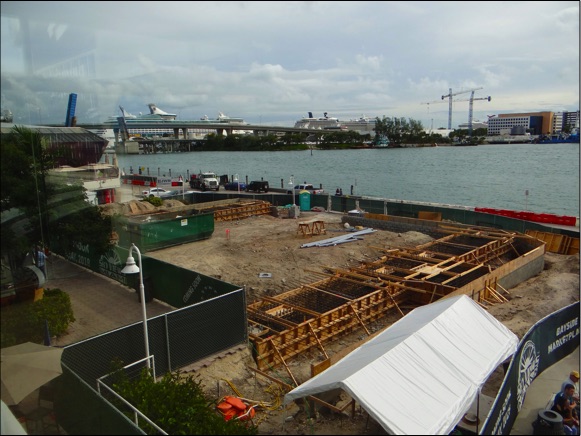 I took this photo of the construction site for the base of the Ferris Wheel at Bayside last Friday.  As of today there are 45 days to the Superbowl.

The owners of the Ferris Wheel originally planned to have their wheel up in plenty of time to take advantage of the crowds that are coming to Miami for the week of events that make up a big part of why the event has become such a big event.

Given the lack of progress on the foundation base none of that now seems possible.

The big question is how this this happen?

First came the efforts of Joe Carollo to do his best to throw a monkey wrench into the deal between the Ferris Wheel owners and Bayside so that the owners of the wheel would be forced - or so he hoped - to move the location of the wheel from the Bayside property to Bayfront Park, so that the Bayfront Park Management Trust could make all the money that Bayside is going to get, and then he, as the Chairman of the Trust, could have that money to spend.

That scheme went out the window when the owners of the Ferris Wheel sued Carollo, in the process revealing that they had hired him in 2016 for  $125,000, to find them location options for where the Ferris Wheel could go. See a copy of their lawsuit HERE.

In spite of the lawsuit, or perhaps because of it, at the October 24th commission meeting, the other commissioners agreed to finalize the deal between the city and Bayside allowing the Ferris Wheel to be placed on their property.

Below is a copy of the video of the commission meeting where the RE and PZ items on the Ferris Wheel discussed and approved, with a no vote by Commissioner Carollo.

Several interesting points in this video are worth paying special attention to.

First, Carollo stated that several days before the commission meeting he saw construction taking place for base of the Ferris Wheel on Bayside property.

That means that on, or about October 22nd, the - the date of the Bayfront Park Management Trust meeting held at their headquarters next door from Bayside, the foundation work above had already started.

This in turn raises a question of why almost two months later this foundation work and the pouring of the concrete base has not been completed?

Why is something that would seem so straightforward taking so long.

Secondly, at minute 8:58 of the video, you can watch and listen to City Attorney Victoria Mendez interject herself into the conversation between the commissioners to claim a "Point Of Privilege," to criticize the owners of the Ferris Wheel for filing a lawsuit against Commissioner Carollo.

How, other than in a Banana Republic kleptocracy is that kind of behavior by a city attorney allowed to go unchallenged?

To hear a lawyer, especially a City Attorney whose salary is paid for by the taxpayers to opine on the rights of a private company to legally seek redress against a former employee who is now a city commissioner and who failed out of a basic sense of fairness and transparency something he keeps demanding of others - much less a potential conflcit of interest to disclose his previous employment by this company is just one more indication of just how fucked up the City of Miami really is.

But, it's worse than just listening to Mendez opine on an issue that she has no business opining on, it's also that the decision by the city commission instructed her to prepare and sign off on Amendment #5 of the lease between Bayside and the City, incorporating all the changes mandated by the commission to legalize the placement of the Ferris Wheel on the Bayside property.

According to sources, that lease amendment has still not been finalized, which raises the question of how critical is the finalization of that lease agreement to the construction of the Ferris Wheel?

After learning that the lease agreement was still pending, I sent Victoria Mendez the following email. 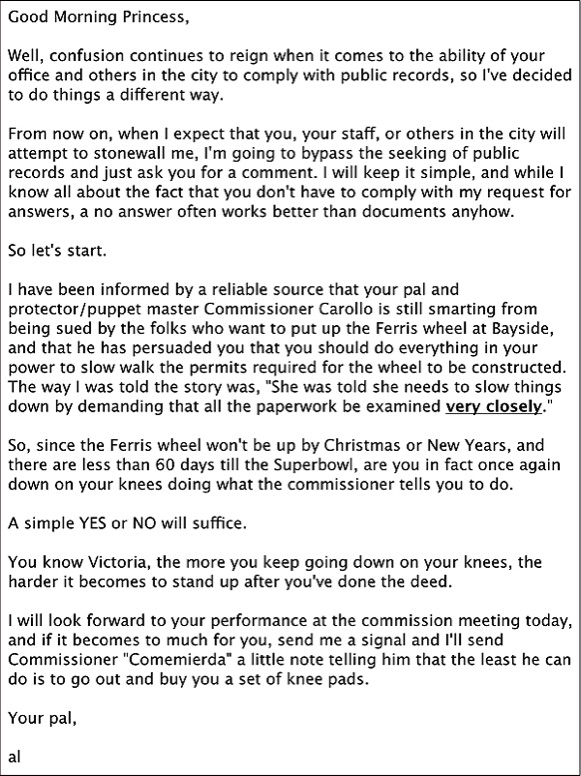 Here was her response.

While fiesty in her response, the fact of the matter is that there is more than ample documented evidence that Victoria Mendez has not only gone out of her way to treat Joe Carollo and his various causes with kid gloves, and she has yet to provide an answer as to why Amendment #5 to the Bayside lease has yet to be finalized.

HERE IS THE PORTION OF THE OCTOBER 24TH CITY COMMISSION MEETING DEALING WITH THE FERRIS WHEEL.