THE CAROLLOS HAVE LEFT THE COUNTRY

Looks like Commissioner "Comemierda" and his wife, "Left Turn" Margie, have decided that instead of going to Venezuela for the holidays as a show of solidarity with Juan Guaidó and his wife who they kept chasing after every time they showed up in Miami so that they could get included in the photo-ops, have instead decamped to Paris for a little site seeing.

It was a rough year for the Carollos, not withstanding their success - political and financial - in supporting Alex Diaz de la Portilla for City Commissioner, who it seems is another world traveler who it is rumored also couldn't wait to get on a jet plane and get out of the country after last week's commission debacle.

Carollo who has no visible means of support other than his commission salary, left behind an unpaid fine for the tree he illegally cut down at his house at 3230 Morris Lane, as well as 4 other code violations that he has yet to address, including tearing down the illegally constructed carport, which the construction company that's supposed to be bringing the property up to code applied for the following Wavier in September.

Nothing seems to move very fast for Commissioner Comemierda" when it comes to the city enforcing their laws, and as week's commission meeting revealed, Carollo's mouth might still work, but his long dreaded pistol of vengeance no longer seems to shoot bullets, which is a problem because...

I hear that Colonel Klink did not take kindly to Carollo's botched efforts too get him fired at the last commission meeting and is now working to have a guillotine built in downtown Miami for his own January surprise. 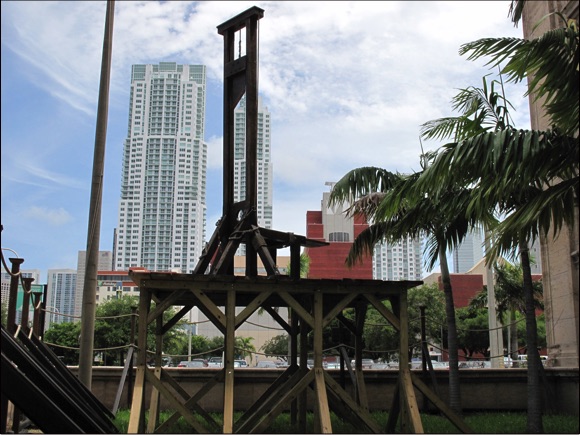 If "Comemierda"and "Left Turn" Margie took along a suitcase full of Key's To The City, like Regalado and his wife used to do when they traveled, now might be the time for them to start handing them out and see if they can bullshit their way into getting some European version of a Miami crooked politician and grant them asylum, because when it comes to a gunfight between Carollo and The Klinker, you got to figure that having seen the best that Carollo could throw at him, The Klinker, after being in the army for 30 tears should at least know how to make sure that his gun has bullets in it before he comes out for the gunfight, and that the vbladec on the guillotine is sharp.

It's Christmas time in Miami, Bitches!