Even if only vaguely, most voters are aware of the influence that public employees unions have in municipal elections.

In Miami, like other cities, public employee unions provide members to knock on doors, drive voters to the polls, and even donate serious money to campaigns.

Last month's election for a new District 1 City Commissioner prompted allegations that a City of Miami police officer was illegally using his position to escort Alex Diaz de la Portilla and some of his workers into a public housing building that they had been denied access to, and that members of the fire department were not only driving old folks to the polls, but were going in and marking the ballots as votes for Diaz de la Portilla.

None of these allegations were substantiated as being criminal activity, but every two years, these kinds of allegations and worse become part of the lore of every city commission and mayor's election.

Lost in all of this is that the real impact that labor unions have on municipal government as a result of their support of candidates, is that the politicians repay their support by making sure that the unions get pretty much what they want when it comes to pay and pension increases.

There are no better examples of Quid Pro Quo's, than the reciprocal deals between politicians and municipal employee unions, and those at the top of the food chain are the firefighters who since 9/11 have demonstrated that when they're not cooking up some fancy meal at the fire house or posing for pictures for a calendar, have been busy making sure that they continue to hold on to the position at the top of the food chain.

That notion prompted me to do a little research to see how the police and fire union had been making out on the salary front in the city, and sure enough the firefighters are clearly ahead of everyone else when it comes to pay and benefits.

I did notice however, that there were other examples of folks who since Francis Suarez got elected have received sizable salary bumps, including to no one's surprise all of the Sgt-At Arms.

Understand too, that the numbers below only represent base salary. Many of these folks also qualify for overtime pay, and when it comes to the cops and firefighters they also have the opportunity for off-duty work that can result in a lot more money.

Instead of spoiling the fun, I've included the breakdown of Fire and Police Department first, followed by the December 2017 and the December 2019 list of all the employees so that you can do your own search and shout out to the annoyance or laughter of your fellow workers, 'No Shit! He/she is getting paid that much!'

One last thing you should remember when looking at these salaries is that  according to the US Census Bureau, the median income for the City of Miami on July 1, 2018, was $33,999.

Fire Department by al_crespo on Scribd

Employee Roster as of 1Dec2017 by al_crespo on Scribd

City Employee Roster as of Dec 2019 by al_crespo on Scribd 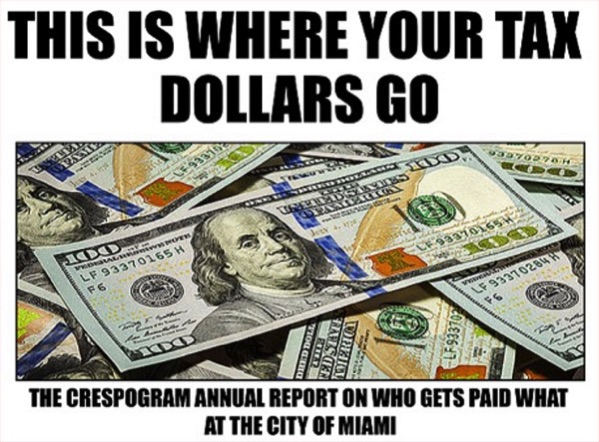 PHOTO OF THE DAY: IS THIS A PHOTO OF LAMBCHOP AND THE 3 WOLVES, THE 4 AMIGOS, OR THE LEADERS OF AN ORGANIZED CRIME FAMILY - THE TRUTH IS IN THE EYE OF THE BEHOLDER, AND/OR THE VICTIMS OF THE CRIME