IT DOESN'T TAKE A ROCKET SCIENTIST TO FIGURE OUT THAT MIAMI IS A CITY THAT IS DYSFUNCTIONAL ON PURPOSE, AND IF YOU UNDERSTAND THAT, A LOT OF MONEY CAN BE MADE, ESPECIALLY IF THE LOCAL PARTY PAPER PROCLAIMS YOU THE MAYOR AND YOU'VE GOT SOCK PUPPETS INSIDE CITY GOVERNMENT HELPING YOU OUT

At the top of the list of folks who have been the subject of the most complaints over noise, code enforcement, and providing support for businesses that have been accused of being operated through the misuse of, or non-existent Temporary Use Permits (TUP) is billionaire Moishe Mana, his employees and business partners including Tony Albelo and his partners, who own SWARM, the event production company that produces almost all of the major and minor special events in Wynwood.

Tony Albelo in less than 5 years has become the 800 pound gorilla in Wynwood, and when Tony speaks, everyone is expected to listen and agree with him. One of the people who hasn't always done so is Miami Police Commander Dan Kerr.

Kerr is the commander of the Wynwood District and his actions in trying to insure that city's ordinances are equally and fairly complied with has made him unpopular not only with the bar and club owners, but also with some of his superiors in the police department, a point that was made clear to me in unsolicited comments about Kerr's activities by Assistant Chief Manny Morales during a conversation I had with him on an unrelated matter.

In full disclosure, I have known Commander Kerr for as long as I've written this blog because he happens to be a neighbor of mine in Miami Shores where over the years we've frequently shared concerns and opinions about what goes on in our little Village.

I was not aware however, until I started obtaining documents complying with my public record requests from the Wynwood BID about how unpopular Kerr had become among this group who had decided to challenge the direction originally agreed upon by the original entrepenuaers and business people who were instrumental in seeing a future for the Wynwood District.

Mana, Albelo and the bar and club owners last year decided create their own group in part to track the activities of code enforcement and the police, and especially Kerr

The initial meeting that led to this decision took place in Mana's office, and following that meeting in May of 2019, Albelo created the WYNWOOD ENTERTAINMENT BOARD ALERT GROUP, using a secure end-to-end Whatsapp group chat for the members to use as an early warning system.

Albelo's company, SWARM, promotes itself as a full-service company that provides various services to bar and club owners and last year they declared on their website that they produced, "100+ events with over 2 Million event-goers.," including a number of events that many folks in Miami would have heard about or even attended. 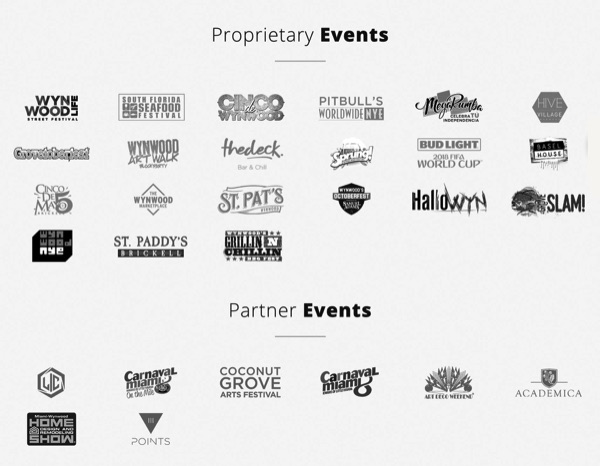 In order to produce the majority of these events, especially those in Wynwood, SWARM had to acquire Special Events Permits from the city.

The person in charge of issuing those permits is Vincent Betancourt, who I introduced to readers in Part I of this series as someone who over the years has gained a reputation as a guy with a side hustle that involved offering his services as a fixer to business owners who might need some special guidance or intervention in dealing with the city.

Betancourt is a hometown boy, who has a history with some city officials going back to when they were in kindergarten together, which is one reason why I believe he has lasted so long in spite of the numerous and documented complaints about how he issues permits.

Among the thousands of pages of documents obtained through public record requests from the Wynwood BID - so many documents that it took me over 2 weeksof reading just to get a basic understanding of what was in them - I discovered numerous examples of complaints involving SWARM behavior and Betancourt's abdicating his responsibilities by continuing to issue Special Event Permits to SWARM after being made aware of previous incidents of misbehavior.

The dispute over SWARM'S use of the 2700 NW 2nd Avenue property to stage these events continued for several more months during which time it was discovered that among their many infractions, SWARM was boot-legging power illegally by running electric cords from another building.

One incident among several that really exposed how how Albelo and SWARM with the assistance of Betancourt operated was an email sent to Betancourt by Commander Kerr, who on July 15, 2019, wrote about how several of his officers came upon a crowd of over 2000 people trying to get into an event that had been issued a Special Event Permit to host a soccer watch party for 550 people.

The applicant for the permit was SWARM, and the the event was not a soccer party but WynCrib, a bi-monthly party that at that time was hosted at a event space known as GRO WYNWOOD, aka PATAGOINA. 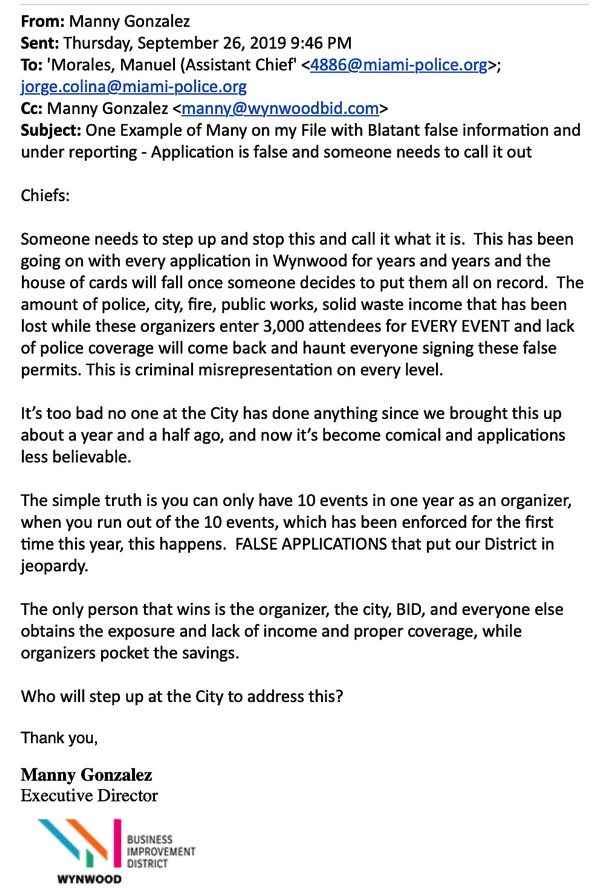 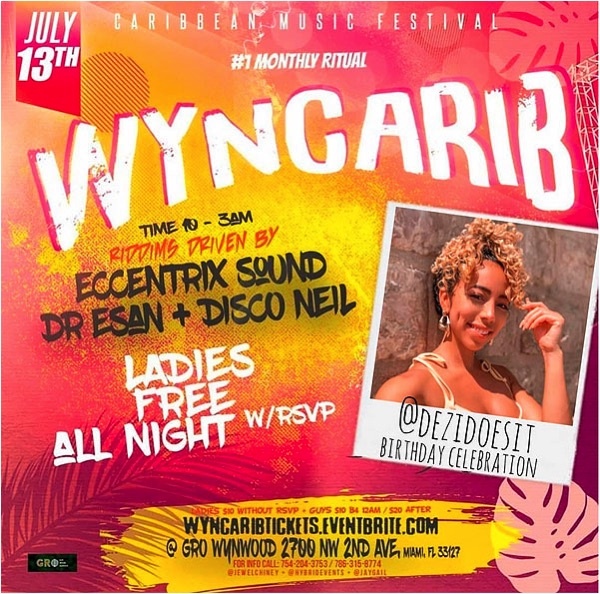 In addition to the number of attendees being off by several thousand people, the  permit Betancourt issued claimed that the event would be "free" to the public. That too turned out to be untrue.

In the last paragraph that I highlighted, Kerr raised the very relevant question about another and more vexing problem that was occurring not only in Wynwood, but in other parts of the city involving what are called Temporary Use Permits (TUP) on vacant land.

Temporary Use Permits are an elephant in the room that just about everyone knows is there, but no one wants to talk about because the applicants for these permits are often deep pocket doners to the Mayor and Commission campaigns.

Another, and more signifiant problem involving TUP's and why these vacant pieces of property become problems is that some of the properties - such as the recent Stripper Bowl on the vacant lot on NE 17th Street and 2nd Avenue next to the historic Miami Cemetery - never applied or were approved for a TUP, and some, after receiving approval, turn around and engage in activities that violate the conditions of the permit.

The lack of a TUP had been a major point of contention when it came to the property being used by Albelo for GRO WYNWOOD/PATAGONIA.

It was an issue that Albelo ignored when he wrote to Manny Gonzalez and Albert Garcia, the President of the Wynwood BID apologizing for not being in touch with them until after he had erected the structures on the 2700 NW 2nd Avenue property by using a Special Event Permit issued by Betancourt. 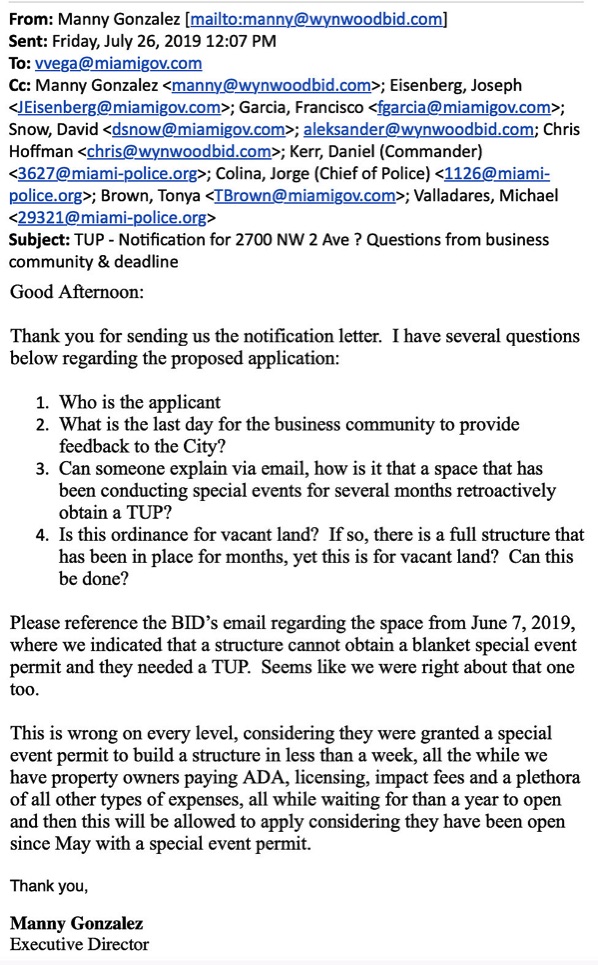 When someone feels the need to include a sentence that states, "The neighbors need not be alarmed," the chances are that in fact, they do!

Before ever opening for business, the property should have applied and received a Temporary Use Permit (TUP), but it wasn't  and it was this lack of a TUP that Kerr referenced in his July 15th email.

Unbeknownst to him however, an application for a TUP had been submitted on July 9th.

That information only became known when on July 26th, the BID received a copy of the notice for the TUP application.

The receipt of this notice prompted Manny Gonzalez, the Executive Director of the BID to send the following email later that day.

The property owner finally decided that he had had enough, and forced Albelo and SWARM shut GRO WYNWOOD/PATAGONIA down and to vacate his property.

This was not the end of Patagonia, and we will revisit what's happened since they vacated the property at 2700 NW 2nd Avenue in another part of this series, but first let's continue down the road a little bit longer with Mr. Albelo and his activities as an event promoter.

The practice of Vincent Betancourt providing SWARM with Special Event Permits that included bogus and misleading information reached a point where BID Executive Director Manny, concerned  about possible incidents that could result in unintended and embarrassing, if not calamitous events for the city caused him to prepare a Power Point presentation for Miami Police Assistant Police Chief Manny Morales, along with Police Chief Jorge Colina that showed how the permit for the 2019 Hallowyn Event was created.

While normally the memo would have been addressed to the Chief and the Assistant Chief, Morales had made it a point to let everyone know that he was opposed to any activities by Kerr or his officers that went beyond, "crime fighting."

Here is the Power Point presentation. 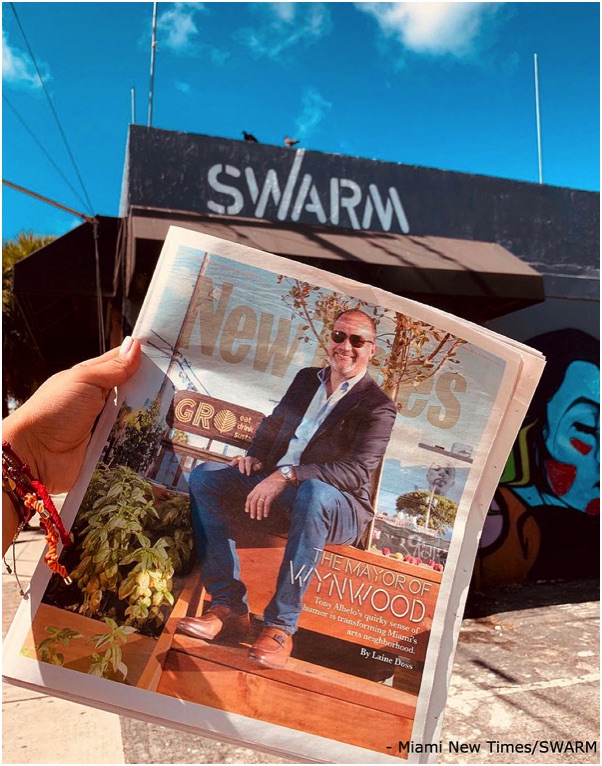 Gonzalez's letter had no affect on the continued illegal use of the property until it was discovered the following month that on top of everything else, Albelo's operation was bootlegging electricity illegally from another building using power cords.

THIS CONCLUDES PART II OF THIS MULTI-PART SERIES.

In an act of understatement, Kerr's email also claimed that, "the event organizer, which changes with every application, is not being truthful in their applications."

I have not found any records that indicate that either the Chief or the Assistant Chief responded to this email and Power Point presentation.

Here is the list of questions that I sent to Albelo. He never responded. 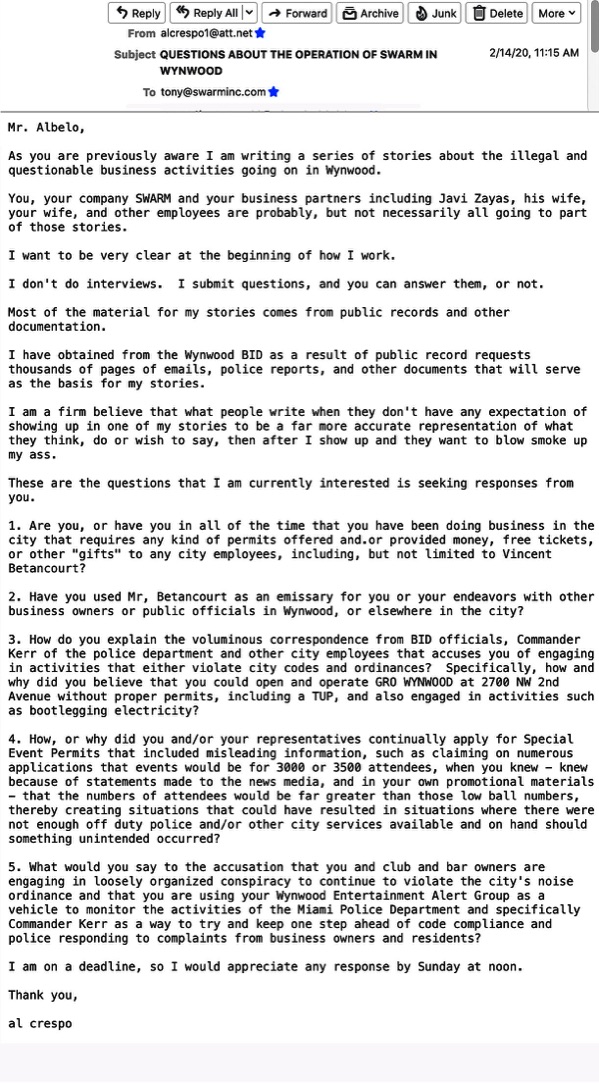