PHOTO OF THE DAY: IT'S A FAMILY THING

In the 11 years that I've been watching and writing about the goings on at Miami City Hall, the only member of the Diaz de la Portilla family that I ever saw show up was older brother Miguel, who had several clients who he represented as a lawyer/lobbyist.

Never saw Alex, and never saw little brother Renier, but at last Friday's Special Commission meeting there was Renier soaking in all the discussion on the Affordable Housing Plan.

Either Renier is unemployed, and having nothing better to do decided to go to watch Alex do his stuff, or Renier was there because he's considering getting into the affordable housing game, or perhaps even the lawyer/lobbyist game.

In Miami having a family member on the city commission can be a very lucrative thing as Commissioner Hardemon can attest from all of the members of his family that seem to cash in on his being on the commission.

I'm sure that if Renier decides to become a fixture at City Hall - even if he slips in and out of the side door of Alex's office - he'll start declaring his clients if he decides to do some lobbying because brother Alex is going to have enough explaining to do about his activities without having to explain what Renier is up to. 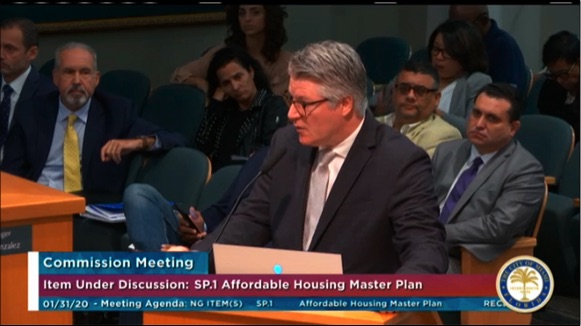 WHEN IT COMES TO RACISM AND ETHNIC PREJUDICE IT DOESN'T TAKE LONG TO GO FROM BEING HATED TO BEING A HATER.  COMMISSIONER JOE "COMEMIERDA" CAROLLO CLAIMS HE CAN SPOT FOLKS WHO AREN'T FROM MIAMI JUST BY LOOKING AT THEIR FACES. THERE WAS A TIME WHEN OTHER MIAMIANS PROBABLY SAID THE SAME THING ABOUT HIM AND HIS FELLOW CUBAN EXILES WHO SHOWED UP UNINVITED IN MIAMI, BUT LIKE IT OR NOT, THAT'S THE WAY CITIES CHANGE AND GROW, AND THIS YEAR' UNWANTED EXILE CAN BE NEXT YEAR'S POSTER BOY OR GIRL REPRESENTING WHAT'S GOOD ABOUT MIAMI

I'm not going to get into a long-winded rant over Joe Carollo's latest foot-in-mouth comments about being able to spot - by looking at their faces - the people who were at the last commission meeting who weren't from Miami, or his comments about his desire not to do anything to change the demographics of Miami, because I don't think it takes too much brain power to realize that both of those comments were stupid and reflected Carollo's efforts to pander to his base in the wake of a Recall effort that began this morning.

Politicians do and say stupid things all the time, and Carollo has a long history of doing both.

There are probably a lot of people, who behind closed doors would even say they agree with Carollo, but then, there are a lot of people who say and do stupid shit all the time, often against their own self-interest.

I suspect that Miami will somehow manage to muddle through the current collection of crooks and scammers who are now at city hall, and maybe some of their replacements won't be as bad, or maybe they'll be worse, because at the end of the day the issue is not what people's faces look like, it's what's behind their faces and in their character.

For that reason, the future of Miami, like it does in every major city in the world, depends on lots and lots of new people with new ideas and new hopes and dreams, and in Miami's case bringing a canoe with you to deal with the sea level rise, deciding to do what Will Smith said everybody should do: