IF YOU WORK FOR MOISHE MANA YOU DON'T NEED A SWEET TOOTH TO GET A SWEET DEAL FROM HIM, WHICH WAS GREAT FOR THEM, BUT BAD FOR THOSE WHO GOT SCREWED IN THE PROCESS

Another bad habit that seems to have started occurring since Colonel Klink has become the City Manager is his use of social media to promote specific businesses, like restaurants he eats at.

If he was doing this as a private citizen, there would be no problem, but he's doing this on what is clearly his City Manager Twitter page, and with the imprimatur of his official position. 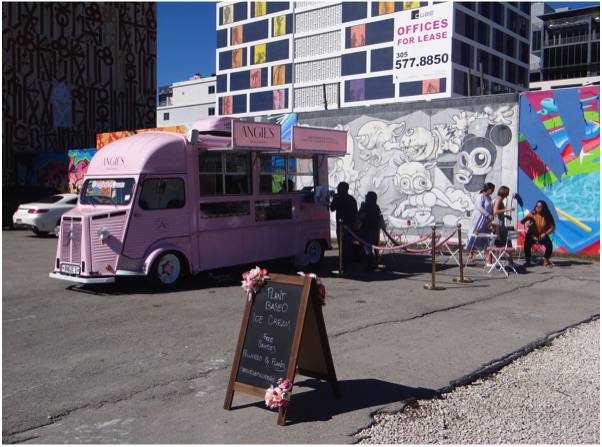 The fancy little ice cream truck parked on Mana property is owned by Dylan Finger and his wife Angie.

Finger is the managing director of Mana Wynwood, the convention and event space at the west end of the assemblage of property that Mana put together in order to request and receive a Special Area Plan permit from the city in 2016.

The creation of these Special Area Plans have become a concern to a number of folks in Miami including the majority of the members of the City of Miami's Planning and Zoning Review Board who last month voted to request that the city commission consider doing away with the creation of SAP's all together.

One of the important things about SAP's besides the accusations that they are now being used by developers as vehicles of massive community disruption and climate gentrification is the restrictions and rules that come with their creation and often ignored once the plan has been approved by the City Commission.

I first learned about this truck when I got a call in late January from Daniel Levine, the owner of Dasher & Crank, a brick and mortar craft ice cream shop located one block south of where the little pink ice cream food truck was parked.

The best way to understand his problems is to read the letter he had written to Mayor Francis Suarez a few days before calling me.

Given how badly the city is managed, I'm sure the mayor gets a lot of letters from business owners expressing their displeasure and frustration at the treatment they receive, but unless you're as rich and powerful as Norman Braman, chances are that he'll blow you off, which is what he did to Levine.

Before Levine sent his letter to Suarez, a number of other emails had been sent and responded to within the city's administration about the little pink food truck, emails that revealed that within the Mana organization there appeared to be either a woeful lack of knowledge about the terms and conditions of the SAP they had received from the city, or a decision that regardless of what the law and the SAP required, they were going to do whatever they wanted because Moishe Mana was rich enough that his representatives believed that  Mana's money allowed them to operate above the law.

Here is an email from Commander Dan Kerr to representatives of Code Compliance last November that detailed the problems with this food truck being on Mana's property.

On December 5th, Assistant City Attorney Domini Gibbs responded to Kerr's letter by informing him and others that the ice cream truck was illegally parked on the Mana property.

Unfortunately, what she didn't do is to instruct Kerr that since the food truck was operating illegally they should go and shut it down. 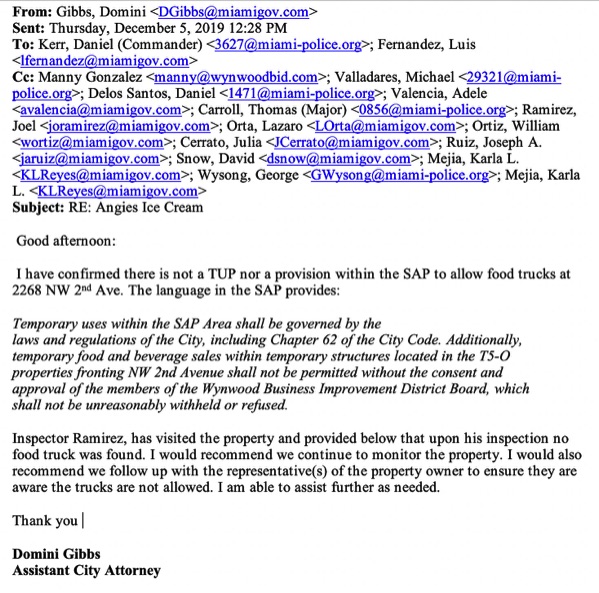 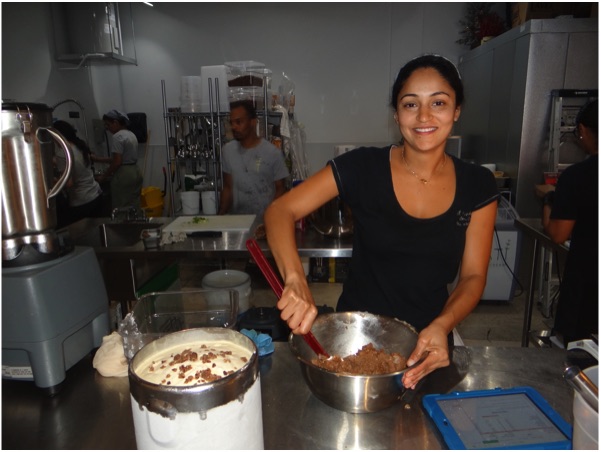 It was easy for Ms. Gibbs to advise Code Compliance to keep monitoring the property, because she wasn't dependent on customers to make a living, and for a lot of Wynwood businesses, including the two brick and mortar ice cream stores on either side of this illegally parked ice cream truck, they were loosing customers and income every day that the truck remained parked on the Mana property.

THE ECONOMICS OF BRICK AND MORTAR STORES VERSUS MOBILE FOOD TRUCKS

Food trucks became the rage because in part they were among the first disruptive industries that have become so popular today, and because they catered to young people who liked the quickness of service and the quality they offered.

It didn't hurt that food trucks became a staple on many of the foodie TV shows, and were touted by folks like the late Anthony Bourdain.

What few people bothered to think about then or now, was the impact that these food trucks had on regular restaurants and food vendors, including ice cream shop owners like Daniel Levine. 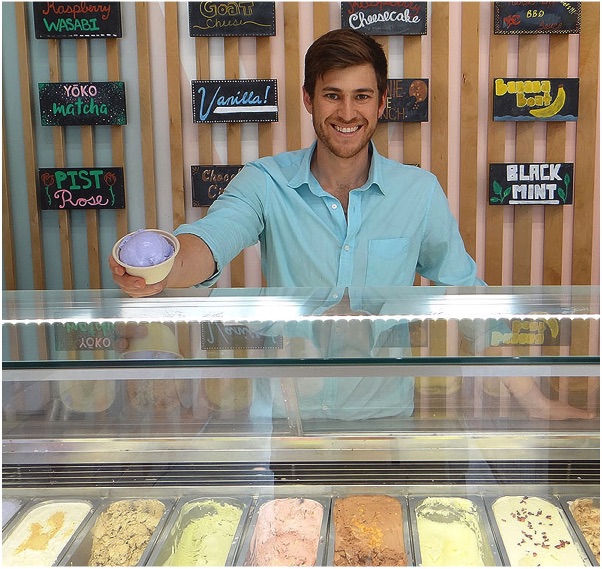 When I talked with Daniel Levine about the costs to open his business that he had referenced in his letter to the mayor he said that he estimated that he had spent over $100,000 including the build-out and various permit fees, including  a $19.02839 impact fee for roads because, he was told, people would be driving to come to his store. 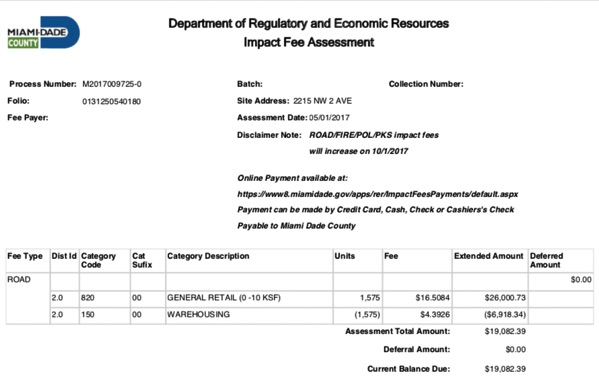 Ola Kayal, the young woman who opened NABATI, the only plant based ice cream store in Wynwood, and probably in the county, told me she had similar costs, and in addition she had to install a $15,000 grease trap, that came with a quarterly fee of $300 for inspection and clean out.

By comparison, I contacted the city of Miami to find out what permits and fees are required to put a food truck on city streets and the answer I got was $470 for a Business Tax receipt (BTR) and another $300 for a food license.

$470 versus thousands for permits, grease traps, and impact fees.

Somehow that doesn't seem right, especially since on top of all of those costs is the time it takes to deal with the City of Miami in order to get the required permits and inspections.

So what we have here is a story of two young entrepreneurs, both  willing to do things the right way, the expensive way, the bureaucratic, cumbersome way, who were put upon by a food truck that everyone in the city who looked at the situation came away convinced was operating illegally.

Yet, during the busiest time of the year, the time when they stood to make enough money to hopefully last through the next summer, no one was either willing, or capable of doing what seemed to be the rational, logical and right thing to do, which was to instruct Commander Kerr that he and his officers could walk up to the food truck and tell them, "You got 15 minutes to get all your stuff in the truck and drive it away, or we'll get a tow truck here and impound it."

Why could this happen?

Was it because the Mayor's cousin Andrew works for Moishe Mana?

Was it because City Commission Chairman Keon Hardemon had allegedly gotten Mana to give him $10 million dollars for the SEOPW CRA and therefore might have felt obligated to intercede on behalf of Dylan Finger, Mana's Director of Operations at Mana Wynwood?

Hardemon has managed to evade scrutiny on the issues described in this series, but Wynwood is in his District, and Hardemon is not a guy who lets much get past him when it comes to what happens in District 5, so the fact that I've only heard whispers doesn't mean he's not up to his eyebrows in any of this, but rather I've been to busy focused on the low hanging fruit to spend the necessary time looking.

No matter what, people who didn't deserve to get screwed did, and finally, when after Art Basal and the Super Bowl had come and gone the complaints issued against the food truck by Code Compliance reached the Code Enforcement Board, and Moishe Mana's attorney showed up to try and argue that because Finger and his wife had been, "advised by an outside attorney," that they weren't doing anything illegal, they should not be punished.

Fortunately, now that batshit crazy Frank Pichel and some of the other loony tunes who used to be on that board are gone, the current board members cut to the chase and informed Mana's attorney that they'd be subject to a $500 a day fine and removal of the truck if it  showed up on the property again.

The decision of the board was strengthened on Friday when the new TUP issued for Mana's property stated that the only 3 food trucks that had been previously grandfathered in in 2016 would be allowed on the property without there being certification that any new truck would be within 500 feet of a "Food Service establishment."

In practical terms that means that any food trucks could only be west end of Mana's property on NW 5th Avenue.

Here is the video of the Code Enforcement Board hearing, and Mana's attorney Leslie Sharpe.

The next time you go to Wynwood, try some ice cream. They have the4 best in town.