I'm sure you know the saying that goes that rich people are different than regular people, but what's often ignored is that part of that difference is that not all rich people are smart, and some are really stupid and only managed by birth and  luck to to become rich.

Take you for instance, you're a guy who in the last couple weeks has demonstrated that for someone whose supposed to be a billionaire not only do you have a very thin skin, but you're also dumb as a fucking rock.

In fact, are you even a real billionaire? It's true that you've got your name on a lot of corporate papers that represent buildings that those companies own, but how much, if any of the money behind those purchases is really yours, because you don't even come close to acting like a real billionaire, and in fact putting aside the billionaire claims you don't act like a developer either, but more like a speculator who on your own managed to contribute significantly to how shitty downtown Miami has become since you arrived and started buying up buildings.

A real billionaire and even most multi-millionaires would have long ago hired himself some really smart lawyers to protect his interests, which is something that you obviously haven't done.

A real billionaire, and even most multi-millionaires would be smart enough to NEVER send out barely literate text messages threatening a bunch of other multi-millionaire business owners and members of a group like the Wynwood BID and their Executive Director over decisions that were made NOT by them, but by city officials in Miami, and then to compound that act of stupidity by sending a threatening text message to a Police Commander, and then top it all off by deciding that you wanted to fuck with me by sending out the below text message.

Before we actually get to the text message, do you think that since you're supposedly a billionaire or even rich you might hire someone who knows how to spell to look over your emails and text massages, or at least buy a spell check program.  I mean really, "These crespo guy is a trash ex convect"

What kind of dumb shit is that? 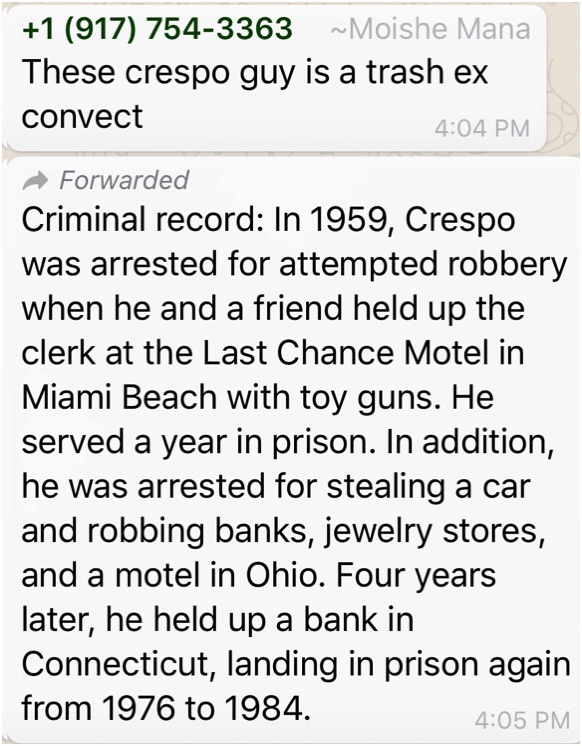 You seem to have sent ME this text as if you wanted me to know that you had discovered some deep secret that I didn't want anyone to know about, which obviously means you're clueless as to who I am or what I've been doing the last 36 years that I've been out of prison.

First, most of the information in the above text is wrong.

It wasn't me and a friend who robbed the Last Chance Motel on Miami Beach - like so much of of Miami Beach that motel is long gone -  it was me and two of my friends. I was the getaway driver and didn't have a gun.

In fact, I was 17 years old and was there only because I was trying to help a friend out what at the time seemed like a terrible situation, which is why I only got sentenced to a year in the county stockade.

Secondly, I've NEVER stolen a car in my life. What really happened was that me and my best friend broke into a car to get back something that belonged to someone we knew and we got arrested.

I originally got a year in county jail for that, but decided one night that I didn't want to do anymore time so I escaped from jail.

When I got caught, I ended up getting two years in Raiford, and spent most of that time on the road gangs. I've written about that in the piece that I've linked to below which I posted on this site last March that gives a Cliff-Note version of my life.

Thirdly, yes I did rob banks, jewelry stores and a motel in Ohio, and once I even wanted to rob a whole town in Kentucky, but got caught before we could pull it off.

I got 30 years to Life for Armed Bank Robbery in Ohio for robbing a Savings and Loan, and did 10 years before having my sentence commuted for my actions during the 1968 Ohio Penitentiary riot where I was the convict in charge of the surgery crew in the prison hospital.

You missed all of that in your so-called reveal.

After I got out, I ran for State Representative in Ohio as the Democratic party candidate, and after I lost, I decided that I hadn't been rehabilitated enough, so I went back to robbing banks.

The only thing that you got partially right about that period was that I did serve time, but it was between 1975 and 1984, and I was paroled from the Connecticut State Prison and sent to do my bank robbery conviction in federal prison after the warden in Connecticut suggested to the parole board that it would be best if they got rid of me for, "the betterment of the institution," because even though he had me locked up in maximum security I still managed to write and smuggle out stories about conditions in his prison.

So you see, this grand discovery of yours with its misspellings and half-assed facts isn't news, because I've  pretty much been a public figure all of my adult life, and since I walked out of prison in 1984, just about everyone in the state's film industry, and the the political world both in Tallahassee and in Miami, as well as people who have heard, or seen me on local radio and television talking about the stories I write about the city of Miami know all about my past.

In those 36 years that I've been out of prison, I had a successful career as a free-lance producer of TV commercials and music videos, and had the pleasure of working with many creative and talented people and managed to see a lot of places in this world on someone else's dime, and I also had a 2nd part-time career as a photojournalist with an award-winning coffee table book, and in the last 11 years I've become a pain in the ass blogger who found my true calling writing about public corruption in Miami.

Most people long ago quit giving a shit about my past and the only people who still continue to bring it up are the people like that moron Joe Carollo who thinks that talking about my past will somehow lessen the impact of the stories that I write exposing his malicious and vile behavior.

What you've done, like Carollo and other before him is called playing the Ex-Con card, and it's only done by morons who try to kill the messenger when you can't kill the message.

But, since you've shown a desire to expose my past like it's some big secret, I think that turn about is fair play, right?

What's up with your business partners?

In recent days I've received messages from folks who seem to be disgruntled former employees with stories about the hiring of illegal aliens, screwing people out of money, taking advantage of vulnerable young women, illegal payoffs...you know, all the usual shit that goes on in nightclub land.

Would you care to comment on any of that, seeing that the people alleged to be involved all seem to gravitate around you?

Instead of worrying about what banks I robbed 45 years ago, or how much time I spent in prison neither of which has any bearing or relevance to the behavior and actions of YOUR partners and the actions of the city of Miami, I think you might better spend your time worrying about what the people around you have been doing in the last year, that caused the city, even in spite of the supposed pull you think you have by having the mayor's cousin Andrew Suarez on your payroll, to finally decide they'd had enough bullshit from you, Tony Albelo and the rest of your crew and issued that TUP.

You know how you've made it part of your lore as a tough street guy by telling about how you got a phone call from John Gotti Jr., who supposedly threatened you, and you told him to come on over and get it over with, well I got one for you.

I was in federal prison with the Giacalone brothers, Tony and Jack, two Detroit mob guys and who brother Tony was allegedly the guy who invited Jimmy Hoffa to lunch the day he disappeared.

Tony liked to play the mob boss in the joint, telling people what to do and who to associate with. I used to play tennis every afternoon with another mob guy who Tony had a falling out with, and so one day Tony came to me and told me that I'd better quit playing tennis with this guy or else.

I told him that if he ever told me what to do again, I'd go get his brother Jack's wooden leg, and then come back and beat his fucking head in with it.

So, I know how to deal with mob guys too.

If you're unhappy because I started writing stories about you and your crew, here's the way to stop me from writing anymore stories: quit doing stupid shit!

MOISHE MANA, THE SUPPOSED BILLIONAIRE WHO IS LARGELY RESPONSIBLE FOR DOWNTOWN MIAMI LOOKING LIKE SHIT AND WHO NOW WANTS TO TURN WYNWOOD INTO A HONKY TONK BURBON STREET THOUGHT HE FOUND GOLD WHEN SOMEONE TOLD HIM I WAS AN EX-CON WHO USED TO BE A STICK UP GUY