When folks say that Miami knows how to party, they mean it, and consequently when the Super Bowl came to town, so did a lot of other folks interested in partying and others interested in separating folks from their money.

There were concerts and parties all over town, and then there was he Million Dollar Stripper Bowl that took place under these inflatable domes erected on NE 17th Street and 2nd Avenue, next door to the historic City of Miami Cemetery. 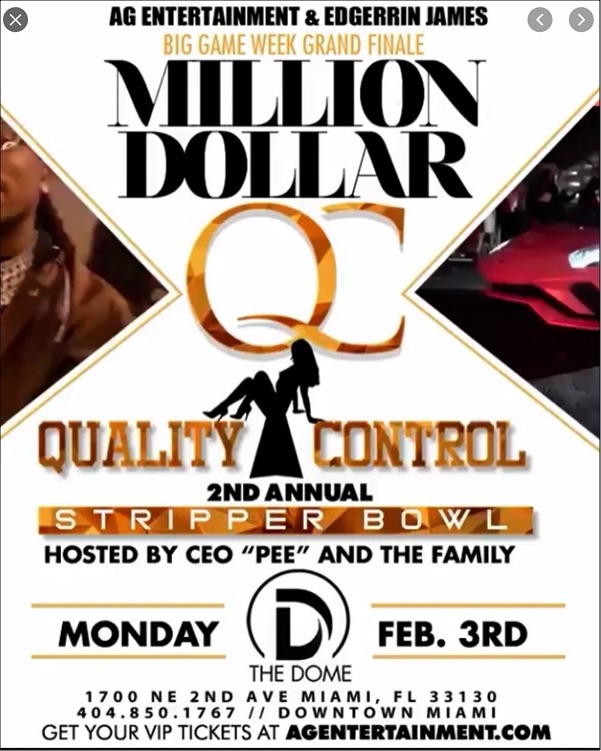 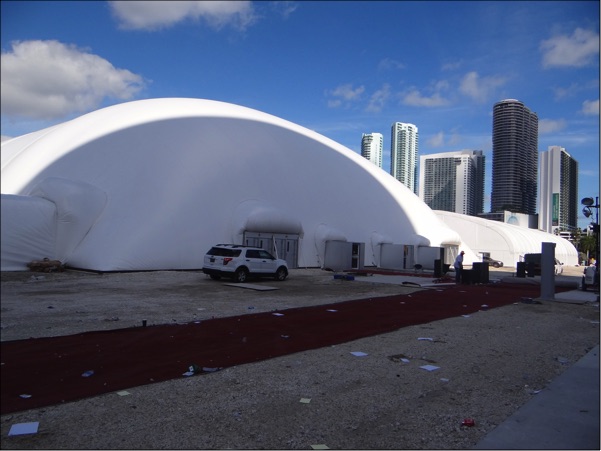 The word on the street before the event was that the promoters had gone to the bank and withdrawn a MILLION DOLLARS in dollar bills, and I guess it was the promise of all of that money floating around and stuck in G-strings and other places that was one of the lures for the strippers who showed up.

I don't suspect that many of those ladies knew until they came through the door was that none of them were going to get to keep a single one of those million dollars bills.

Here's a copy of the release they were all required to sign. 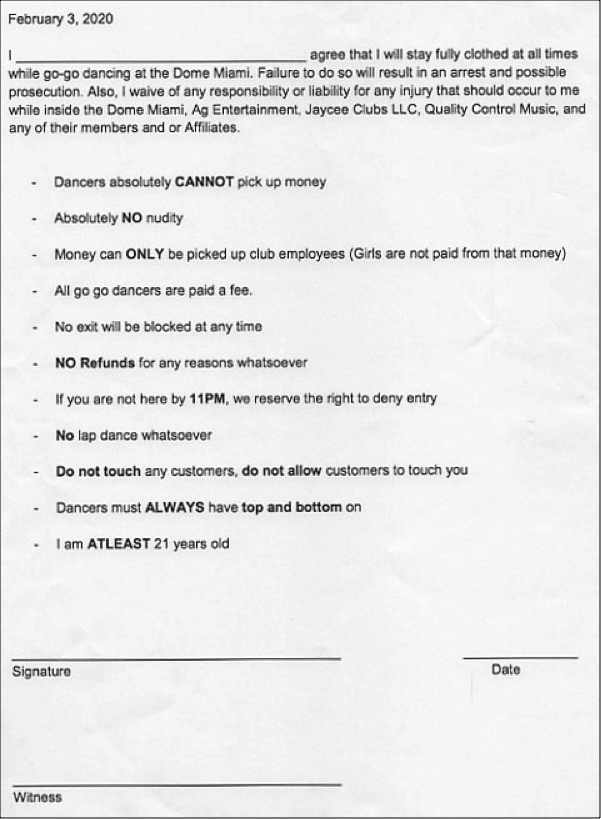 The events, and there were actually 4 nights of parties hosted in The Dome featuring different entertainers, managed as these kinds of events do, to piss off the neighbors, and in a strongly worded letter to numerous city officials sent last night by a resident living in the Park Lofts next to the the event informed the Chief of Police part of what went on:

"We, the residents of the neighborhoods abutting this

property, have endured  an abominable weekend that

extended through till Tuesday afternoon when the police

females” were chased from the tent."

What actually seems to have happened, thanks to Trey O Five TV, one of my Twitter followers who sent me the below screen grab overnight was that some of the ladies were unhappy with what they were paid, and refused to leave until they got more money. 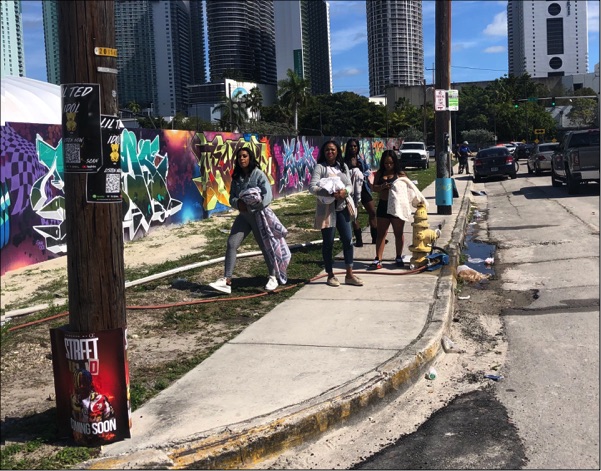 It should come as no surprise, based on the portion of the letter cited above, that not everybody in the neighborhood was happy to know that The Stripper Bowl was coming to their neighborhood, and not only had letters been written in the days before the event to city officials, but below is a copy of the letter sent to those officials, the Chief and others like me and Joey Flechas of the Herald on Tuesday evening.

I am writing this email as a follow up to the communications of last week. I had entered into an email communication with our esteemed city officials regarding the proposed events taking place in our residential neighborhood.

I received a reply from the Chief of Police and the Code Commission and Rebecca Wakefield that would have allowed my fellow Board Members at Parc Lofts, 1749 NE Miami Court to believe that we would be somewhat protected in this very uncomfortable situation.

Mr Soliman I made a freedom of information request for the temporary use permit and it was never sent to me which is a violation of Florida Statute Chapter 119.

I was advised by ALL that no adult entertainment would be permitted and assured that the police would be on hand to shut down the event in the event of such indiscretion.

I am attaching some photos from social media ( snap chat and instagram ) which suggest a level of dishonesty by city officials that is abhorrent . These photos are a mere example of what was posted about the weekend events for all to see, and yet our residents were unprotected. Not only did we have to contend with extreme noise until 5 am on Friday, Saturday and Sunday night, but Mondays event was finally shut down at 12.30pm in the afternoon.

Without suggesting that officials knew about the nature of this event and simply “turned a blind eye “ , I will ask you to explain how you believe the promotors got away with this without an inside hand.

Mr Colina, you said your force were aware of the goings on a

nd would be on hand not just to shut down but to arrest. This

was a blatant lie.

I shared your communication with our residents and we truly

believed that you were going to follow through with your word.

If you don’t call this an adult entertainment club, then what

How many underage women were involved?

How much cocaine and other illegal substances were sold?

How many drinks were sold to minors?

The streets were littered with filth. The posters  defaced our neighboring properties all weekend. The quality of  client was such that no neighborhood in Miami should be subjected to, let alone one such as ours- a peaceful residential area that we have spent years cultivating to get to this standard.

But all this is history. The event has come and gone. We, the residents of the neighborhoods abutting this property, have endured  an abominable weekend that extended through till Tuesday afternoon when the police finally arrived and perhaps a hundred “scantily dressed females” were chased from the tent.

Stripper Dome has finished but are these landlords going to be allowed to continue such despicable events. We have already endured the Halloween event with its blasting music and now this. Are you going to stop these landlords who are already involved in defacing the city ( demolition by neglect on the Historic Deauville Hotel) from ruining our neighborhood and by consequence the city of Miami?

My question now is this- Who is responsible for allowing such a travesty to take place? Are you all involved? Is there one guilty party?

Am I to understand that we have no civil rights and that our tax dollars are not there to protect our investments. I bought my property over 15 years ago and have faithfully paid my taxes every year. I don’t use the school system. So what benefit am I getting? What comfort am I receiving from government to assure me that my investment in the City of Miami was a sound one?

As of this morning, if these events are allowed to continue, our property values will tank. No one will want to live in this neighborhood.

And finally to sum it up, you said there was no permit, you said there would be termination of the event and prosecution based on adult entertainment- since you did neither, I am left to join the rest of the residents of Miami who believe there is rampant corruption within our system. 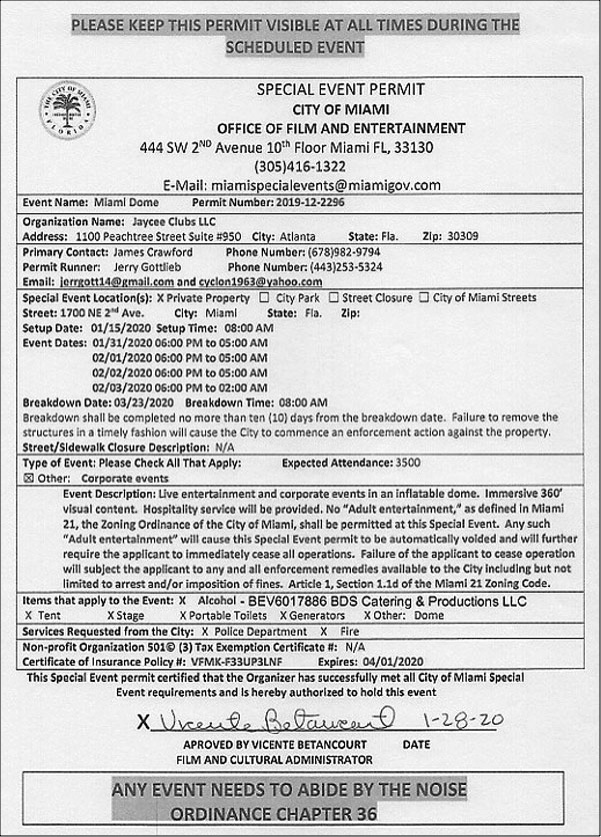 Even though  Ms. Ross claims that she was told that there was no Special Event Permit, there was indeed a permit, and you'll find it below.

Several things to notice in the permit is first, under Type Of Event, it was billed as "Corporate events."

Secondly, under description of event it states: "No "adult enterainment,"as defined in Miami 21, the Zoning Ordinance of the City of Miami, shall be permitted at this Special Event."

Here is the definition of "adult entertainment" from Miami 21: 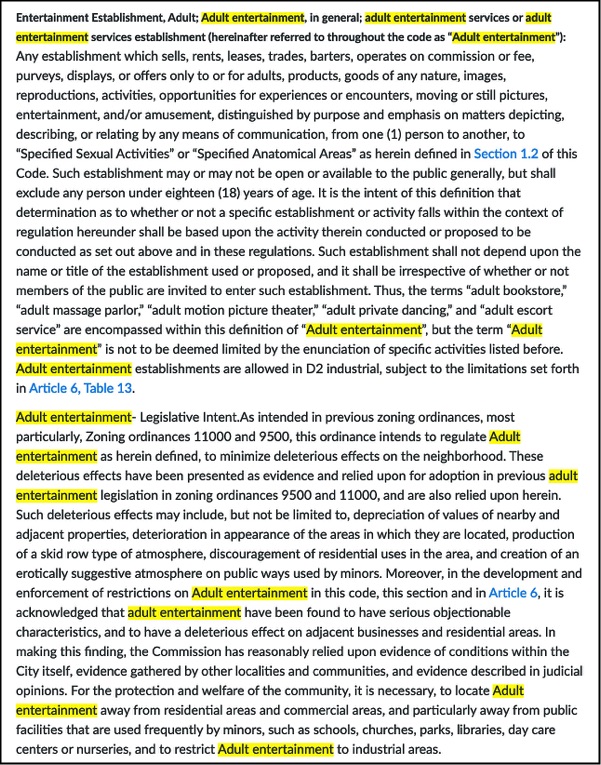 Lastly, the permit advises that the permit holders must "ABIDE BY THE NOISE ORDINANCE CHAPTER 36."

Here's a link to the video and Supplemental Agenda of the meeting where the SI Items were dealt with, and you'll not see SI-6 on the agenda, or in the discussion by the Commissioners.

The below images are screen grabs from another video of the event, that accompanied the above letter.

So, for all the folks in Wynwood and elsewhere who gritted their teeth and bitched about the excess noise all night long during Super Bowl weekend, your city commissioners were too busy arguing over who was, or was not going to be appointed to the DDA and the OMNI CRA, and all the other petty shit that they spent most of the meeting whining or bitching about, instead of taking care of the public's business.

The fact that this event took place not in an existing building, but in the termporary air-filled structures pictured above raises a question of whether instead of a Special Rvent Permit, a Temporary Use Permit (TUP), should have been issued.

TUP's are a lot more complicated, time consuming and difficult to get, unless of course you've got an inside connection or two at City Hall, so I'm going to side step that issue for the moment, but I will be getting back to you soon with a series of stories that I'm working on that feature revelations about how TUP's are used, abused, and faked to allow some of the big players in Miami's nightlife scene to pretty much get away with everything but murder.

Remember that name. There will be a test soon.

As always it's Miami, Bitches!

I couldn't find the link to the above story, but I did find a link to another story which also reported on the unhappiness of the strippers that includes videos of the event, and a link to all the YOU TUBE videos of the party now on-line.

Another Crespogram Ranger took this photo mid-afternoon on Tuesday as some of the ladies waited on the street for their Uber rides or pickups.