THE MIAMI HERALD IN THEIR SO-CALLED "REPORTING" OF THE MILLION DOLLAR STRIPPER BOWL WENT OUT OF ITS WAY TO IGNORE THE LEGITIMATE CONCERNS OF  RESIDENTS WHO LIVE AROUND THE VENUE, AND GAVE A FREE PASS TO THE SUAREZ ADMINISTRATION - SO MUCH FOR THEIR CLAIM THAT THEY DO JOURNALISM THAT MAKES A DIFFERENCE 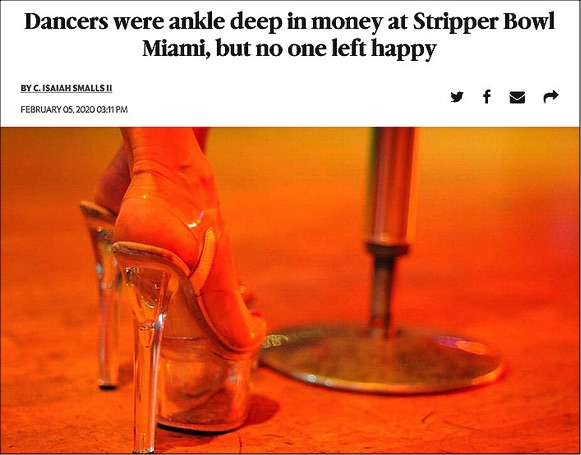 On Tuesday evening at 7:48 PM. I, along with a number of folks including the Mayor, the District 2 Commissioner, the Director of Code Compliance, and the Chief of Police as well as residents of residential buildings in the OMNI CRA District, and Nancy Acrum, the Editorial Page editor of the Miami Herald, along with Miami City Hall reporter Joey Flechas and several others received a copy of an email with an attachment of photos from Carol Ann Ross, a resident of Park Loft, a condo next to the empty lots where the air filled structures had been erected that detailed a number of concerns that she and numerous residents in all of the buildings adjacent to the property had with what happened over the weekend.

I did what normally try to do when I get an email like this, I reached out to folks to find out as much as I could, even though earlier that afternoon I had been tipped off about potential problems having occurred at that location and had driven down, taken some photographs, picked up a waiver flaying on the ground that set the terms of employment for the strippers who showed up, and then after receiving Ms. Ross's email I proceeded to organize a story including all the elements that I thought would be of interest to my readers, who were the residents of Miami.

The next morning, I woke up early, finished a rewrite of my story, verified some facts, tied up some loose ends and posted the story on my website.

At 3:11 PM, approximately 8 hours after I had posted, the Miami Herald posted their version of the story on their website. You can verify the time and date just by looking above at the screen grab of their story.

Unlike my story, which provided information not only about the fact the some of the strippers claimed they had been short changed as well as providing links to numerous videos that had been posted on YOU TUBE about that issue, I also incorporated a copy of the email that Carol Ann Ross had sent me along with several of the photos, and I also posted a copy of the Special Event Permit issued by the city, which Ms. Ross claimed she had been told did not exist.

I consider what I did to be basic shoe leather reporting. I provided both factual information and context so that the people who read my story would have as much information as I could give them in order to become informed on the issues surrounding the story.

The Miami Herald reporter on the other hand and for whatever reason chose to ignore the issues raised by Ms. Ross in her email - and he also failed to mention the Special Event Permit which Ms. Ross alleged that she had been told did not exist, but which not only DID exist, but which I had posted along with pointing out portions of that document were factually wrong.

In addition, I revealed, with a link to the city's website, that the Miami City Commission had failed to discuss or vote on the requested waiver of the noise ordinance during the Super Bowl weekend, which meant that all of the clubs in Wynwood and elsewhere in the city that kept residents up with their loud music had done so without permission from the city.

Any, and all of these issues you would have expected should have been part of the Miami Herald's story, because while the portion of the story dealing with the alleged mistreatment of the strippers was important, so was the fact that special events like this pop up in the city on an almost weekly basis, and often they result in problems for the residents of the city.

None of that information was anywhere in that article, and here is the link to that story so you can see for yourself. (CLICK HERE)

Why would the Miami Herald choose not to include any of this relevant information in their story?

I'm sure that they'll come up with reasons, but here's one reason they won't admit for why none of the information that I included in my story was included in their story. If they had,  they would have had to include somewhere in their story, "...as first reported by Al Crespo."

The Miami Herald would sooner, and has already on numerous numerous occasions buried or refused to do a story rather than to give me credit.

In fact, it's become a joke among some of my sources who tell me when Joey Flechas calls them up for information on a story the first question out of Joey's mouth is not about the story but either, "Does Crespo know about this?" or," Have you told Crespo about this?"

This is not only petty behavior, but is actually an indication of how little interest or respect the Miami Herald now has for the residents of Miami.

When the so-called newspaper of record refuses to report or provide factual information of importance to it's readers because they might have to admit that someone else is out looking for news besides their reporters, then the community is the one who suffers.

It's petty behavior, by a newspaper in rapid decline, who based on the current trajectory could very well be taken into bankruptcy by it's parent corporation, which in turn could result in the Miami Herald becoming just a news blog within the next few years.

So, since the Miami Herald refuses to publish real news for real people, maybe everyone who reads this should tell all their family, friends and co-workers that if you want real news about the city of Miami sign up below to get notifications

I'm far from perfect, but just scroll down to the stories I've posted this week, including my story about the Million Dollar Stripper Bowl and even when I'm poking fun at the stupidities of modern life I'm a lot more entertaining and informative than the pablum that the Herald puts out.