AN OPEN LETTER TO MAYOR FRANCIS SUAREZ ABOUT HIS ASSOCIATION WITH ALLEGED CHILD MOLESTORS AND ON HIS NEED TO STAND UP, FIGHT JOE CAROLLO, OR RESIGN

The year is a little more than a month old, and this has clearly been the worse period of time of your supposed public service.

You're now older and the Mayor of Miami, and I'm even older, and a lot wiser and jaded as I've watched you and the others on the Commission more often than not do things that raised questions  about your morality, your ethics and your commitment to looking out for the best interests of  the citizens who put you in office.

I've written about most of issues and incidents, and quite frankly as weary as I sometimes get of chronicling your misbehavior, I must say that the way that you handled the incident with Rene Pedrosa, has once again made me question whether you have the ethical compass to be an elected official.

We're all adults, and we've all experienced lust, desire and sexual longings, but there have always been bright lines over which no one with any sense dares to cross.

But they do, and Rene Pedrosa did.

In the initial Miami Herald story that revealed that he was under criminal investigation, it quoted you as saying that you had, upon questioning Pedrosa over the allegations asked him to resign. 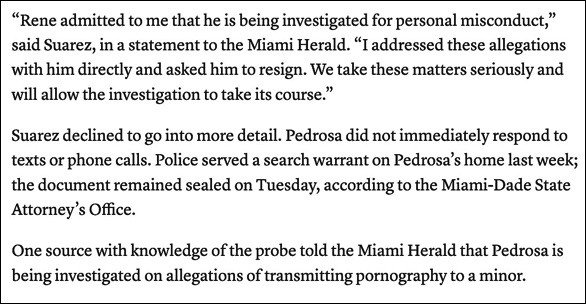 If Pedrosa had done to YOUR son what he did to someone else's son, would you have been so solicitous and merely asked him to resign, or would you at the very least fired his ass on the spot?

There is a tremendous difference between firing someone and asking them to resign, and part of that difference is in how that decision is seen by the public on whose behalf you serve and protect.

Time and again, people in power demonstrate both a tone deafness and a solicitousness to people who do or have been accused of doing some very bad things that is neither merited or warranted, and for some reason you seem have a bad problem when it comes to how you respond to men who are accused of child molestation. 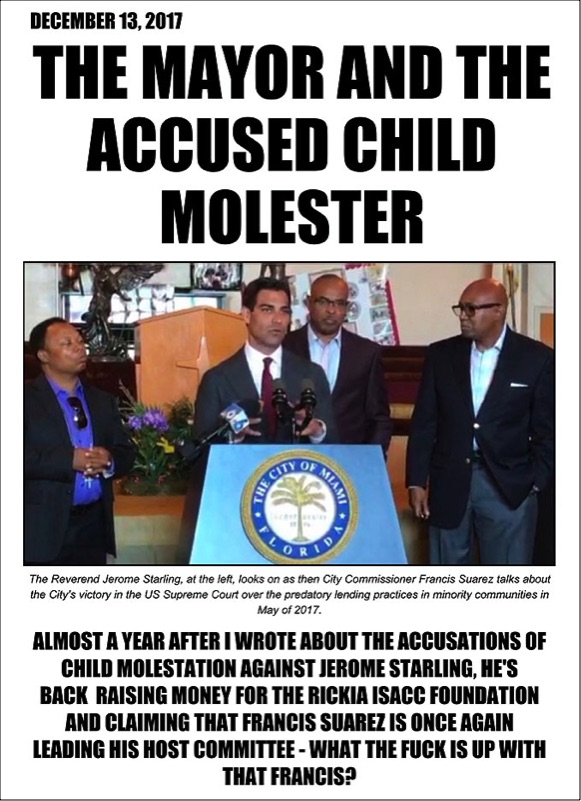 In that story, as in my original series of stories regarding the alleged activities of Jerome Starling, I included portion of the Miami Police Department investigative report, photos, letters and evidence that showed that you had visited my site and seen that original series.

Yet, almost a year later, you were still showing up at his events, posing for pictures with him, and allowing your name to be listed as a member of his Host Committee.

So, in following up with my question in my headline above, WHAT THE FUCK IS IT WITH YOU AND ALLEGED CHILD MOLESTORS?

Some of this shit involving Pedrosa was reported to have happend in YOUR offices, and your supposed anger and indignation was only enough to ask Pedrosa to resign!?

It is bad enough that a raving lunatic like Joe Carollo bitch slaps you at will during commission meetings, and is now planning on putting you into an untenable financial predicament with his scheme to introduce a change to the salary ordinance that would give you a raise, bur require that you give up your outside employment, thereby making it all but impossible for you to continue to cover the expenses of that $1.45 million dollar house you bought in Coconut Grove.

It's ingenious and meant to embarrass you if not cripple you financially, and to add insult to injury he's now he's using this incident with Pedrosa to tear you a new asshole and inoculate himself against the recall effort by  showing that he's a tough guy who'll stand up to protect the children of the City of Miami - even if it's only noise that he's making -  which is more than you've shown yourself capable of doing.

The city is in a really bad situation thanks to your soon to be departed City Manager Emilio Gonzalez and the band of incompetents like Adele Valencia that he inserted like cherrys on a cake to run the city, and you've now lost control of the City Commission to the cabal of Carollo, Diaz de la Portilla, and Reyes.

I don't consider Manolo Reyes a crook, but more of an unwitting co-conspirator, but there is absolutely no question that Carollo and Diaz de la Portilla are hell bent on looting the city in ways that no one can really begin to comprehend, and to top it off you are the Mayor whose supposed to stand up against this corrupt conspiracy.

On Tuesday morning you need to be front and center at the press conference that is going to be held outside of City Hall over the recall effort, and you need to sign a recall petition in front the the TV cameras.

You then need to pledge to raise as much money as Joe Arriola is donating, ask for a fist full of petitions, have Sneakers The Bodyguard drive you into the heart of District 3 and start knocking on doors to get people to sign recall petitions.

You don't do it for 10 minutes for the TV cameras, you do it ALL DAY!!

You come back the next day, and do it again. You become the real leader of this recall effort, and if you don't get the required 1500 - actually more like 2000 signatures - the next morning you file a new set of recall papers and start all over again.

You do to Joe Carollo what he's doing to you, only you wake up earlier, stay in the streets longer, and show him and the residents of Miami that his thuggish days are over with!

You fight for your future and the future of your city, because he can't kill you, and he can't eat you, so what do you have to lose?

If you don't understand that, and if you won't stand up and fight, then RESIGN!