TWO WEEKS AGO COMMISSIONER JOE CAROLLO WAS DEMANDING THAT COMMISSIONER KEON HARDEMON REVEAL HOW MUCH MONEY CITY MANAGER EMILIO GONZALEZ HAD RAISED FOR HIS COUNTY COMMISSION CAMPAIGN. NOW I WANT TO KNOW WHERE THE $40,000 THAT MARC "PAY FOR PLAY" SARNOFF LAUNDERED FOR CAROLLO WENT

The morning that Joe Carollo showed up at City Hall for his first commission meeting after being elected, following him through the door were former District 2 commissioner Marc "Pay For Play" Sarnoff, and former state senator Alex Diaz de la Portilla.

Both of them became regular visitors to Carollo's office on commission days, and it was clear from the very beginning that both of those guys, for their own reasons had strapped saddles on Carollo and planned to ride him like a bucking brono at the rodeo.

Diaz de la Portilla is now the new city commissioner for District 1, and Sarnoff has become, and no doubt plans to become an even bigger backroom wheeler/dealer lobbyist, given that after all the money he helped Diaz de la Portilla raise, he now has a saddle on him too.

I've written numerous stories in the past 11 years about the antics of both Marc Sarnoff and the huge amounts of money that raised, and the amount of money that now shows up in campaign and PAC accounts of politicians.

That money, which is for all intents and purposes is nothing else but legalized bribery, plays an important role in how the city, the county, and every other municipality in Miami-Dade County continues to make decisions about traffic, land use, and the delivery of services that often ends up being against the best interests of the residents.

Back before he got reelected, my limited dealings with Joe Carollo resulted in my believing that as crazy as he might be, the one thing I didn't think was that he was besides being crazy he was also a crook!

I now acknowledge that I was absolutely, 100% wrong.

Joe Carollo is one of, if not the biggest crook that has been on the Miami City Commission in years, and now that he has Diaz de la Portilla as a wingman - a wingman who is both smarter, more self-controlled and equally gifted when it comes to arts of political and financial chicanery - the citizens of Miami are in for a bad and bumpy ride.

This is one more reason that folks in District 3 should be lining up to sign the petitions to Recall Carollo. He has every intention to loot the city and with 3 votes and a compromised City Attorney who pulls legal opinions out of her ass when needed, he can go a long ways towards that goal with little opposition.

To get to where he wants to go Carollo needs money, and today's story is about how he raises money, $40,000 to be exact.

$40,000 was the amount of money that was donated to Marc Sarnoff's PAC, Truth Is The Daughter Of Time, by two guys who obviously didn't want to be seen giving Carollo campaign money directly, and more importantly, Carollo has to date failed to report that he received that money.

Here's how it happened.

On December 11, 2019, three donations of $5000 were donated to Sarnoff's PAC from CG Summer Investments, LLC, Doral Court Rental Investments and Terra City Center Investments. All of these donations are highlighted in Red. 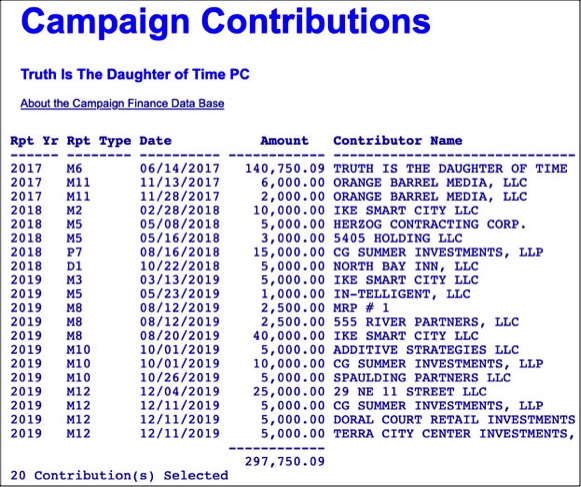 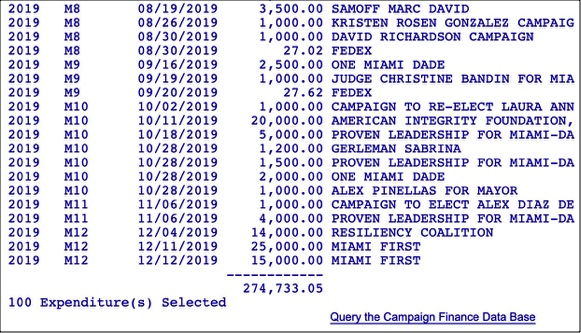 The following day, he donated another $15,000, for a grand total of $40,000. The amounts mirror to the dollar the money that Sarnoff  received from the 4 companies.

Who was behind the companies that donated the $40,000 to Sarnoff?

The first company, 29 NE 11th Street, LLC., is registered to World Class Holdings, which in turn is registered to Marc Roberts. Marc Roberts started out as a partner with Art Falcone and Nitin Motwani the developers behind the World Center project across from the AAA Arena. Along the way he had some financial problems but still managed to hold on to much of the property that makes up the Club District along 11th Street.

Among those properties is 29 NE 11th Street, the location of the club 11Eleven.

In 2014, in one of the stories that I wrote about the unsuccessful efforts of Sarnoff's wife to replace him as the District 2 city commissioner I wrote about some significant donations that had been made to Sarnoff's PAC, and one of those donations was a $20,000 donation came from 29 NE 11th Street. LLC.

Another one of the properties that Roberts owns is at 90 NW 11th Street, which he is currently trying to get the city to issue a COU for that would allow him to open a medical marijuana dispensary.

In that effort he is represented by Lou Terminello, of Greenspoon Marder, the same law firm that allegedly pays Mayor Francis Suarez $300,000 to be, "of counsel."

The effort to create some distanc between the $25,000 and any tie-in to the 11Eleven Club is understandable given Carollo's puritanical ways of going after anything having to do with sex.

It was Carollo after all who held the press conference before the Super Bowl to "expose" the adult entertainment that was supposed to occur on the party boat tied up on the seawall at Bayfront Park.

You cannot take too many steps in ay direction when it comes to the confluence of money and politics in Miami without bumping into one of the usual suspects, and clearly the connection between Roberts, Sarnoff, and Carollo all line up like Jupiter aligning with Mars.

The three $5000 checks are also easily traceable to another player who shows up frequently at Miami City Hall to hit the Pinata.

These companies: CG Summer Investments, LLC, Doral Court Rental Investments, are part of the David Martin, Terra Group empire, and he too has a history of giving big dollar donations to Sarnoff and Carollo, as well as his sweetheart deal in buying the Oak Street Parking Garage from Art Noriega and the Miami Parfking Authority. Noriega continues to be touted as the front runner to become the next City Manager, once Colonel Klink leaves.

To this point, what we have is just another view into the money that lubricates the connections between developers, elected officials and the screwing that the public gets when the elected officials are called on to make a decision that results in a Return On Investment (ROI) for those campaign dollars.

But this is a little different, because in this case we have another little trick that I've written about in the past, and which reveals the way in which donations like this disappears.

By rights, if you were so inclined, you should have been able to go to Carollo's financial reports for Miami First and see when that money was reported.

In this case, that money should have shown up in the finance report for the month of December 2019, given that he received $15,000 from another deep pocket developer on the 13th.

But, as you can see the December report doesn't incude the $40,000 in donations from Sarnoff's PAC. 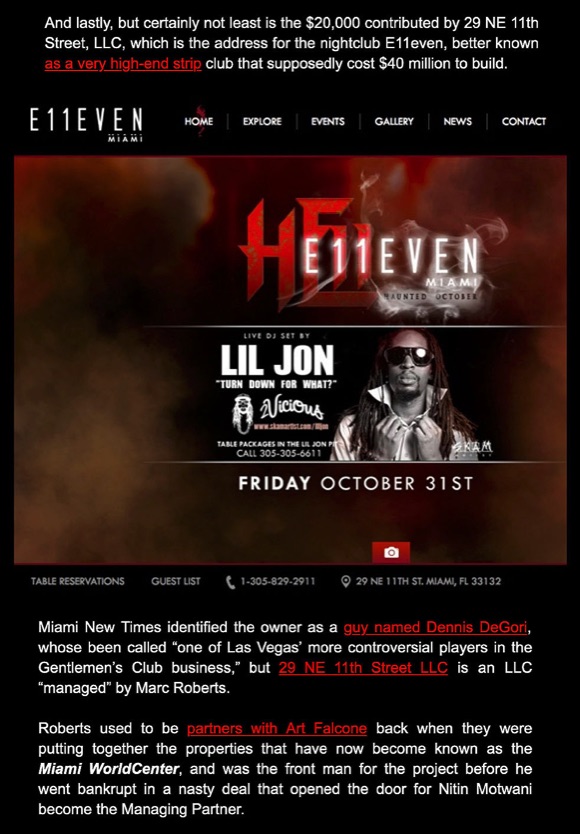 I've written about this sleight of hand in the past. Money gets churned in and out of one PAC to another, and then it goes into the PAC of the intended recipient, and just disappears.

The campaign laws and the oversight of the Florida Elections Commissionare so lax, that if you file a complaint, it takes them months, if not longer to even investigate, and by then the money has been "reported" and the excuse given is that it was just an innocent oversight.

When dealing with corrupt politicians in Florida, there are no coincidences or innocent oversights.

When politicians need pocket money, or money for things that they don't want anyone to know about money to PAC's and ECO's go into a rabbit hole.

Given the timing of these donatons, maybe this was the money that Carollo spent on the trip to Paris and elsewhere with wifey during the Christmas holidays.

Now that Carollo is now facing a recall, if he hasn't spent all that money how sweet do you think it is to have parts or all of that $40,000 of untraceable money to defend himself.

MOney that no one would have known about if I hadn't written this story.