THERE ARE RUMORS THAT MIAMI CITY MANAGER EMILIO "COLONEL KLINK" GONZALEZ HAD PLANNED TO RESIGN AT YESTERDAY'S COMMISSION MEETING, AND THOSE RUMORS GAIN CREDENCE BECAUSE HIS LOYAL SIDEKICK, AND DEFACTO CITY MANAGER JOE NAPOLI, ACCEPTED A JOB TO BECOME THE CITY MANAGER OF COOPER CITY, BUT THOSE ARE ONLY TWO OF THE NEW REVELATIONS THAT THE CRESPOGRAM IS REVEALING IN THIS MORNING'S POST, INCLUDING EMAILS FROM THE MAYOR, THE CITY ATTORNEY, THE INDEPENDENT AUDITOR AND COMMISSIONER REYES

The plot thickens as more and more information surfaces about the craziness that occurred in front and behind the scenes at yesterday's Miami City Commission meeting.

First, while Keon Hardemon was initially absent because of the flu, Carollo seized on the opportunity and attempted to open a can of worms over whether the Mayor or the Commission had to power to appoint the Chairman and Vice Chairman of the Commission, and whether Commissioner Russell had the authority to chair the meeting even before the meeting could get underway.

While Carollo's effort initially appeared to be little more than a semantic game of rope-a-dope, it managed to go on longer than it should have because in another flagrant example of how City Attorney Victoria Mendez continues to play both sides against the middle, she did her best to try and argue that while the City Charter gave exclusive power to the Mayor to delegate someone to assume the role of "Presiding Officer" during commission meetings, the commissioners could rely on Masons Rules of Order to go around the mayor and make their own appointments bestowing various honorific titles if they so wished.

Like so many other issues, behind the curtain this argument has implications and ramification beyond who gets to chairs meetings, because legally, the City Charter does not include the terms Chairman and Vice Chairman, but only designates the right of the Mayor to appoint someone to take his place as the "presiding officer" to chair the commission meetings if he so chooses.

While history and common practice has seen the use of chairman to be interchangeable with "presiding officer," they in fact could actually represent very separate things, and when it comes to Joe Carollo and Alex Diaz de la Portilla, one should always focus on following the money.

Most people are unaware of this, but the title of Chairman of the Commission represents more than just a fancy title, it also represents an additional $100,000 of funny money that that person can spend on anything he/she wants. 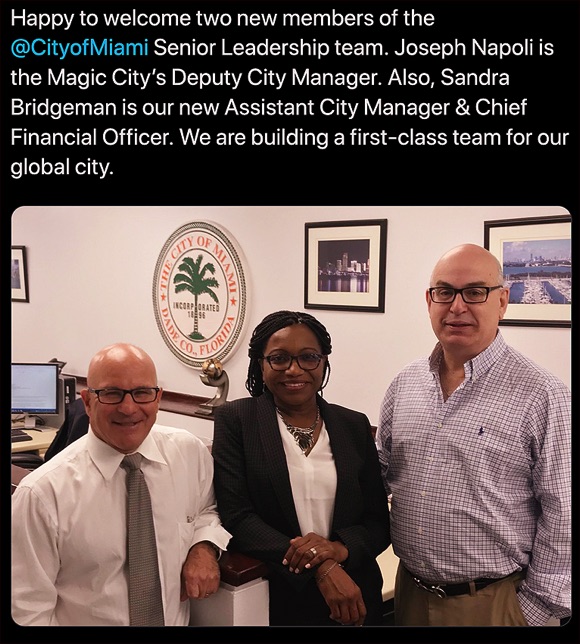 If the commissioners ever get around to voting to give themselves pensions, this extra $100,000 would have a significant impact on the total taxable income used to calculate the benefits to whomever is the commissioner when he/she resigns/retires.

I cannot emphasis to strongly how all of these disparate actions are not random or spur of the moment, but are being thought out and planned well before the meeting, and that all of this activity is part of an ongoing and flagrant abuse of Florida's Sunshine Law.

These guys are scheming on a daily basis and turning to Victoria Mendez for legal guidance, as evidenced by the portion of the commission below that shows her trying to provide Carollo a legal basis for his argument that the commissioners should be able to choose whomever they want as Chairman and Vice Chairman.

You can bet this this issue will surface again, and sooner than you think.

Following this exchange, I have been told that it so alarmed Francis Suarez over what else Carollo might try to pull before the meeting ended that he supposedly called Keon Hardemon, and told him that he absolutely, positively needed to come to City Hall, and sent a Sgt-At-Arms with a car to pick him up.

The thing that had the Mayor, Commissioner Russell, and even  Hardemon alarmed, and that probably was the real reason why Hardemon agreed to get out of his sick bed was that above and beyond the efforts that I previously described about Carollo playing snitch with the FDLE and the State Attorney to fuck with Hardemon was the possibility that in addition to stripping Russell of the chairmanships of both the OMNI CRA and DDA, there would be an effort to take away Hardemon's chairmanship of the SEOPW CRA.

That news alone would have been enough to get Hardemon to crawl out of the grave, because the SEOPW CRA has been - and will continue to be - a very important agency both politically and financially for Hardemon and the people who he has to feed to keep happy.

But even that was not the most amazing rumor to surface after the meeting, That rumor was Gonzalez had supposedly planned to use his "Personal Appearance," at the beginning of the meeting to tear Carollo a new asshole, and then after the Mayor's veto was upheld - a fact that would have occurred because Carollo needed a 4/5 vote by his fellow commissioners to override the veto and wouldn't have succeeded because there were only 4 members present - Gonzalez would then as his Grand Finale announce his resignation, with a possible threat of a lawsuit against the city.

I have written Gonzalez asking for a comment on whether he was planning to resign, and he has not replied.

While this might initially sound far fetched, the word is that Joe Napoli, who has been the day-to-day city manager while Gonzalez has wined, dined and traveled around posing for selfies has been offered the position of City Manager of Cooper City in Broward County, and is going to take the job.

Without Napoli to actually handle the day to day operation of the city, Gonzalez would have been lost, and that strengthens the belief that he was in fact ready to resign, as part of a one-two punch.

,Much of this is now in limbo as a result of the way in which the commission meeting was abruptly adjourned, because had Gonzalez plans gone as he expected he would have left without an investigation hanging over his head.

That now seems to have blown up because of the string of letters and emails below.

The first email is from the Mayor to Independent Auditor informing him that because his veto was not overridden, he is to stop his investigation of the manager.

This next email is from the Independent Auditor to the City Attorney asking for guidance on the Mayor's letter. 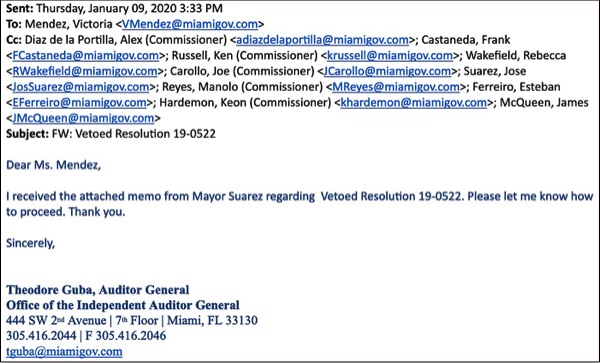 This next email is from the Independent Auditor to the City Attorney asking for guidance on the Mayor's letter. 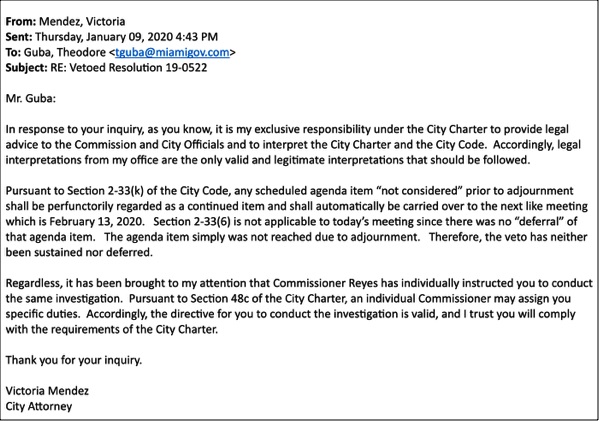 Finally, a response to the Independent Auditor from the City Attorney informing him that regardless of the Mayor's instructions, the directive he received from Commissioner Reyes is valid and he is to proceed with the investigation.

The thing to keep in focus about this investigation is that it's really not an investigation of Emilio Gonzalez, but rather, it's an investigation of the specific actions taken by a handful of city employees in allegedly illegally processing the paperwork cleaning up an illegal construction of a deck at the house owned by the City Manager.

What's also worthy of investigation is why the Director of Code Compliance, Adele Valencia, did not do what she did after the press conference held last year by Bill Fuller over the illegal construction and destruction of a tree on the property owned by Commissioner Joe Carollo and send a team to investigate whether any code violations had occurred on Gonzalez property as a result of this alleged illegal construction.

Now that's a separate story, that I'm surprised that Carollo hasn't raised already because what's good for the goose should be good for the gander, but then again, Gonzalez is the one who gave this incompetent moron her job, and in turn her failure to do her job is just a quid pro quo for that gift.

In many ways, the meeting yesterday, was an example of what will continue to be a pattern of behavior at Miami City Hall until either Joe Carollo is removed from office, or Francis Suarez resigns.

It's both that simple, and that stark a solution. Carollo gets indicted for any one of the multiple misdemeanor charges that he could be indicted on for City Charter violations, or Suarez finds a job with a fancy title and leaves, because Carollo will not quit trying to take over as the Miami equivalent of a petty despot dictator, and Francis Suarez, will continue to lack the physical courage and political savvy required to fight Carollo on his play ground.

There are those - and some have already started - who will claim that yesterday was a victory for Suarez because it made him look sane when compared to Carollo and even Hardemon, but you have to remember that the only reason Hardemon was brought from his sickbed was that Suarez didn't believe he could handle Carollo, and neither could his sidekick, Commissioner "Sellout" Russell.

The real loser yesterday was Francis Suarez because the meeting demonstrated that when push comes to shove he no longer has control of the City Commission, because he can only rely on 2 votes, and even then, Keon Hardemon will go against him if it serves his own purposes.

The real person that everyone now needs to keep his eye on is Alex Diaz de la Portilla.  He was the one who made the motion to adjourn the meeting, and he is the one who brings a whole new level of political gamesmanship to City Hall.

Both Carollo and Diaz de la Portilla represent the ones with the most political experience but Carollo has always been hampered by the venom and uncontrollable vicious impulses of getting even that color many of his actions and decisions.

Carollo is a classic hater, and that hate drive him even when common sense reveals that sometimes it's in his best interest to just keep his mouth shut.

The dynamic between Carollo and Diaz de la Portilla will be the thing to keep your eye on. They will remain allies until one decides to fuck the other one, but until that happens, they are in cahoots, along with Victoria Mendez in fucking over Francis Suarez, and in the process a lot of people are going to get fired or hurt as these two guys, along with a reluctant Manolo Reyes show you why Miami is not only a Banana Republic, but a gangster paradise as well.