Howard Cohen has written an excellent story about the life of attorney Rick Ovelman who died on Monday and I recommend that you read it HERE.

Back in the 90's when I first started my quixotic journey of talking back to public officials I was floundering around trying to figure out how to file  my own public record lawsuits - contrary to popular opinion I was never a jail house lawyer as some people claim - and somehow, someone who knew Rick told him about me, and Rick asked him to tell me to give him a call.

I met Rick and somehow he expressed great joy in the fact that a guy like me was doing what I was doing, and both encouraged me, and more importantly offered to review my lawsuits before I filed them, which he did along with explaining the importance and intricacies of the public records law all of which became the foundation for everything I've done since then.

I ended up filing over a dozen pro se lawsuits against the Governor. the Florida Lottery and most importantly the Florida Entertainment Commission - a public/private partnership group created by Governor Lawton Chiles - over their refusal to turn over the documents, and thanks to Rick's help I won every case, including the one against the Lottery that forced them to let me look at over 20,000 pages of documents related to the various board members of the Entertainment Commission receiving no-bid contracts, and in one case a very rigged contract on the TV game show they produced back then.

There was one case that got completely out of hand when I sued the Entertainment Commission over their refusal to turn over some documents and they got cute by counter-suing me claiming that they had given me the documents to look at and then I had walked out of their office with them, basically "stealing" the documents.

The day before the trial I went to Rick's office to go through my strategy, and after he read all the documents and I explained how I was going to try and defend myself against the counter-claim he realized that I was being set up and needed a real trial lawyer. He called his friend Richard Sharpstein and his wife and asked them to drop what they were doing and come to his office.

After Rick explained the situation to them they agreed to represent me for free, and the next morning we went to court and Richard cleaned the other lawyer's clock, forcing him to withdraw his counter-claim that I had stolen documents, and ended up getting the judge to grant me a permanent injunction against the group's behavior in withholding documents from me.

If it hadn't been for Rick Ovelman calling in a favor on my behalf and the courtroom skills of Richard Sharpstein I doubt very seriously that I'd have survived that trial.

Richard went a few years back, and now Rick is gone, and Miami is worse for their departure.

One of the blessings of my life is that I had the opportunity to be befriended by a guy like Rick Ovelman, and my sadness is that his death deprives others from that blessing. 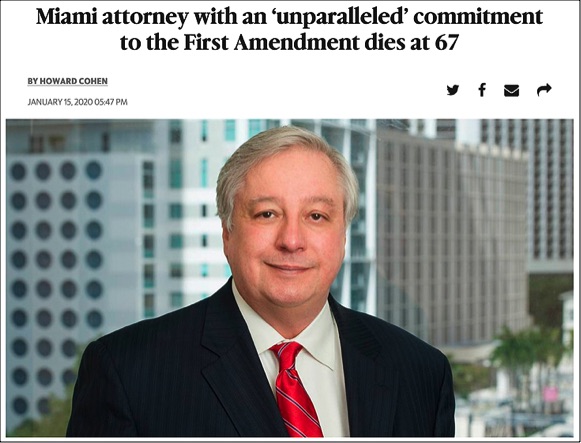