I first wrote about the alleged problems with the finances of the MSEA Board in May of 2018, when City Manager Emilio "Colonel Klink" Gonzalez responded to a question about the annual audit of the board by stating that:

"Last week some information was brought to my

attention regarding some possible discrepancies

Although the Independent Auditor released an audit in July of 2018, that audit was never discussed nor the challenges to it's conclusions made by Blanco were resolved by the MSEA Board at the September 2018 meerting where the board voted to abolish itself, and since then Lourdes Blanco, who was at the time the Executive Director of MSEA continued to argue that the audit failed to address a number of issues concerning how the city managed the money it supposedly collected from leaseholders of the property controlled by MSEA.

Last week, two days after Christmas, Blanco filed a long awaited lawsuit in an effort to force the city to comply with Florida Public Records Law in releasing a number of documents that she believes will reveal that the city and the other named defendants engaged in a systematic pattern of withholding documents and engaged in financial hanky-panky. 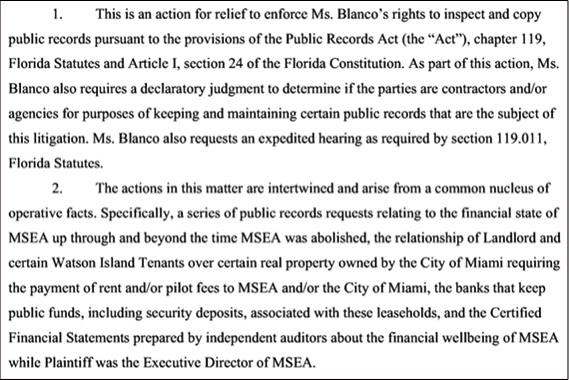 What's interesting about this lawsuit is the meticulous detailed description of the documents that Blanco alleges have been withheld, and how they all point to both a willful act on the part of all the parties involved to engage in a consistent and possibly coordinated effort to withhold documents, but also that if the detailed allegations contained in the complaint are accurate, a revelatory look at how the city's has played fast and loose with the monies involved.

This is just one of the new lawsuits coming in 2020 that will warrant attention on the part of folks who actually have some concern about the future of the city.

Here is a copy of her complaint.