MASTEC, THE COMPANY OWNED BY JORGE AND JOSE MAS - THE SAME GUYS WHO NOW WANT MELREESE GOLF COURSE FOR THEIR BILLION DOLLAR DEVELOPMENT DEAL - IS TRASHING THE CITY OF MIAMI ONE NEIGHBORHOOD AT A TIME

MASTEC, one of the largest Hispanic owned companies in the United States, owned by Jorge and Jose Mas, who have been at the center of a protracted and sometimes hostile struggle with members of the City of Miami Commission over their efforts to obtain a lease on the city owned Melreese Golf Course in order to pursue their goal of developing a BILLION DOLLAR project that would include a soccer stadium, along with office, commercial and 750 room hotel, is  systematically trashing neighborhoods all over the city as they lay fiber optic cable for clients such as AT&T, Verizon,  FP&L and Bellsouth.

In documents obtained by the Crespogram News, the trail of violations and fines is actually quite extensive, since it appears that no matter where MASTEC equipment and workers show up, damage to city sidewalks ans streets soon follow.

The documents below - which were cropped to make them viewable - detail the various companies that MASTEC was laying cable for, the locations and the amount of the fines.

NOTE: The documents contain duplicates of the some of the violations and fines in 2019. I subtracted those amounts - $44,000 - from the final total of fines paid.

While some damage is bound as a result of the process that is used to lay cable, MASTEC has been accused, and fined for a failure to obtain permits, a failure to secure sites, blocking traffic, and an overall mistreatment of neighborhoods.

In District 4, while doing an un-permitted job, they destroyed new curbs, driveway approaches and sod as detailed in this email from the city to MASTEC.

It took from September until a couple days ago, along with an email sent to all of MASTEC's clients from the city notifying them that all of their projects were being shut down before Jose Mas realized that he was in real trouble and sent out the following email. 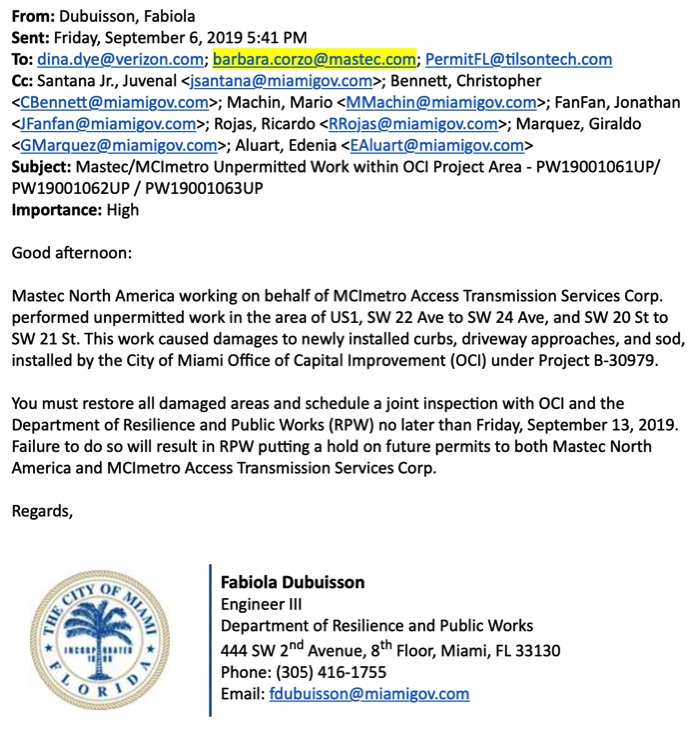 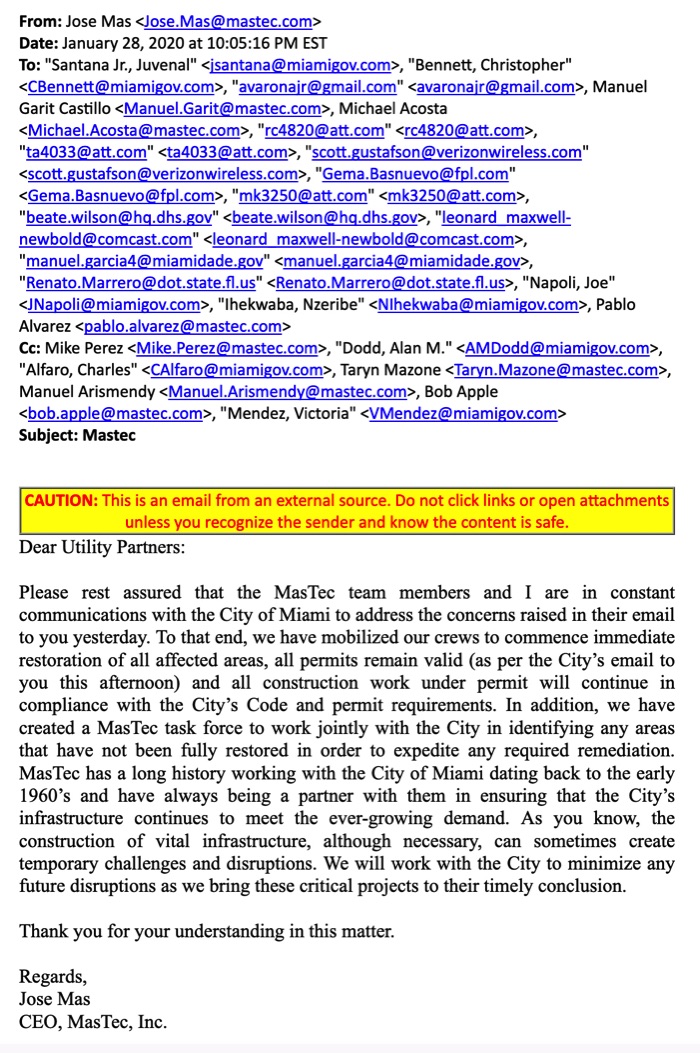 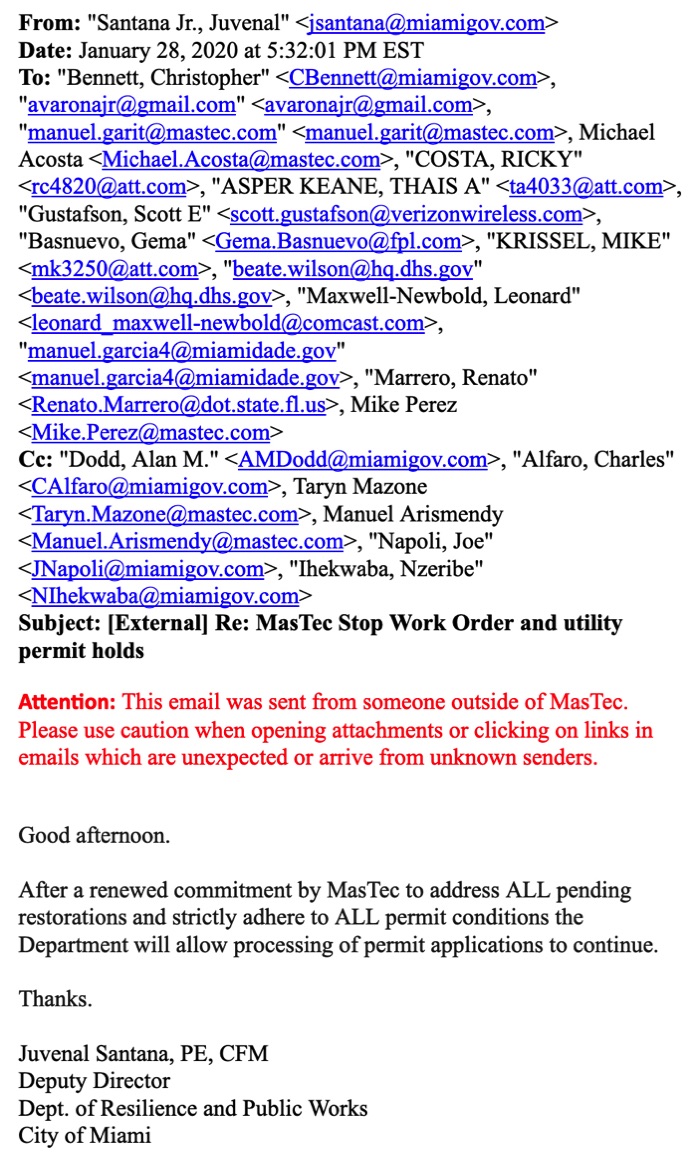 I don't know who Jorge Mas spoke to in the city, although I would suspect given his exhaled status he probably spoke to the Mayor, with whom he seems to have a very personal relationship - yeah, I'm being snarky - but whatever promises he made to Francis Suarez resulted in the following email from the city being sent to all of MASTEC's clients.

It's understandable that a company who spends it days drilling under sidewalks and streets to lay fiber optic cable and other cables required in the 21st century is bound to have the occasional lawsuit because they screwed up somehow, and a search of the Miami-Dade Clerk Of Court website reveals that MASTEC has indeed been the subject of lawsuits alleging negligence and incompetence, as evidenced by the portions of two lawsuits posted below. 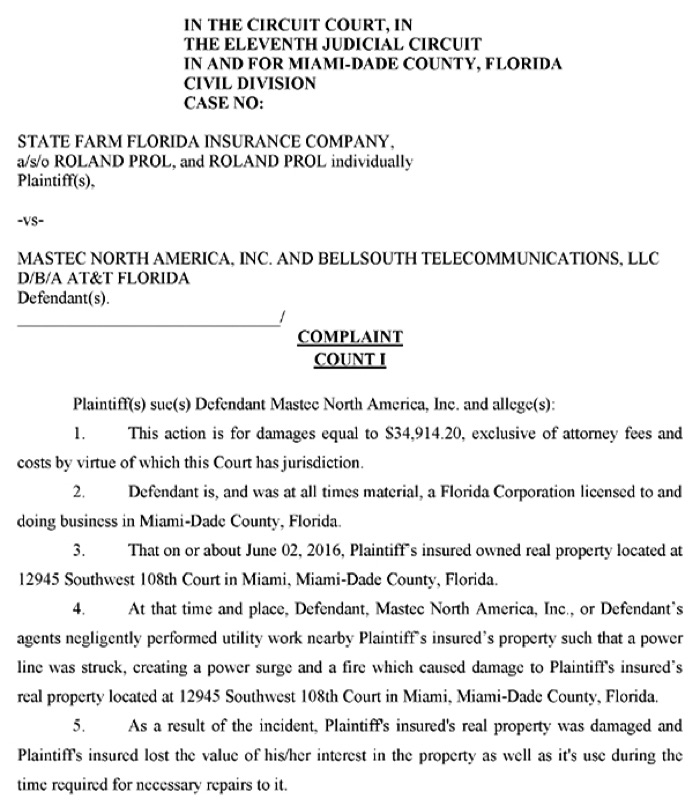 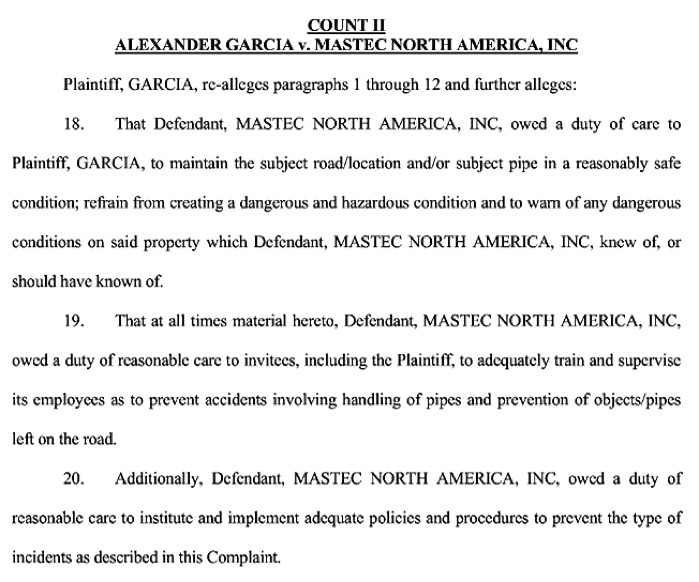 What should be evident, although it was never discussed during the time that Jorge Mas, and David Beckham were bullshitting their way through the city commission meetings in the summer of 2018, in their effort to get the commission to allow a referendum to go on the ballot was that MASTEC has a very long and litigious history for not only doing sloppy work, but also for shrugging off the legal costs of that shoddy work as just a cost of doing business.

That they would treat the city of Miami in the same way at a time when you would have expected them to go out of their way to be on their best behavior instead of generating hundreds of thousands of dollars in fines and penalties for trashing city neighborhoods doesn't necessarily bode well for how they will treat the development and construction of the Melreese Golf Course property if they manage to get their hands on it.

I've been told that this isn't the first time that Jorge Mas has had to promise the city that his company will start behaving better, and I suspect that it won't be the last, but this time there's a BILLION DOLLAR DEAL on the table, and if one believes that the past is prologue, then the city and the residents of Miami can expect that  if a lease is approved allowing Jorge Mas and his partners to take over the golf course, then they should expect to get their share of negligence and incompetence as the project goes forward. 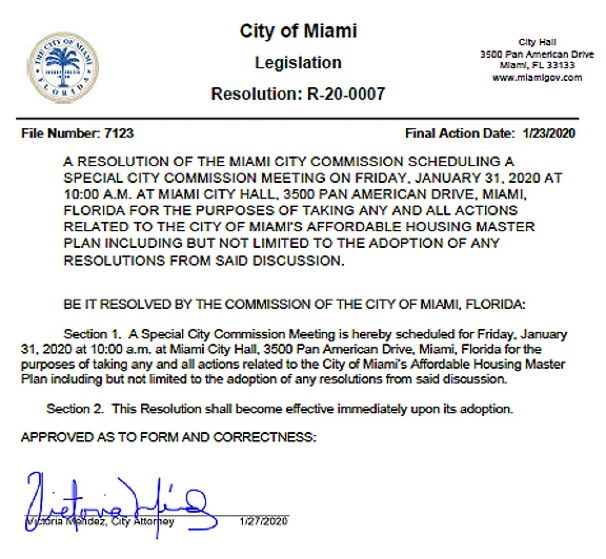 FOREWARNED IS FOREARMED - FOLKS SHOULD PAY VERY, VERY CLOSE ATTENTION TO WHAT HAPPENS AS THIS MEETING BECAUSE THIS IS THE HONEYPOT THAT COMMISSIONERS CAROLLO AND DIAZ DE LA PORTILLA ARE HOPING TO USE TO FINANCE THEIR FAMILY AND FRIENDS PLAN, AS WELL AS A CASH REGISTER FOR THEMSELVES 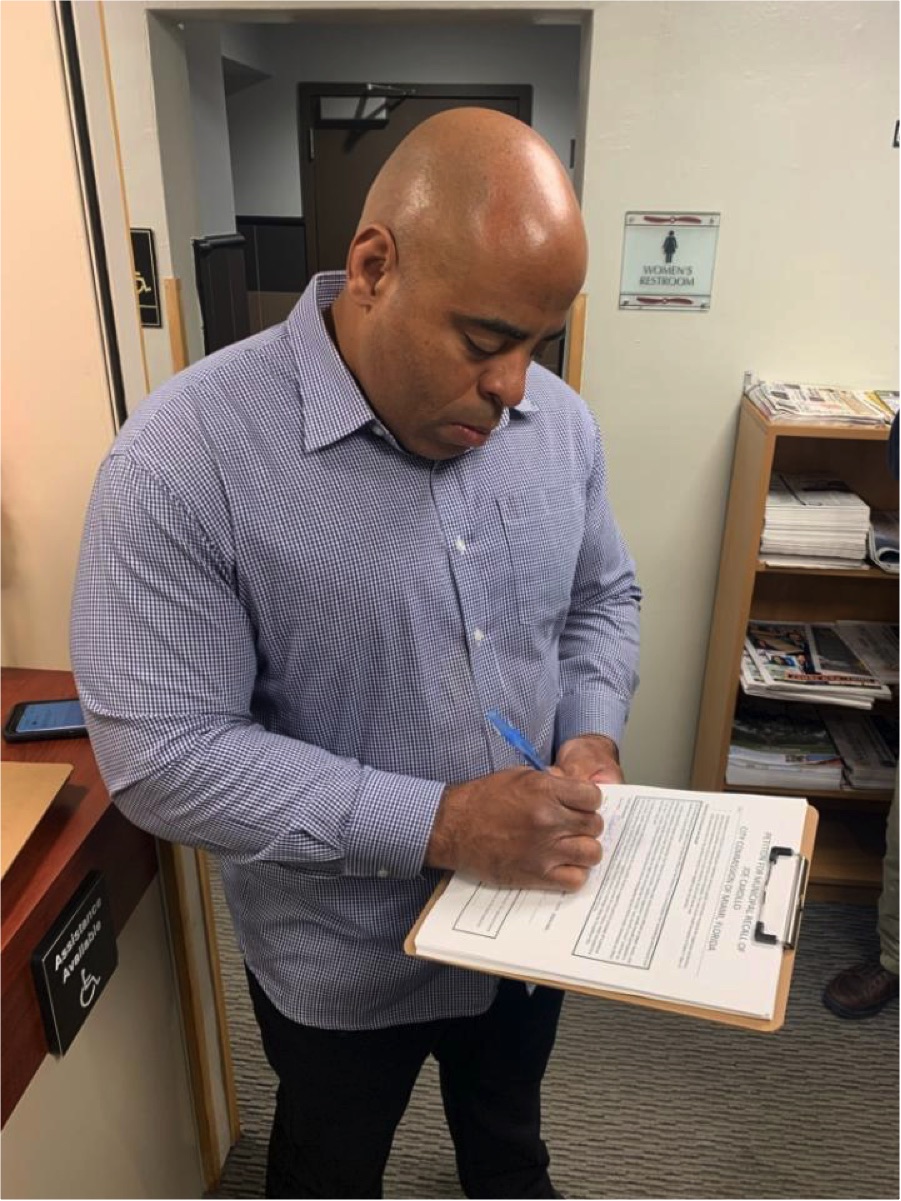 Rob Piper, the Chairman of the PAC, political activist Juan Cuba, and City Clerk Todd Hannon go over the requirements of the reporting requirements for the PAC.

The official start of collecting petition signatures will begin on Saturday morning, February 1st, at Domino Park on SW 8th Street and 15th Avenue, in between Domino Park and the Tower Theater, at 9:30 AM.