COMMISSIONER "COMEMIERDA" CAROLLO'S  SALARY IS $58,200.00. THE TAXES ON HIS HOUSE IN THE GROVE ARE ESTIMATED TO BE $25,917.29, AND HIS LATEST ANNUAL FINANCIAL REPORT CLAIMS A SECONDARY SOURCE OF INCOME THAT TURNS OUT TO BE FALSE. WELCOME TO THE CAROLLO FINANCE MAGIC SHOW

Money, especially taxpayers money, has never been far from Joe Carollo's mind or mouth since he's returned to the Miami City Commission, so as part of my review of the annual financial reports of folks at City Hall, I decided to take a look at Carollo's finances to see how he's doing now that he back on a public payroll.

Like his fellow commissioners, Carollo is paid $58,200 plus a car allowance and a cell phone allowance. In addition he has an expense account that he doesn't have to provide receipts for. The true value of that expense account depends on whose keeping the books, because like so much else about the financial operation of the City of Miami, what you think you see, often isn't what you'll actually see once you start digging.

In addition to his commission salary, Carollo also claimed in his recently filed annual financial reports to have a secondary source of income from a consulting company called Consulting Associates Group that he incorporated in 2016.

We don't know for sure how much - if any money he makes from that consulting company - or what consulting services he offers, but it can't be much because in the span of a year, Carollo's latest financial reports show that his estimated net worth dropped by $55,739.80.

Carollo no doubt will leap on that figure as an example of the sacrifice that he's making to be a city commissioner, but since the FORM 1: Statement OF Financial Interests that he and his fellow commissioners provide every year is not subject to any requirements that the information contained be truthful or accurate - these reports are not notarized - nor are they subject to any kind of independent review, the only thing one can say with certainty is, who the fuck knows what any of these people make, other than their $58,200 salary and benefits. (You can look at Carollo's 2017 and 2018 Financial Reports HERE.)

But, even with those limitations, we can make some educated guesses on what his expenses are, and measure those against the information about his salary, and the information that he provided in the City Of Miami Public Disclosure Of Financial Interests which is notarized.

Right off the bat, we know that the taxes on the house that Carollo owns  in the Grove - the one that currently has a total of 5 code violations and a tree violation for hat-racking a big Banyan tree in the front yard - is estimated to be $25,917.26.

We know that, because that's what the County's Property Appraiser's Tax Estimator says. 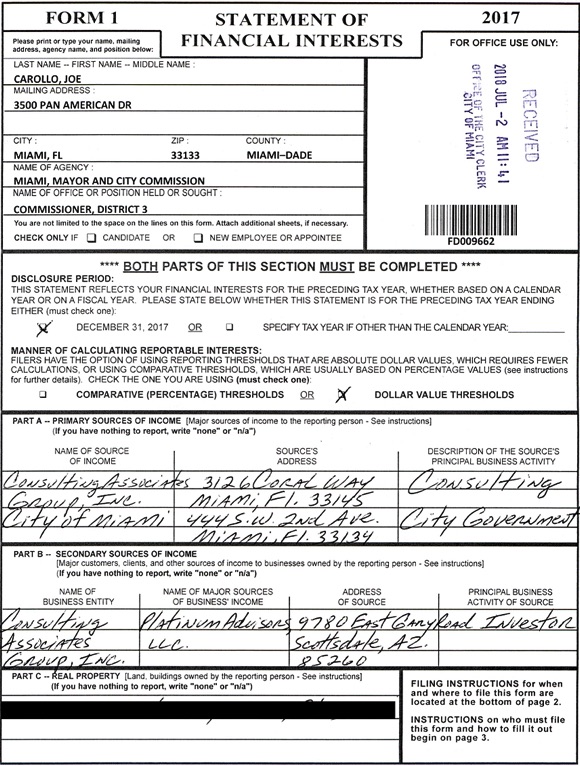 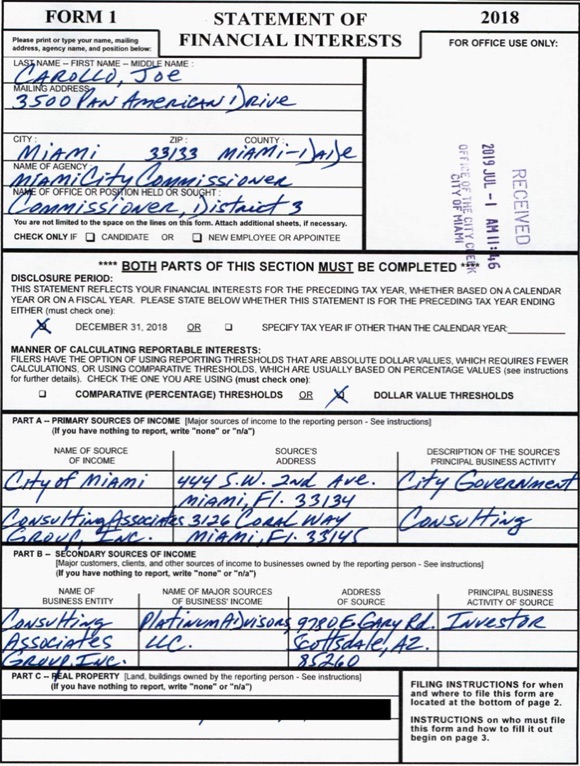 In addition there's the insurance and other expenses required to maintain the house even though no one is living in it.

I won't attempt to estimate these costs because for this exercise we only have to consider that since Carollo doesn't live in the Grove house, but in a rental house in Little Havana - an issue that was a point of contention during and after the campaign because in order to represent District 3 he had to legally live in the District -  the estimated rent on that rental house according to Zillow is $2,995.00, or $35,900.00 a year.

Those two costs alone take him $10,000 beyond his $58,200.00 commission salary, and we've yet to deal with all of the expenses that Carollo and his wife would incur maintaining two houses, and the lifestyle of a city commissioner.

An obvious way to cover those costs would be to have a second source of income, and in both his 2017 and 2018, Carillo claimed in his FORM 1: Statement OF Financial Interests that a company called Consulting Associates Group Inc. was that source of secondary income.

Consulting Associates Group Inc., turns out to be a company that he created in 2016.

Not only did he reveal that this company was his secondary source of income, but he identified the major source of income for that company as an Arizona company named, Platinum Advisors, LLC.

He first did this in his 2017 report, and when I got a copy of that report last year I contacted the company to find out what Carollo had been hired to do that made them his company's primary source of income.

A representative of Platinum Advisors LLC - a development company - told me they had hired him to be the equivalent of their local location representative, because they were considering several possible development deals in South Florida.

The representative then went on to tell me that when they discovered that Carollo was running for the City Commission, they had amicably terminated their relationship.

Since Carollo did work for them in 2017, it was proper that he would list them on his 2017 FORM 1: Statement OF Financial Interests, which he did.

The reason I say this is that after I discovered that he had listed Platinum Advisors LLC in his latest report, I made another call to the company last Tuesday evening and this time I spoke to the owner, James Riggs.

After I explained why I was calling, he confirmed that his company had ended their relationship with Carollo in early 2017, and had not entered into, or engaged him for any reason since then.

In short, Carollo's claim that Platinum Advisors LLC was a major source of income to his company last year now seems to be a lie.

Of course, since there are no requirements that these reports actually need to be truthful, nor is there any review process for these reports once they have been filed. Carollo could have just as easily have claimed that he was hired by the King of Saudi Arabia to go look for oil underneath Miami City Hall.

There are few if any real requirements to be truthful built into a system that was created by crooks to protect other crooks, and overseen by pliant political sock puppets collecting salaries of $200,000 or more, plus benefits, and installed as the overseers of a corrupt system claiming to insure ethical behavior and watchdog oversight to everyone NOT on the Family and Friends Plan.

So, if this Arizona company isn't a major source of income anymore, then who is?

There are a number of time-honored ways that Miami City Commissioners have overcome their personal financial difficulties, or improved their financial condition while in office.

Among the trend setters who set new ways to enrich themselves on the Commission was Armando Lacasa, who the New York Times reported had quadrupled his net worth in the 17 months he was on the commission, and then allegedly told friends that for the first year after he was out of office every time he left the house he expected the FBI to be waiting to arrest him. 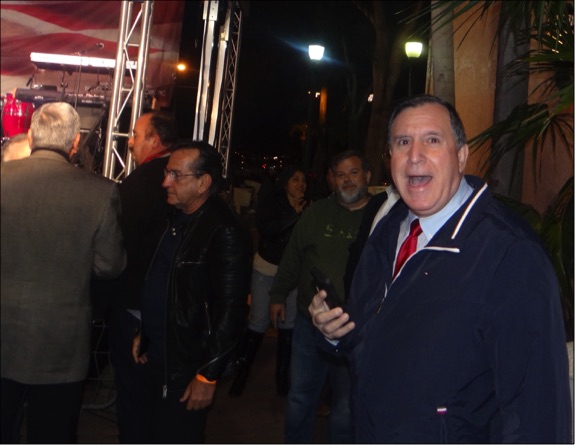 What didn't make any sense was why Carollo would include them on his 2018 FORM 1: Statement OF Financial Interests.

In the years that followed, Armando, his wife and son Carlos Lacasa continued to cash in on Daddy's city connections by acquiring a revocable lease to Bayside Hut, a local seafood restaurant between the Miami Marina and the Miami Marine Stadium on Virginia Key, that only recently closed, but not before the property managed to evade being included as part of the RFP issued by the city for the redevelopment of the Rickenbacker Marina property.

As for what Carollo might get up to in the coming months to deal with his impending financial crunch, one only has to look at the times he's really gone to bat for someone, and you'll see that it's almost always been after  they've given his ECO serious money.

There are any number of ways that politicians have learned to syphon money from ECO's and PAC's and turned it essentially into personal money, as evidenced in Carollo's case by this Miami New Times story in January about the $12,000 he transferred to his sister-in-law's "company" last year from his ECO.

There are a handfull of local politicians who have become notorious for looting their campaign accounts for personal benefit, and it's not hard to do after they find someone willing to launder the money for them.

Carollo has consistently been a "pay for play" guy, whose never been bashful about strong-arming people for money, and on rare occasions, if he's ended up taking money from both sides of an issue he'll just walk off the dais to evade having to cast a vote.

Carollo knows exactly what I'm talking about, because you can always identify the slimeball by how loudly he proclaims his integrity.