I GET MAIL - CITY ATTORNEY VICTORIA MENDEZ TOOK OFFENSE AT MY TELLING HER WHERE SHE COULD STICK A PUBLIC RECORD REQUEST. I HAD TO REMIND HER THAT WHILE SHE BEHAVES LIKE A LAWYER IN A BANANA REPUBLIC, SHE ACTUALLY LIVES IN AMERICA WHERE CITIZENS HAVE A RIGHT TO TALK BACK TO LYING, WEASEL PUBLIC EMPLOYEES WHO LIE AND TRY TO SCREW THE TAXPAYER

I have been more than patient with you for over ten plus years chalking up your outrageous  behavior to old age and senility.   You cannot continue to act in a way that is threatening,  disparaging, and rude to my attorneys and staff and to City directors and their staff and City officials.  And you do not have the right to tell me where to stick things!

You have always been difficult and hostile in e-mail and in person, downright scary even, to all employees and officials in the City.  Now you even started  gesturing the middle finger in a public meeting and causing a disturbance at the commission meeting before last.

I can put up with your behavior  because I pray for you daily. However, it will no longer be tolerated toward my staff and my clients throughout the City.  We have hundreds of emails to prove how horribly you act.  We have your blog and tweets too. We can attach all that to the bar complaint responses, if you wish to continue to spend tax payer money in these unnecessary ways.  We can dedicate extra resources to show how you terrorize employees for public records to write in your pay to play  blog.

We can demonstrate how the City has spent thousands of dollars on catering to your outlandish demands out of fear: new personnel,  trainings, staff time, software, etc.  One of the highest percentage of public record requests comes from you.  You can attach this email to your bar complaint.

Please do not continue to act in a fashion that is even more  threatening, rude, hostile, and gross to others than you have already been doing for more than ten years.  I will continue to ignore the obscenities you say to me or about me, but City officials and City employees should not continue to be subjected to your constant threats and harassment.

Have a great rest of the weekend. I hope you thank the country and government of the United States of America that allows you all the freedoms you have enjoyed up until now,  on this upcoming July 4th.

We are processing your request. We are allowed a reasonable time to do so.

You never disappoint when you write to defend yourself and others against my accusations that your behavior is often beyond the pale when it comes to obeying Florida's public records law.

Having repeatedly failed to intelligently refute my claims, and not only my claims, but the claims of others who have also sued the city and complained vociferously over you, your staff, and various department directors and other officials failure to provide public records for years, now my "behavior" is the result of "old age and senility."

And not only that, but I see you're continuing to make the outrageous claims that I am, "threatening, disparaging, and rude to my attorneys and staff and to City Directors and their staff and City officials. And you do not have the right to tell me where to stick things."

You might choose to ignore my suggestions, but I have an absolute right to tell you where to stick things, because contrary to your misguided opinon, both you and I live in America where the 1st Amendment gives us that right, and where you've chosen to exercise that right by claiming that my behavior is based on "old-age and senility," and that I am constantly, "threatening" city employees and that I publish a "pay for play blog."

None of that is true, and you know it, yet you flagrantly  and repeatedly engage in these efforts to label my efforts to pursue public records as, "difficult and hostile in e-mail and in person, downright scary even, to all employees and officials in the City."

If anyone should be complaining about being mistreated it is me, who was not only barred from entering the MRC building back in the day - which backfired when Channel 6 aired a story revealing what was actually going on - but also let us not forget the BOLO photo of me under the security desk at the MRC building for years,  and the phone alerts that used to go out - and maybe still do - whenever I showed up, not because I was behaving in a threatening manner - because the videos of my visits to the MRC will show that I am greeted warmly by employees - but because you, the Mayor and others kept trying to find out who was providing me with information that was appearing in my stories that made you all look like lying weasels hellbent on screwing the residents of the city at every turn.

You also claim that you have, "hundreds of emails to prove how horribly you (I) act.  We have your blog and tweets too. We can attach all that to the bar complaint responses, if you wish to continue to spend tax payer money in these unnecessary ways.  We can dedicate extra resources to show how you terrorize employees for public records to write in your pay to play blog," and if that wasn't slandeous enough, you claimed, "We can demonstrate how the City has spent thousands of dollars on catering to your outlandish demands out of fear: new personnel,  trainings, staff time, software, etc. One of the highest percentage of public record requests comes from you.  You can attach this email to your bar complaint."

Once again, I see that your decision to ally yourself with Commissioner Carollo had led you to copy his  playbook of insults and attacks, although if I am in any way responsible for efforts to educate the employees of the City of Miami how to respond to public records, I gladly consider that a compliment and something to be proud of, because your personal behavior has been atrocious when it comes to complying with the public records act.

In your litany of my alleged misdeeds, you failed to mention the $22,500 of taxpayer that you had to pay my lawyers in settlements because of the comments that you had made to me that prompted those lawsuits.

Remember when you told me that there were no electronic files maintained by the Protocol Office, and then one of your Assistant City Attorney's had to show up in court with a CD of those non-existent files?

Remember when you lied to me about there being no accessible electronic files of the email addresses for both the DDA and Commissioner Sarnoff and then your office turned those same non-accessible files over to my attorney as part of the settlement?

You didn't settle my lawsuits because I had a weak case, you settled because we were going to clean your clock in court and set a legal precedent that would have created a real embarrassment for you.

In addition, if you go to NextRequest and type in my name - "al crespo" and "al crespo ULTRA" - you will see that I have filed a total of 65 separate public records requests. Those 65 are 1.3% of the 6096 public record requests logged on NextRequest since 2015.

My public record requests are not the "hundreds" that you claim.

The reason why you might think I've made "hundreds" of public record requests is not that I have, but rather because I'm constantly having TO REPEAT the requests I do make because you, your staff and some employees in the city treat public records as if the documents were either their own personal property, or because the documents that I am asking for would prove to show that they and/or their bosses are incompetent or deviously out to screw the residents of the city.

Furthermore, you mention my giving the Commissioner the finger at a prior meeting, but you failed to mention the verbal abuse and names that the Commissioner called me at that meeting including his claim that a person like me should not even be allowed to attend a public meeting.

In fact, it's interesting that you would choose to attack me for not treating city employees with the sensibilities one reserves for snowflakes, but yet you, the City Manager, the Mayor, and the members of the City Commission are such cowards that when Carollo attacks city employees none of you have demonstrated the courage to stand up in defense of those city employees.

In addition, if I gave Carollo the finger - and this is not an admission that I did so - giving someone the finger in a public meeting is an expression of the 1st Amendment, much like sticking your hands in the air and waving to show support for an item.

I'll bet that a review of the record of City Commission meetings from the past will show that when Commissioners made verbal attacks on the Castro brothers or communism in Cuba, there were some in the audience who erupted in cheers and gave the Castro's the finger. Only back then, and even now, giving the finger anywhere in the City of Miami is considered the Cuban exile salute!

There is a very simple way to end all of this Victoria, and one that works quite easily.

When I ask for a public record, tell your employees to obey the law that gives them a "reasonable limited time" to retrieve the document, review it for exemption, if any - and 99.9% of the documents that I ask for do not contain information that would fall under a legal exemption - and  give me the damn document, period!

Of course that also means that some of the city's elected officials and employees would have to quit trying to screw the taxpayers, because if they weren't doing that I wouldn't be asking for public records to begin with, but that not my part of my mandate.

I just write about the screwing the taxpayers get, in no small part because of your willingness to abuse the law so as to keep collecting that $225,000 in salary, plus benefits that you get every year for being a shill for the likes of a vicious, vindictive, corrupt politician like Joe Carollo while attempting pass yourself off as a respectable attorney. 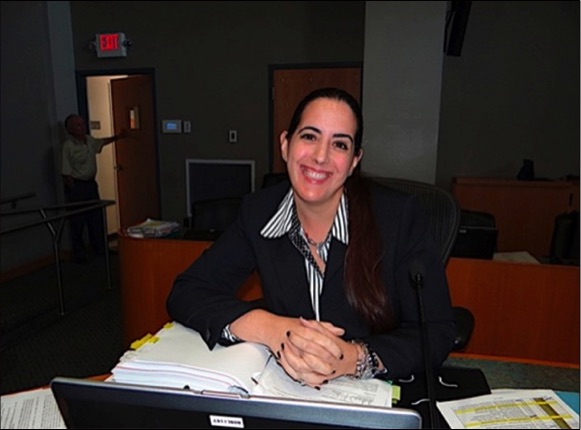 PHOTOS OF THE DAY - A TALE OF TWO CITIES: MIAMI MAYOR GIVES A KEY TO THE CITY TO JANE CASTOR THE NEWLY ELECTED MAYOR OF TAMPA 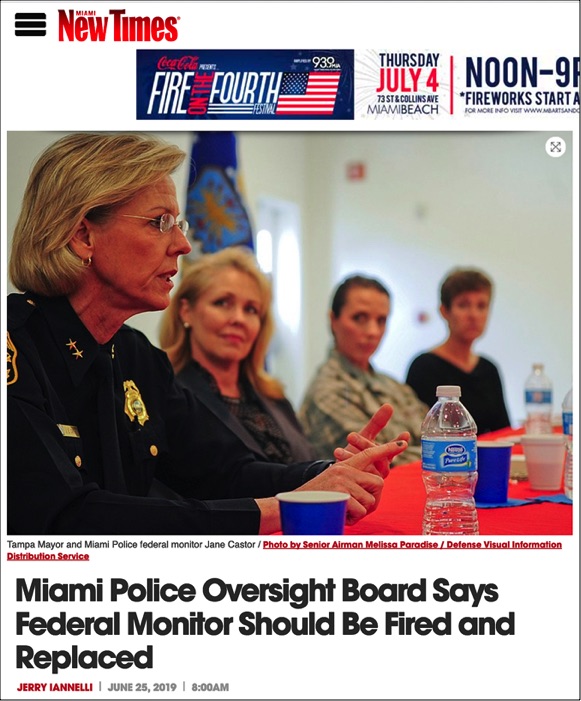 Every so often I know that I've gotten under City Attorney Victoria Mendez's skin because I get an entertaining email from her.

So it was yesterday, when I got an email response to the email that I had included at the end of my story last Friday.

I figured this one was good enough to share, so here is what she wrote me, and below that is my response.