In Miami, municipal governance is often accomplished as a result of ignoring the rules, rather than by following the rules.

Take for instance the painting of the Puerto Rican flag on a building in the MIMO Historic District on Biscayne Boulevard.

Few residents in the district were initially upset with the news that a new restaurant was moving in to take the place of Balans restaurant which had been located in the building previously, and which had over several years declined in business.

The prevailing opinion was that Balans had failed in part because the businesses and buildings around it were vacant or in decline and that those problems dragged Balans down with them.

Another opinion, expressed by local activist Elvis Cruz was that Balans' problem was operating a 200 seat restaurant with 23 parking spaces, and that the lack of parking, and not the quality of the food or the condition of the neighboring buildings and businesses was probably was a major reason they ended up closing.

The love affair with La Placita, the new restaurant that replaced Balans  was short-lived however, after a lot of the folks in the neighborhood became upset on learning that the restaurant owners were painting a Puerto Rican flag across the face of the building on December 27th of last year.

MIMO's Historic District has generated a lot of opinions, both for and against over the years, but overall, folks in the area came to accept the restrictions that come with a historic district, and a lot of time, effort and money has been spent by businesses and residents to make the district into something that they could all live with, and support.

Consequently, when phone calls started being made on the morning of December 27th that a giant Puerto Rican flag was being painted on the building, folks became upset, and after some of these folks made calls to code enforcement, an inspector came out and informed the owners that a Certificate Of Appropriateness was required for them to do what they were doing. 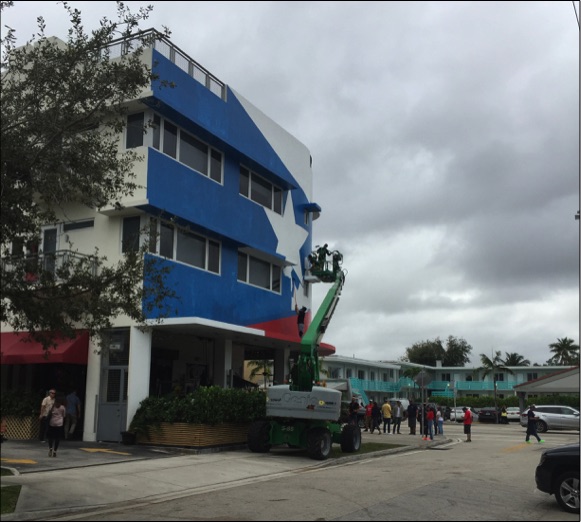 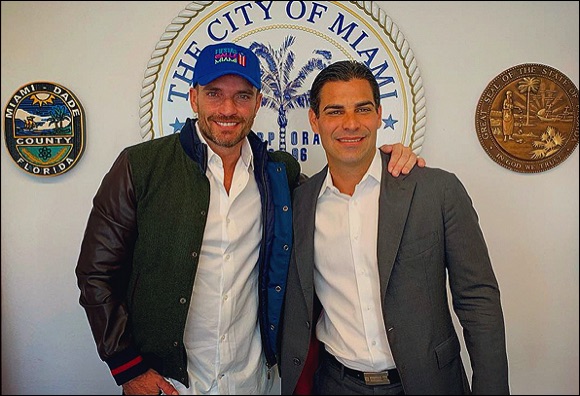 The folks in the MIMO Historic District are a feisty group of residents who seldom take no for an answer - I know, having had my own run-in's with them back in the day - and after the flag was painted on the building, and before the Historic Preservation Board held their hearing some of them managed to have a meeting with Colonel Klink, AKA City Manager Emilio Gonzalez, about a number of issues including the lack of a Certificate of Appropriateness, parking problems in the neighborhood, noise problems and the fact that he had shown up a couple weeks after the flag was painted on the wall to have supper at the restaurant, and followed up by posting the equivalent of a restaurant review on Twitter.

The Klinker allegedly claimed that the Mayor was a supporter of the restaurant, so essentially it didn't matter whether this group had secured a Certificate of Appropriateness before painting the flag on the building, and he could eat wherever he wanted, including restaurants in the city operating with open Code Violations.

The Klinker has turned out to be such a dick, what with his constant need to pose for selfies like some vapid teenage girl addicted to Twitter, along with an all-around lack of respect for city employees  - especially women who he refuses to be photographed with while "Team Building" at restaurants on the taxpayer's dime - that his showing up to eat at a restaurant cited for a major violation of the city's historic preservation laws is just one more in a growing list of examples of his lack of respect and concern for the quality of life of the residents who are paying him $265,000 plus benefits to be the city manager.

Boy-Toy Mayor Francis Suarez has also shown a proclivity for posing for Twitter photos, such as this photo with Argentinian actor and Puerto Rican resident Julian Gil. 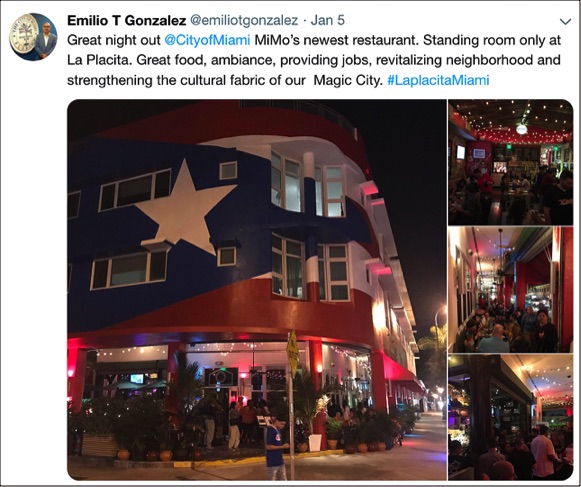 Complicating the issue was the arrival during the painting of the building of Miami's Boy-Toy Mayor Francis Suarez with Sneakers The Bodyguard - see photo above - and when confronted by angry residents about the illegal activity, allegedly shrugged his shoulders and told them there was nothing he could do because he didn't have any control over code enforcement.

He then went on, from all accounts to hug and play kissy face with the restaurant owners and their friends, ignoring the anger of the residents who felt that his response was unacceptable.

The narrative of what happened that day - sanitized of any mention of the Mayor's presence - was part of a report prepared by the city's Office of Historic Preservation and presented to the Historic Preservation Board on March 5th in response to an appeal of Notice Of Violation by the restaurant owners - and not the building owners - to seek a Special After-The-Fact Permit that would allow the flag to remain on the building. 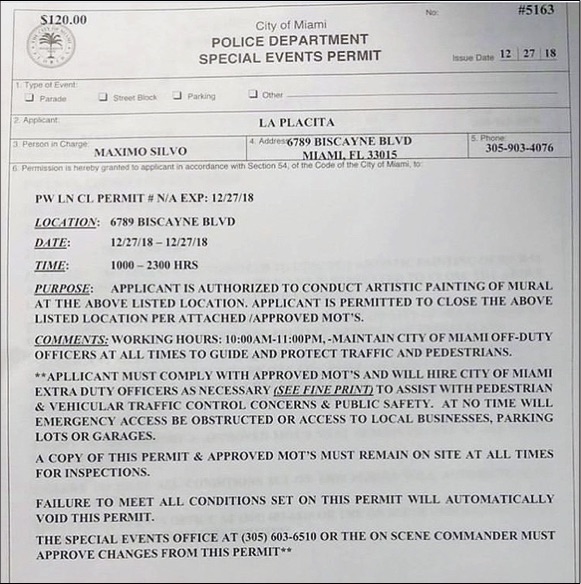 WHAT IF SOMEONE WERE TO TELL YOU: 'WHAT YOU HAVE HERE IS A VERY BIG LOOP HOLE, A LOOP HOLE, THAT THANKS TO US, YOU NOW KNOW ABOUT AND CAN CLOSE, AFTER YOU GIVE US AN EXEMPTION THAT LETS US BENEFIT FROM THIS LOOP HOLE.' YES, IT'S ANOTHER ONLY IN MIAMI STORY

Late on the night of March 5th, the Historic Preservation Board heard the appeal of La Placita concerning their failure to obtain a Certificate Of Appropriateness before painting the flag on the building. (You can see the entire one hour and twenty three minute meeting at the bottom of this story.)

The restaurant's defense of their actions was made by Joey Cancel, the CEO of the company that operates the restaurant, and in the course of the hearing he repeatedly claimed that they were not at fault because "the city" had given them the run around as to who to see, and who to get permission from in order to get the proper permits to pain the building.

Although you would have thought that since the restaurant was just one of a number of tenants in the building, that the building's owner should have been the one defending the paint job, but both Cancel, and the attorney for the building owner claimed that when the restaurant owners informed his client of their desire to paint the building he gave them his blessing as long as they got the required permits.

Both Cancel and the building owner's attorney also claimed that in this conversation, the owner never went beyond simply instructing them to get the proper permits by also informing them that the building was part of the MIMO Historic Preservation District.

This was a curious omission given that a former president of the MIMO Historic Preservation Group stated at the hearing that he had met with the owner numerous times before the building was built in order for the design of the building to accomodate their concerns.

Assistant City Attorney Rafael Suarez-Rivas also revealed at one point   that the building owner had on several occasions had to come before the Historic Preservation Board himself, which makes it even more curious why he would not have bothered to inform his tenant what getting a permit might entail.

More troubling was the insistence by Cancel that they had not only done everything that they could to follow the law, but that they had hired a permit expeditor to actually handle the process, and at one point in his presentation he named Carlos Garcia, from the Zoning Department as the person who had supposedly given their expeditor the run around.

Besides the photo, Gil was also the beneficiary of a $20,000 grant - aka gift - from the city to his production company to help underwrite this year's Fiestas de la Calle in Wynwood.

After watching the video of the hearing, I sent an email to Joseph Ruiz the Zoning Director, to inquire if anyone named Carlos Garcia in Zoning handling permits?

Here is that exchange. 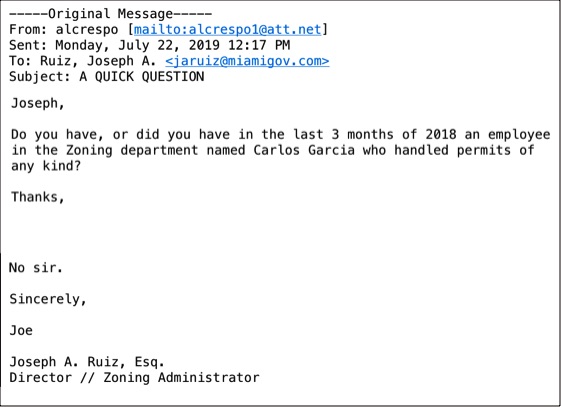 I would be curious to know who this so-called expeditor was, because clearly anyone claiming to have enough knowledge of the workings of the City of Miami to charge money to for their services and then allegedly giving a name of a non-existent employee of the Zoning Department as the reason for their his/her failure to aquire the necessary permits is someone that needs to be exposed.

But, as interesting as all of this was, the real pièce de ré·sis·tance was when Joey Cancel declared that the members of the Historic Preservation Board should really thank him for revealing the loophole that he and his partners had managed to use - the bogus Special Event Permit issued by the police department - to paint the building, and that as a thank you, the board should give him the After-The-Fact Permit, and then do whatever they needed to do so that no one else could pull a stunt like this again.

Only the video does this justice, and it also includes some other information that's worth watching and listening to.

It's hard to believe that even as incompetent as the city can seem to operate at times that no one, starting with the building owner, the expeditor, whoever in the Zoning Department actually reviewed the request for a permit, or the Special Events Office of the police department all failed to know or understand that this building was in the MIMO Historic District, and that no one could just up and paint a giant flag on the side of a building in the district with only a permit from the police department that allowed the traffic to be rerouted to accomodate the mechanical lift used by the painters.

The painting of this flag was first and foremost an insider's politcal deal, from the mayor showing up during the painting of the flag, to Colonel Klink dropping in for supper after a Notice of Violation had been served, to the photo of Francis Suarez and Julian Gil, along with the $20,000 gift for the Puerto Rican Day Festival in Wynwood.

The big question is what will the city commission do on Thursday?

If it had been a British Flag, or a Jamaican Flag, or a South African Flag, or the flag of a 100 other countries on earth being painted on the wall of the building this would never have reach this point.

The painting of those flags would have been halted immediately when the Code Enforcement officer showed up on December 27th.

For those who still cling to some belief that the City of Miami is capable of behaving as a legal entity and not as a loosely organized criminal enterprise where ethnicity and political connections matter more than the law, how this gets resolved will tell you a lot about the city, and it's future.

HERE'S THE VIDEO OF THE FULL HEARING