XAVIER SUAREZ CALLED ME OVER THE WEEKEND TO COMPLAIN ABOUT A TWEET I WROTE ACCUSING HIM AND HIS BOY-TOY MAYOR OF MIAMI SON OF FAILING TO FILE TRUTHFUL FINANCIAL REPORTS. SINCE HE WANTED TO MAKE AN ISSUE OF IT, I AM HAPPY TO ACCOMODATE HIM

Two weeks ago I did a series of stories about the annual financial reports that public officials in Florida are required to file with either the Florida Ethics Commission, the County Clerk of Court, or in the case of the City of Miami, the City Clerk.

I've done these kinds of stories a number of times over the last 10 years and nothing ever seems to change for the better. The politicians either lie, ignore or mis-state the information that they should provide in these reports.

Since there are no requirements that these reports either be reviewed for accuracy, or penalties imposed if the politicians have withheld information or lied, the odds of discovering what the real financial situation of most of South Florida's elected officials is about as likely as discovering a winning Powerball ticket stuck on the windshield of your car after a rain storm.

When it came to my stories about Xavier and Francis' financial reports this year - you can go read them here if you haven't already - XAVIER, FRANCIS - I traveled over familiar territory raising questions about where and how Francis was able to cover the $309,000 down payment and 6 figure mortgage on his new house in Coconut Grove, plus the mortgages on another house and condo on a salary of $97,000, plus an unknown payment from the Greenspoon Marder law firm where he's settled in, "as counsel."

In this case, I would contend that "of counsel," is another way to describe him as being a Christmas Tree ornament that the partners dangle in front of prospective new clients to demonstrate that the law firm has the Mayor of Miami in their pocket.

What prompted me to go look at Xavier's financial reports this year was the claim that Francis made in his report that Daddy X had loaned him $40,000.

Why, I wondered would the Mayor of Miami need to borrow $40,000 from Daddy, and equally important, does Daddy X have the money to lend Junior $40,000?

Xavier's latest financial report revealed that since 2016 he's basically copy/pasted the same information on the annual report - a not unusual occurrence among local elected officials - and in looking at all of the reports filed by both city and county officials it was evident that many of them went out of their way to provide as little information as possible.

The glaring example that proves this point is the financial report that County Commissioner Estaban Bovo filed, which, by far was the most comprehensive and actually informative report of all the reports I looked at. 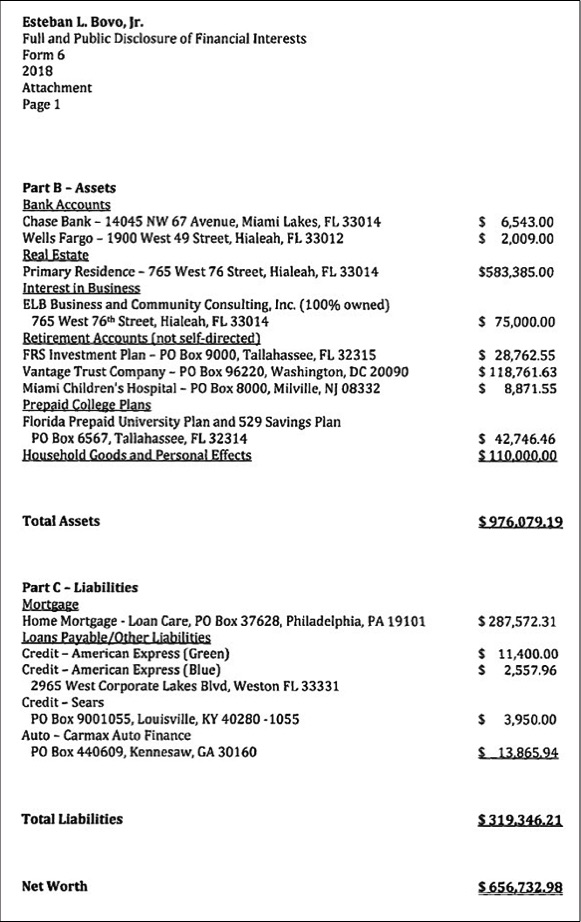 Compare this to Xavier Suarez's report below.

For starters, Xavier failed to provide any information on the amount of money he has in a checking  account, something that even his son did - $15,792.19 in City National Bank - which holds the mortgage to his house in the Grove.

Xavier also failed to provide any information on the value of, "Household Goods and Personal Effects," which can be substantial, as evidenced not only by Bovo's report, but by other reports as well.

One issue that I did not write about at the time I posted my story was brought to my attention by Crespogram reader who pointed out that  Xavier's claim that he owned condos at both 2625 and 2555 Collins Avenue was not possible, because someone else owned the condo at 2625 Collins Avenue. 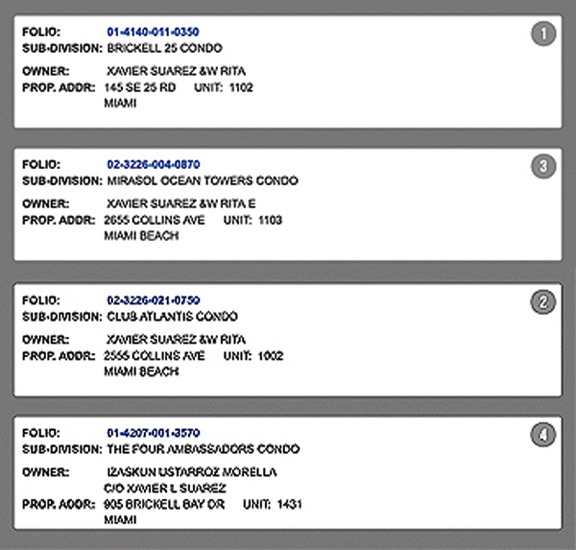 While I check a lot of my information it seems that I had unfortunately relied on Xavier being factually correct in listing the addresses of the properties that he and his wife owned, and after I was tipped off to the error and my own search was I able verify that Suarez had not included the correct addresses.

Here are the listing and correct addresses of the three properties that Xavier and his wife own in Miami-Dade County.

He is after all an elected official who oversees a MULTI-BILLION DOLLAR county budget, and paying attention to, and remembering what the actual budget numbers are  is a critical part of the job!

My biggest problem, and one that I think concerns a lot of other people as well is not what is in these annual financial reports, but what isn't in them. It's foolish in South Florida to believe that elected officials can be trusted to tell the public the truth about anything, starting with their personal finances.

That is why the  problems that I have with Xavier and Francis Suarez behavior as public officials starts with their failure of demonstrating transparency and factual accountability in their annual financial reports such as where did Francis Suarez get the $309,000 for the down payment for his new house in Coconut Grove, and then ping-pongs to a list of  other questions dealing with how much money he raised for both his campaign for Mayor - $2,602,700.29 - and the amount he raised and spent through two PAC's for his campaign for strong Mayor the following year - $3,272,859.66 - which are both tied to the question of what kind of  Return On Investment did some of those donors expect when they gave him $5,000, $10,000, $15,000, $25,000 and $50,000, and are they now receiving that ROI?

With Xavier, I'm interested in a lot of the donations that he's received to Imagine Miami, PAC, and why Francis got a campaign contribution from the family who is going to build the American Dream Mega Mall, which has nothing to do with Miami or it's Mayor, but did require a vote from Xavier and his fellow county commissioners.

I'm also really interested in the connection between Xavier, Francis and Mike Eidson and his law firm Colson Hicks Eidson and the tens of thousands of dollars that have gone into the Suarez campaign accounts.

In addition, I'm intrigued by a New York company that I discovered gave Xavier money for hs PAC, and whose president's history will make a lot of you say, What The Fuck!?!

And then of course, wherever you finds the Suarez's you'll also find Steve Marin.

For more information on those and other questions and revelations, come back for PART TWO which will hopefully be ready tomorrow. 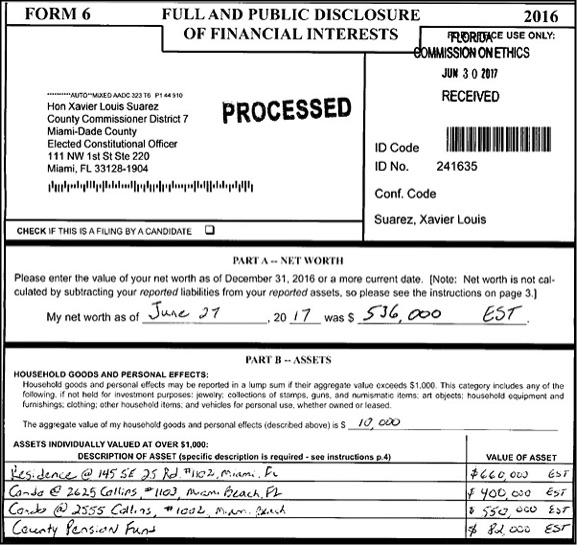 In and of itself, this is a scrivener's' error, and would not be worth mentioning except as a tip to correct the form, were it not that Suarez has  been filling out these reports with the same addresses since at least 2016.