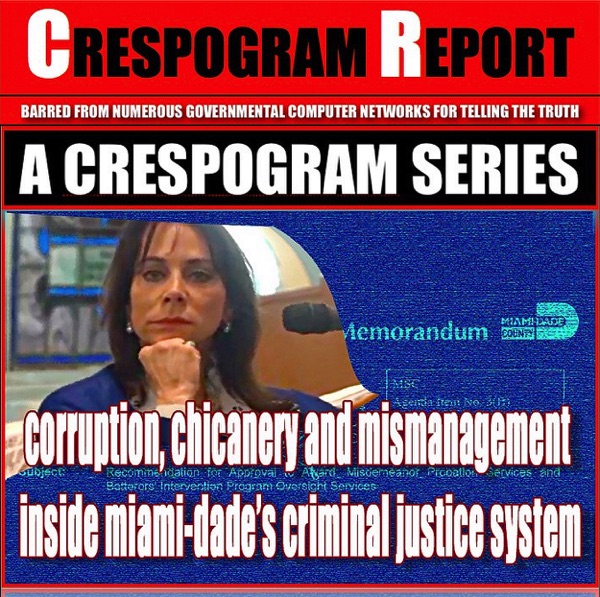 Over the years I've written this blog I've tackled a lot of issues that no one else would, and some of those issues required my writing multiple stories which turned into series.

None was more important, or took so much of my time as the 5 Part series below that I first published in early 2016.

The basis for the story were almost 8,000 pages of documents, and first hand accounts of some of the activities that I described revealing the way in which Miami-Dade State Attorney Katherine Fernandez-Rundle had used the county's two pre-trial diversion programs to "extort" money from unsuspecting defendants who were required to make "donations" to these programs.

This money was in turn funneled to The Denise Moon Fund, a donor assisted foundation created and controlled by Fernandez-Rundle within the Miami Foundation.

The whole issue of donor assisted "foundations" and how they have been used by politicians in Miami including Michelle Spence-Jones, Marc Sarnoff and his wife Teresa to collect money from campaign donors before they in turn gave this money away to embellish their images is a whole other story which I wrote about back in the day, and which I suspect might be worth revisiting some day soon.

In the meantime, when I say that Fernandez-Rundle "extorted" this money - and at the time it was millions that has been collected - I mean that in the criminal use of the word, "extort."

She neither had the statutory or legal right to do what she did, and numerous lawyers - both locally and across the country - and a handful of law professors on reading my series agreed with my conclusions.

The series caused real consternation when I published it, because in addition to Fernandez-Rundle's behavior, a number of county court judges were party to, and played a part in this scheme, and as you will see in Part III, a retired judge played a central part in trying to stack the deck to insure that the county's procurement process was used to make sure that the programs that were in the deal flow, remained in the deal flow.

In 11 years, this series, along with my series about the 11 revolvers that were taken out of the Miami Police Department's Property Room are the two stories that I am most proud of, not only because of the time and effort that I put into them, but because they provided a window into a level of insider dealing and corruption that unfortunately goes on in Miami-Dade County on an almost daily basis, and all but remains unreported by what passes for the local media.

No one, nor any local media outlet has ever written a word about the revelations that I documented in this series, and even though a number of lawyers and law professors agreed with my allegation that what Katherine Fernandez-Rundle had done was clearly illegal, the judges in the 11th Circuit Court refused to consider what my story meant for the equal and fair administration of justice, because at the very least some of them were complicit in the process.

In short, this was another Crespogram example of telling the kings and queens that they were not only running around naked, but they had used toilet paper stuck to their asses.

In just a few more weeks Katherine Fernandez-Rundle will be coming up for reelection, and while I have little hope in seeing the recent protests over all the bad things that she has been justifiably accused of doing while she's been in office translate into votes to take her out of office, I figure that this July 4th weekend is a good time to repost these stories for those who might be interested in seeing how the chief law enforcement officer in the county used her office to extort money to finance a private foundation that she controlled.

The stories below are in a PDF format. It's too complicated and maddening a series of events that resulted in the on-line versions no longer being available, and one day when I win the lottery I'll hire some 17 year old kid to spend the time it takes to reconstruct all of my stories onto a private server for posterity, but until then, it is, what it is.