PHOTO OF THE DAY - AFTER A HARD WEEK OF SELF-PROMOTION IN WASHINGTON, D.C., COLONEL KLINK COULDN'T WAIT TO GET BACK TO MIAMI SO HE COULD HAVE LUNCH WITH THE "TEAM"

As I pointed out two weeks ago, the Klinker doesn't like to eat in public with female city employees.

Nickolas Pascual, who is The Klinker's Director of Government Relations decided to go out of his way to make sure that all the female employees in the city got that message loud and clear by writing, "Fantastic lunch today with the @CityofMiami team."

Yes, women work for the city, but clearly, they are severely limited when they are denied being part of the inter-action that occurs during informal lunches and dinners where real decision-making often occurs. When a guy like the Colonel, demonstrates in photo after photo that he does not invite or include women when he takes the "team" out to lunch and dinner, that is sexist behavior on display.

This is just one more example of how quickly the city has gone to shit under Francis Suarez and Colonel Klink. 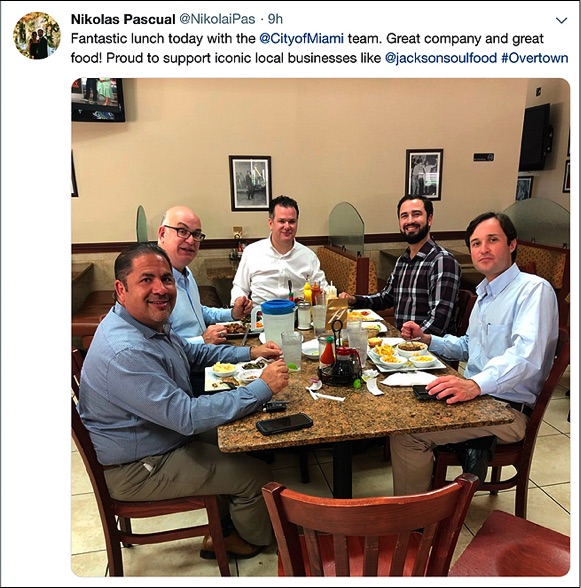