Take for instance Christian Ulvert, who in addition to being Daniela Levine-Cava's campaign manager for county mayor,  also seems to be managing the reelection campaign of Miami-Dade State Attorney Katherine Fernandez-Rundle

Ulvert was recently rumored to be involved in the decision to threaten filmmaker Billy Corden with arrest over the campaign video he released attacking Katherine Fernandez-Rundle for her handling of the Darren Rainey death by scalding in a locked shower in a south Florida prison, which if true, becomes another example of the stupid things Ulvert has suggested that his clients do over the years.

As a sidebar to this story, Elaine Del Valle this morning posted a story that mentions Ulvert and a separate set of shenanigans that she alleges he's involved in with Daniela Levine-Cava's campaign which he's also managing.

Then there's local defense attorney Ben Kuehne, who after helping Al Gore lose Florida moved on to a career of representing corrupt politicians with access to taxpayer money to pay for their defense.

A lot of people might wonder what a criminal defense lawyer would be doing involved in providing legal services for a PAC created to raise money for a corrupt State Attorney like Katherine Fernandez-Rundle, but then again what better friend can a defense attorney have than a corrupt stata attorney.

Add Robert Hertzberg, husband of realtor Jill Hertzberg and Fernandez-Rundle gal pal, and CPA Loretta Fabricant, and what you end up with is a PAC called, Citizens For Justice PC.

WHAT DO YOU GET WHEN YOU PUT A SLEAZY POLITICAL OPERATIVE, A CORRUPT STATE ATTORNEY AND A CRIMINAL DEFENSE ATTORNEY WHO SPECIALIZES IN DEFENDING CROOKED POLITICIANS TOGETHER

While part of that answer will have to wait until we see what happens after the election, one part is clearly visibile now, and that part indicates that contrary to the election laws it would seem that the campaign and the PAC have been engaging in ex parte communication.

A review of the 2020 expenses for Fernandez-Rundle's campaign account shows that she's made minimal payments to her campaign manager Ulvert through his political consulting company Edge Communications, and Peter J. Campbell, her campaign treasurer.

Although the PAC was formed back in 2016, it really wasn't needed then because Fernandez-Rundle had no opposition to her reelection that year, so it laid moribund until this year when some of Rundle's deep pocket pals started donating big bucks to help keep the KFR Family and Friends Protection Plan in place. To date, they've donated $133,500. Here are the donors.

If there was any requirements for honesty in the naming of PAC's, this PAC should be called CITIZENS FOR JUST US. 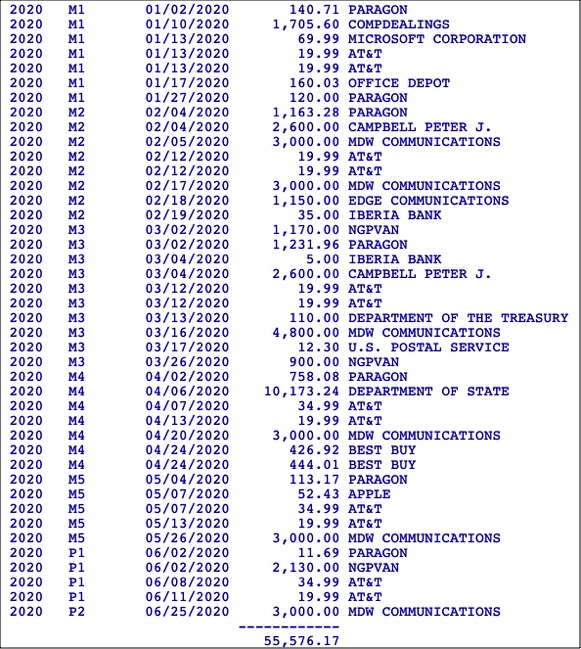 Ulvert is an officer of the PAC, and is also the campaign manager for the candidate, and the biggest payments made from the PAC are to him.

That's a pretty sweet deal, and also pretty incestuous, which raises the obvious question of coordination.