ONCE AGAIN THE REGALADO'S, MIAMI'S PREMIERE FAMILY OF GRIFTERS IS IN THE NEWS AS A RESULT OF ACCUSATIONS OF A MANUFACTURED "FAKE NEWS STORY"

Once again, the Regalado grifters are in the news.

Last Wednesday, on the the day before the 4th of July, a news blog called CiberCuba published an explosive story alleging that Tomas Regalado Jr., a reporter and news anchor for TV Marti, where his father, former Miami Mayor, Tomas Regalado landed as the Managing Director after he left city hall, had been removed from the building and put on administrative leave for allegedly - with the help of his cameraman - manufactured a "fake news story" showing him narrowly being missed by a missile fired by a handmade rocket launcher in Nicaragua in 2018.

Putting aside the rank nepotism of Tommy Jr. being hired to work at TV Marti after Daddy became the Managing Director, the various stories that have come out of that propaganda agency since Tomas Regalado has been running it are proof, if proof was needed, that these people are the worst kind of political opportunists.

Below is a Google English translation of the CiberCuba story about this incident and Regalado's physical removal from the premises last week.

It's just another day in It's Miami, Bitches!

A video published on the afternoon of Monday by the presenter Alexander Otaola, and that also received the writing of CiberCuba through an anonymous communication, questions the veracity of a report published by the journalist Tomás N. Regalado in the television news services of Martí the crisis in Nicaragua in 2018.

The material lasts barely 29 seconds and sows doubts about the authenticity of what the journalist showed. In this, the process of preparing something that looks like a small homemade projectile at the hands of three teenagers on a street in Nicaragua is shown. Two of the young men are hooded, the third is not. It is seen when they give directions to the one who is going to shoot where to do it, and seconds later the small device falls behind the journalist of TV Martí, who then walks to the same address where the young people are.

The video has no editing cuts so you can see the derisory distance between the alleged rebels and the reporter and his cameraman: just a handful of meters, and front. From there, he questions the version offered by Regalado in his report broadcast on June 27, 2018 in "Antena Live", by TV Martí, and repeated on his Facebook wall where he states that the image was taken after that a mortar projectile, launched by insurgents, will hit you very close.

"Speaking in Cuban silver, this has no other name than montage and nerve," said Alexander Otaola after broadcasting the film more than once during his program.

Tomás N. Regalado is the son of the current director of the Office of Transmissions to Cuba, Tomás Regalado, who took office just one year ago. According to two former employees of Radio Martí, CiberCuba confirmed that the coverage in Nicaragua was inexplicably denied to Isabel Cuervo, a journalist who until now covered the subject, and was entrusted to Tomás N. Regalado.

This coverage of Radio and TV Martí in Nicaragua was part of the professional merits taken into account to deliver to the team made up of journalist Tomás N. Regalado and cameraman Rodolfo Hernández various national and international awards. Cameraman Rodolfo Hernández received the "David Burke Awards", granted by the Global Press Agency of the United States, and both obtained the "Award of Excellence" from the Integrated Community of Central America and Mexico (CICAMEX) for the coverage of Nicaragua.

During the delivery of the "David Burke", the director Tomás Regalado pointed out that Radio and TV Martí were the only sources of information that Cubans on the island had about the crisis in Nicaragua, because the official Cuban press remained for ten days in silence about these revolts.

"In the first place, it is a lie that we were informed through Radio or Television Martí," opposition activist Carlos Jesús Reyna, based in Bayamo, in eastern Cuba, told CiberCuba. "Long ago we used everything that comes to us from you, in CiberCuba, from the same Otaola, or the selections that come in The Package of the Miami television programs. But if it had been, go information that TV Martí sent us. Here we saw it yesterday in Hello Ota-Ola ".

CiberCuba communicated this morning with Tomás N. Regalado to know his answer or his comments on this serious complaint of making a news, or at least the setting of a specific scenario. The reporter sent us Eric Durán, assistant director of the OCB, who up to this moment has not answered calls or messages from CiberCuba.

The complaint comes a month and a half after an investigation prepared by the United States Global Press Agency (USAGM) concluded that both radio and television stations broadcast information and research "plagued by bad journalism" and "ineffective propaganda" towards the island.

The agency, formerly known as the Broadcasting Board of Governors, is the federal agency that includes five chains of information broadcasting: La Voz de las Americas, Radio Free Europe, Radio Free Asia, Transmissions to the Middle East and Transmissions to Cuba. Radio and Television Martí belong to the latter.

After this report, the director Regalado made several dismissals and the Global News Agency of the United States ordered training courses for personnel working in content writing towards Cuba.

The allegations of irregularities, favoritism, nepotism, and political agendas distant from the function defined for a federal entity such as the Office of Transmissions to Cuba reached a level of great concern with the circulation of an anonymous report, with an impressive level of detail, where account of all this.

Among the complaints included in this report, was the production of news such as the one that is now in juic 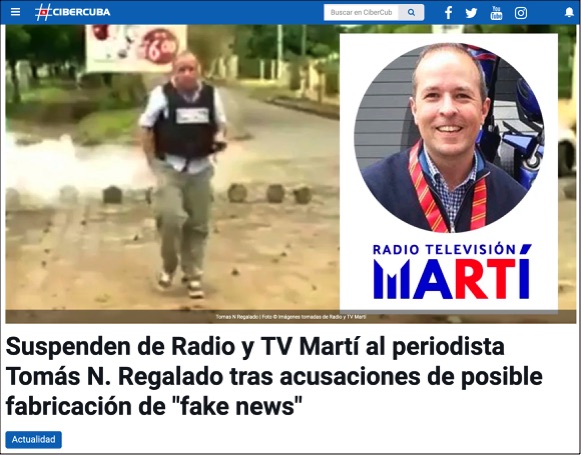