THE CHIEF OF POLICE USED THE "N" WORD 23 YEARS AGO. HE'S DONE A LOT WORSE SINCE THEN, YET NOBODY IN THE LOCAL NEWS MEDIA WANTS TO REPORT ON ANY OF THAT BECAUSE IT DOESN'T FIT INTO THE SANITIZED POLITICAL NARRATIVE THAT MIAMI'S MAYOR AND THE CHIEF HAVE BEEN FEEDING THEM LIKE SUGARED PABLUM TO A  BABY TO PUT THEM TO SLEEP

Yesterday the Miami Herald, the Miami New Times, as well as all of the local TV stations made a big deal about the allegations made by the leadership of the Miami Community Police Benevolent Association, AKA The Black Police Union, about a reprimand that the Chief received in 1997 for comments about "N---town" he made to a class of new officers when he was a Training Officer.

The Chief was quick to respond by claiming that his use of that phrase and others was as a reference to the kind of language that the recruits could expect to use and hear on the streets if they worked undercover.

In a video that he issued in response to the release of a copy of the Internal Affairs Department Of Disciplinary Review by the Miami New Times - (See the video at the bottom of this story) - the Chief also made it a point to claim that no one actually filed a complaint about his comments, which raises the question that if no one complained, how did what he said manage to trigger a full blown investigation by Internal Affairs and lead to a reprimand that was signed off by 5 separate members of the command staff including the Chief, and why if it was no big thing, did Colina at the bottom of the document refuse to accept the findings. 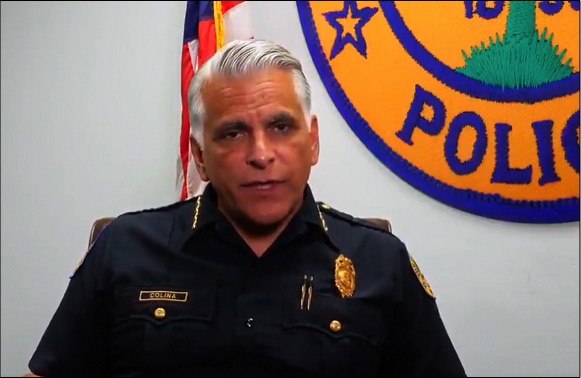 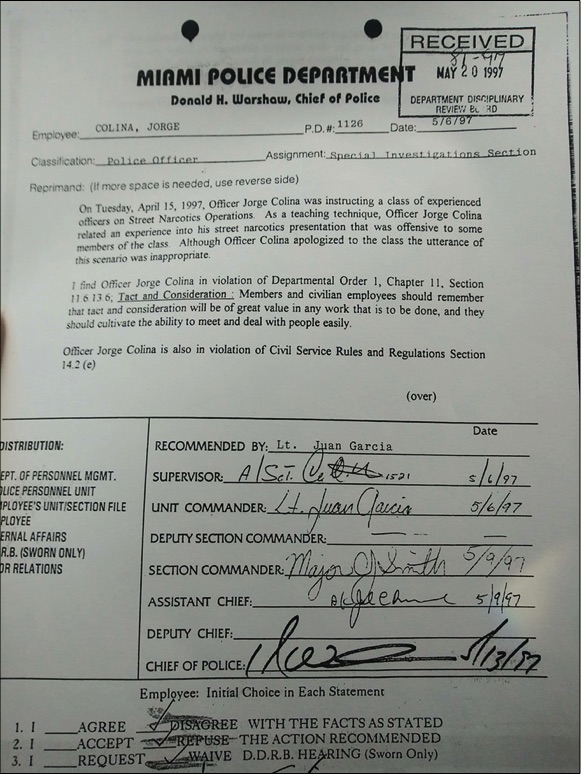 In short, this was a more serious issue than the Chief is now claiming that it was because if, as disgraced former Police Chief Donald Warshaw is now claiming in his support of Colina that this was a very minor issue it never would have reached the level of a formal investigation and an official reprimand.

But, all of that happened 23 years ago, and the issues of how the Chief is comporting himself today are far more serious, with far larger consequences than the use of racial slurs when he was just a regular police officer.

THE CHIEF AND THE CIVILIAN INVESTIGATIVE PANEL

The issue of civilian investigative panels has become a big issue around the country and especially in Miami-Dade County where several years ago the county commission passed as ordinance to create a civilian review panel and county mayor Carlos Gimenez vetoed it.

On June 4th, I posted a story about Chief Colina in response to his and the Mayor's claims that they were doing such a great job of handling the initial round of protests in the aftermath of the murder of George Floyd, that Miami should be considered a model for other cities in the country to follow.

Among the issues that I raised was the story of Lanora Graves a Black woman with a 5 year old daughter who last year was living in the heart of the worst part of Overtown in a 2 story apartment building where she alleged that drugs were being sold out of the apartment next door.

Like a good citizen and a mother trying to protect her daughter, she reported the sale of drugs to the police.

In my story I included a portion of the investigation report prepared by the City of Miami's CIP that detailed how the cops, after supposedly staking out the building, got a search warrant for her apartment and not the one next door that she claimed the drugs were being sold, and after breaking in to her apartment and terrorizing her and her daughter, found no drugs, and and basically told her, 'Never mind.'.

In addition, while Colina claimed in the video that he released to the staff of the police department and the news media, that he was only found guilty of a violation of, "Tacit and Consideration," he was in fact also found guilty of Section 14 2 (e) of the city's Civil Service Code: 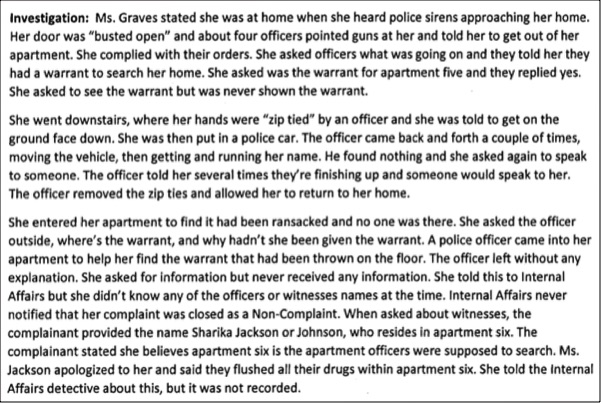 Ms. Graves, responding to how she was mistreated and disrespected, filed a complaint with the police department's Internal Affairs. The two officers she identified were found in violation of minor infractions, but the larger issues she raised were ignored. 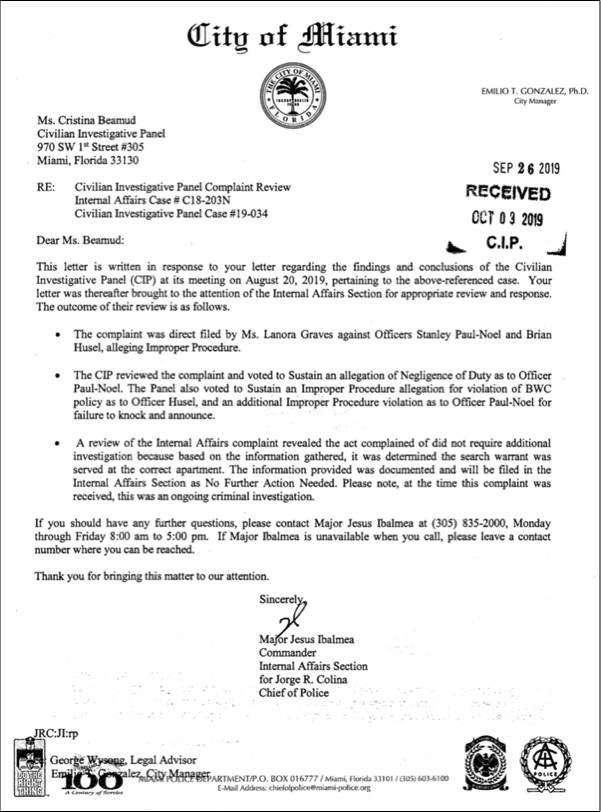 The CIP followed up with their own investigation, and were so concerned over what they discovered that the Chairwoman of the CIP wrote Chief Colina a letter detailing their concerns.

Even with the suckup last paragraph, ther Chief instead of accepting the letter as a good faith effort to try and deal with the issues raised in this case, the Chief took umbrage at the tone of the letter and allegedly, according to my source, went crying to the Mayor, who last November called the Chairwoman and the Executive Director of the CIP to his office for a meeting with him, the Chief, and Assistant City Attorney George Wysong who is the police department's legal counsel, where they supposedly read them the riot act about writing letters like this to the Chief.

I posted all of this on June 4th.

Several days later Steve Navarrete, a former policeman and private investigator who was appointed to the CIP last year posted the following Tweet.

At Thursday's Miami City Commission meeting, Mayor Francis Suarez, decided that in spite of all of the issues that have surfaced since the murder of George Floyd, including the information contained in Navarrete's Tweet above and all the supposed "conversations" he's had with community leaders about problems within the City of Miami,

Yesterday I had the opportunity to sit down with community leaders from the Neighbors and Neighbors Association and Miami Save the Kids, who have made it their mission to fight against the fundamental causes racial injustice. pic.twitter.com/mUlAqsNStS

he decided that his first official act in trying to deal with any of those problems was not to discuss or introduce any legislation deriving from those so-called community discussions that dealt with specific problems in the City of Miami, but rather, to use a Pocket Item to introduce a Resolution supporting the creation of a Civilian Oversight Board by the county.

The county commissioners and the mayor, Carlos Gimenez don't care what Francis Suarez has to say about how they should operate the county. This was just another in the back and forth bitch slaps between Suarez and Gimenez that has been going on for a while now.

In short, with all of the issues that he could have dealth with involving his own city, he decided to chime in on a county issue, as if nothing in his city needed or merited immediate attention.

This isn't just an indication of how little interest Suarez has in how the City of Miami is being managed, because at this point you'd have to living in a closet not to be aware of that, but that he has abdicated almost all of the adult responsibilities of his job as mayor to spend his days appearing on TV shows and Talking Head panels where he can expound on how he is "confronting Miami's dark policing past."

From contracting #COVID19 and leading in a pandemic to confronting Miami's dark policing past, @FrancisSuarez talks w/ @SuzanneMalveaux about the difficult decisions he's made this year. Check out the latest from #AspenIdeasNow here: https://t.co/p5F7WxM7Ub

It's a sorry state of affairs when  the has turned out to be a weasel who's doing everything possible to exploit this crisis as an opportunity enhance a phony resume in the hopes of shoehorning himself out of Miami into a cushy, high-profile job elsewhere, and a Chief of Police who claims to take offense at the members of the Black PBA for in his words being, "a group of individuals who would take the murder of George Floyd as use it for their own self-serving purposes to push their own agenda is disgusting," while there is more than ample video evidence that he not only did that himself during the first weekend of protests, but that in that effort he engaged in a willful and persistent effort to portray the protesters as pawns of "outside agitators" who had come to Miami to ferment trouble.

Instead of Miami being a model to emulate, it's a model of what happens when grifters and opportunists seize control of a municipal government during a time of crisis.

In short, it's Miami, Bitches!