Miami changed a lot from the time that I was a skinny kid riding my bicycle all around Miami to the time twenty seven years later, when I decided to move back.

I wasn't here for the McDuffie Riots but I had seen them on TV, and one of the things I noticed on my return was that not only was the Overtown of my youth largely gone as a result of the fires from the riots, but it was evident that that vibrant and bustling centerpiece of Miami's Black community would never return.

Between the construction of I-95, I-395 and the riots, Overtown like other historic Black business districts in other cities throughout the country had been carved up like a turkey, and the folks who remained became a population that over time became in the language of social scientists, "left behind."

In the process of writing this blog over the last 11 years, I gained a greater understanding of the political and economic impact that the decisions made by politicians in municipal government have on communities like Overtown and Liberty City, and I marveled at how brazenly the white and hispanic politicians got away with blatant racist acts, and how the lone black politician entrusted to look out for the residents of District 5 all too often joined them in exploiting the Black community for personal financial gain.

It wasn't just the money that got funneled to those in the Family And Friends Plan that was disturbing but also the apparent unwillingness of the District 5 commissioner to lookout for, or protect the heritage and history of Miami's Black population.

The efforts to preserve the Lyric Theater and the Hampton House are actually exceptions that proves the rule.

A drive through Overtown and Liberty City reveal few, if any monuments or memorials that speak to the historical contributions that people in those communities made to the history of Miami.

yes, there's a street named after Martin Luther King, and yes several schools have been named after prominent Black historical figures, but overall the efforts to memorialize and honor the Black folks whose contributions, including on occasion their lives, made a significant impact on the life of Miami have largely been ignored, or brushed aside, especially when you consider that in the 50 or so years that the Cuban exiles have been in Miami they pretty much created a new business in sign making for all the signs renaming the streets in Little Havana to honor not only their civic leaders, but countless family members of Cuban exiles with political connections.

All of this was brought home to me when I watched a video of Professor Marvin Dunn's recent, "Goodwill, Love and Solidarity" tour. 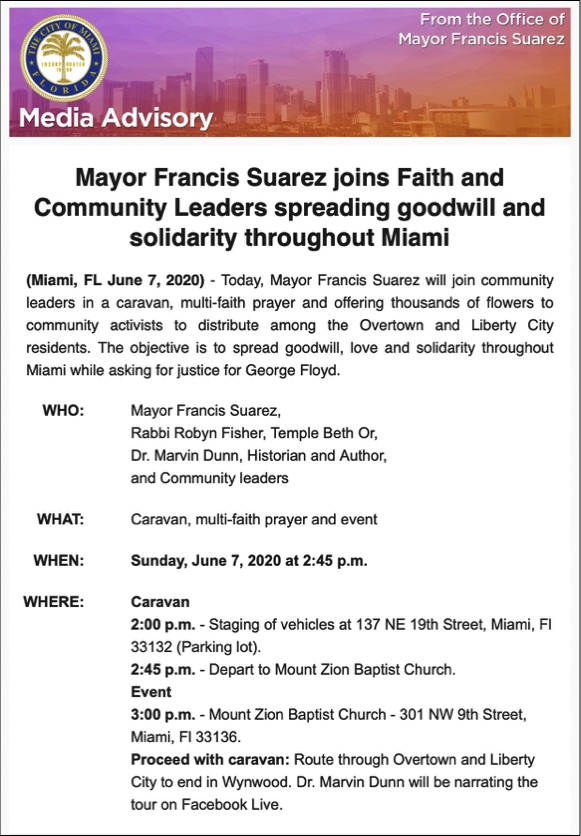 The tour ended at the intersection of North Miami Avenue and 38th Street.

That was because it was at the curb of the sidewalk in front of the building there now where the cops that had been chasing Arthur McDuffie on his motorcycle beat his brains out with their flashlights. 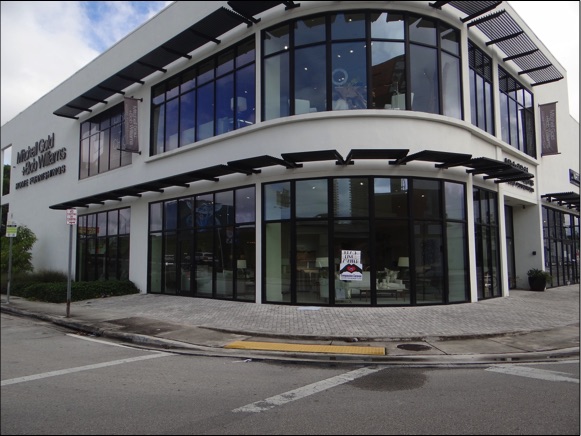 I did not know where McDuffie had died before I heard Professor Dunn point to the very section of the curb where McDuffie's head had lain after they beat him.

It wasn't just discovering the place where McDuffie had been murdered that prompted me to start thinking about the way that Miami treats it's Black history, it was also Mayor Francis Suarez's response to what Dunn said that made me realize that he had lost whatever sense he might have had about what it takes to be the mayor of a multi-ethnic city, because when Dunn in the course of describing what happened to McDuffie served him up a softball pitch that went right over Suarez's head, and I'm being kind in saying that, because there is every possibility that he clearly understood Dunn and chose to ignore him not out of ignorance, but out of an unwillingness to do anything that might upset anyone in his Cuban base.

All of those politically unsophisticated protesters on the streets who might be thinking that because the Mayor of Miami had shown up with his bodyguards ans TV cameras to talk with you is actually  paying attention to your concerns have to remember that first, he's desperately trying to shape a media image that might open a door to let him leave Miami for some cushy job elsewhere, and secondly, his father is currently running for mayor of Miami-Dade County and Junior is not going to do anything to upset the base of old Cubans who they rely on for votes, and who in many cases are as racist as any old Cracker in a small town in the South..

Below is the portion of the video where Professor Dunn explains where and how McDuffie was killed, and as he points to the sidewalk, says, "There should there be a memorial here...(his next words get drowned out by traffic, but end with)...Maybe one day there will be."

As the mayor of a city that at that same moment was having protesters marching in another part of the city and chanting "Black Live Matter,"  Dunn's question was a perfect setup for Suarez to respond by saying, 'Marvin, I agree, and I promise you I'm going to see that we put a memorial there.'

Instead, Suarez ignored Dunn, and started talking like some New Age Spiritual Healer about the, "infinite value" of humans.

It's all in this portion of the video.

In case I was mistaken in my opinion of Suarez, I paid attention to last week's city commisison meeting to see if he would introduce a Pocket Item asking the commisisoners to support a memorial for  McDuffie.

What he did do is introduce a Pocket Item asking the County Commisison to create a Civilian Investigative Panel, because it was the kind of pandering move that made it look like he wasa concerned, but at the same time evaded and avoided having to do anything about the city's own Civilian Investigative Panel, a group with multiple problems that  I've recently written about, and also revealed that even after those TV and photo ops of him talking with protesters, he had nothing of value to bring before the commission reflecting their concerns.

There are those who I am sure will quickly point out that the location where McDuffie died is in District 5, and that if anyone should have been leading the charge to mark the location of McDuffie's death, it should be Commissioner Keon Hardemon.

They would be right, and if McDuffie's last name had been Hardemon, there would probably already be a pedestal, with a bronze plaque and maybe even a sculpture on top of the police beating a guy on the ground with their flashlights, because the one thing that Keon Hardemon has demonstrated time and time again since he's been on the city commission is that he will spare no effort, and absorb any criticism in his efforts to make sure that his "Uncle Billy," his "Auntie Barbara" and as many of the other members of the Hardemon family receive all the financial benefits that they can from his position as a city commissioner.

Unfortunately, Keon Hardemon never saw the value in spending any money to preserve anyone's legacy except that of his family and so it's left to the Mayor of Miami to step up to the plate and do the right thing.

Francis Suarez has in the 2 1/2 years he's been mayor spent gobs of money for his own self promotion including spending tens of thousands of dollars hiring consultants to help his create the image of a young, dynamic leader worthy of being elevated to the national stage.

The least he could do, even if it's only so that he could go on some cable show and brag about doing it, is not only order a proper bronze plaque that details what happened at McDuffie, and have a proper ceremony to go along with it's placement, but he needs to ask Professor Dunn how many other places within his city deserve plaques identifying or honoring Black Miamians who unjustly got mistreated, if not killed by Whites folks over the last 130 years, and either install plaques, or name streets, or do something honoring and remembering them too, because if he could, among the first things that he did after becoming mayor was to declare a Katherine Fernandez-Rundle Day, and give her a Key To The City, he damn sure owes the Black citizens of Miami big time for all the bullshit they've had to put up with!