I've acquired a lot of new readers since Marc Sarnoff left the Miami City Commission at the end of 2015, and since he a major player in this story I figured I use the above image - the original version was created by Miami New Times - of how I would on occasion portray Sarnoff in the stories I would write about him.

Sarnoff was a unique purveyor of the kinds of corruption that passes for municipal governance in Miami, and his behavior, often racist and almost always intended to benefit the deep pocket donors who he created new ways to take their money - like the donor assisted Sarnoff Foundation - led to his being called Miami's "Pay To Play" Commissioner during his 8 years in office.

For a short while after his wife lost the election to replace him to then Golden Boy, and now Commissioner Ken "Sellout" Russell, Sarnoff maintained a low profile, but with the election of Manolo Reyes, and then Joe Carollo, Sarnoff became an almost permanent fixture at city hall.

It was thanks to Carollo and Reyes, along with Commissioner Hardemon, who recognized a kindred spirit when it came to screwing the taxpayers on behalf of deep pocket donors, along with an able assist from City Attorney Victoria Mendez from behind the scenes that led to Sarnoff's law firm Shutte & Bowen LLP, being hired as the lead counsel to negotiate a lease with Jorge Mas on behalf of him and his partners including David Beckham and Marcelo Currie of Softbank/Sprint for the lease to acquire the Melreese Golf Course and turn it into a major real estate development under the guise of building a soccer stadium.

That was over a year ago, and in the period since Shutte & Bowen LLC, O'Melveny & Myers LLP, and Fowler White Barnett - the other two law firms who got plugged into the deal flow on this lease negotiation have been as busy as beavers building a bridge from the city's bank account into their firms banks accounts.

In a Miami Herald story by Joey Flechas when the news was revealed that in addition to the lease, the plans had been expanded to seek a Special Area Plan (SAP) designation for the property he quoted City Manager Art Noriega as saying that the plans to finalize a lease were, "not even close."

PHOTO OF THE DAY: WHAT'S UP WITH MAYOR BOY-TOY'S LEFT EYE

Did the Mayor run into a door?  Did wifey bitch-slap him over his maskless late nights frolicking with Miami's chi chi crowd?

Inquiring minds would like to know, because the mayor's vision was already clouded without this discovery. 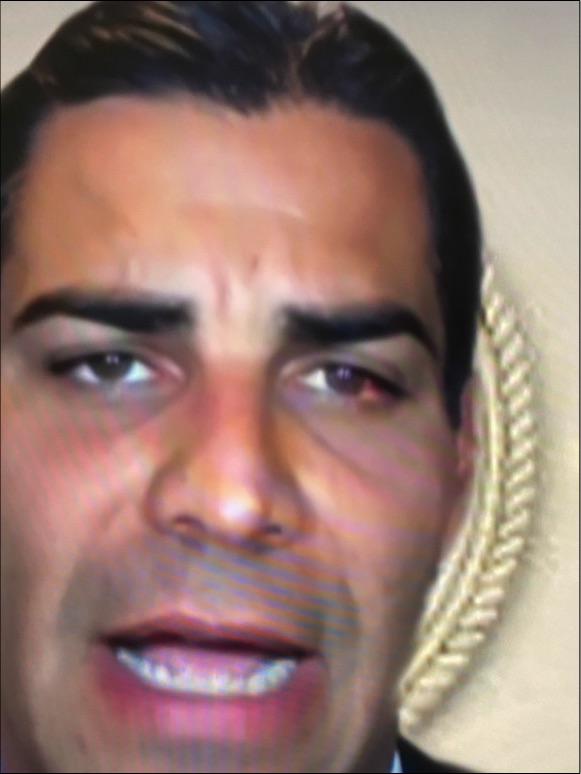 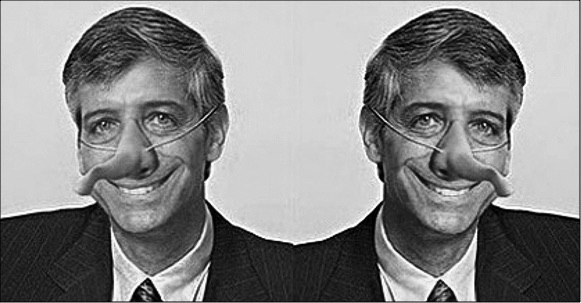 Normally, I would end a story like this at this point.

In this instance, as well as in several other stories I'm currently working on it dawned on me that when you look at a number like $1,129,02508, that doesn't really tell you very much other than it's a lot of money.

Last December, when I posted by first story about how much these law firms were charging the city I posted a copy of the Engagement Letter between the city and Shutte & Bowen LLC.

That letter included the fees and billing that the law firm would be paid.  While I never obtained a copy of the Engagement letters between the city and the other two firms I have to assume that they are similar when it comes to the fees and billing, because there is no way that Victoria Mendez would pay them more money than she would pay to her weekly lunchen pal Sarnoff.

Here is that portion of the Shutte & Bowen LLC agreement.

Below is the billing document that the submitted to the City in February. It lists fees at $534,192.50.

If you start with Sarnoff's rate of $425 an hour, and use that as the divider, it would mean that Sarnoff, if he acted alone, would have racked up 1256 hours of billable time.

Now, I don't know how many billable hours Sarnoff actually charged for, but if you were to limit Sarnoff time to half of 1256, that would come to 628 hours, or 15.7 weeks.

There is no way in the world that a competent, professional attorney could spend 15.7 - 40 hour weeks working on a lease between the City of Miami and Jorge Mas for a golf course lease, and a year later still be, "not even close" to an agreement.

In researching this story, I was led to believe that there was an agreement between the city and Jorge Mas that the city would hire the attorneys to negotiate the lease agreement on their behalf, and that Jorge Mas would reimburse the city for those costs.

This morning I got the following response to my request as to whether Jorge Mas had reimbursed the city any money for these attorney fees. 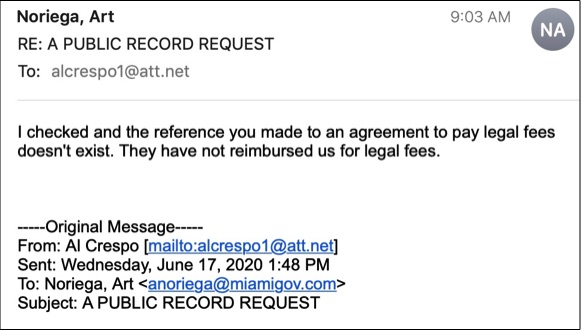 No matter how you look at it, if you add up all the hours that these 3 law firms have charged the city to come up with a draft lease, there is no way that they can with a straight face argue that they've billed $1,117,173.20 in billable hours and still don't have anything to show for it.

Bend over Miami, cause you know what time it is,