WHY DID MIAMI'S FORMER "PAY FOR PLAY" COMMISSIONER MARC SARNOFF, THE ARROGANT LITTLE PRICK, RON BOOK, AND A LAUNDRY LIST OF OTHER FOLKS GIVE ALEX DIAZ DE LA PORTILLA'S PAC $138,900 SINCE FEBRUARY OF THIS YEAR

There is no better way to understand the level and degree of corruption in local government in Miami-Dade County than to spend time looking at the finance reports, ECO's and PAC's set up by various politicians, lobbyists and lawyers as dummy fronts to engage in what has now - thanks to the US Supreme Court's Citizens United decision - become legalized bribery.

On February 9th, I wrote a story about how former Miami City Commissioner Marc Sarnoff, who is now an attorney with Shutte & Bowen, and who as a side hustle is now a registered lobbyist, donated a total of $40,000 from his PAC, Truth Is The Daughter Of Time to his pal Commissioner Joe Carollo.

The only problem as I pointed out in my story was that this $40,000 never showed up in the finance reports of Carollo's ECO, Miami First.

In fact, as of today that money seems to have just disappeared, which even for Miami is a pretty brazen act of prestidigitation.

A funny thing did happen though - and I'm sure that this is just a coincidence - but Javier Banos, the treasurer of Carollo's ECO, Miami First,  discovered a week after I wrote my story that he had some mad money laying around, and loaned himself $40,000 to his campaign to become a Coral Gable City Commission.

Coincidences seem to happen a lot with some of these folks. 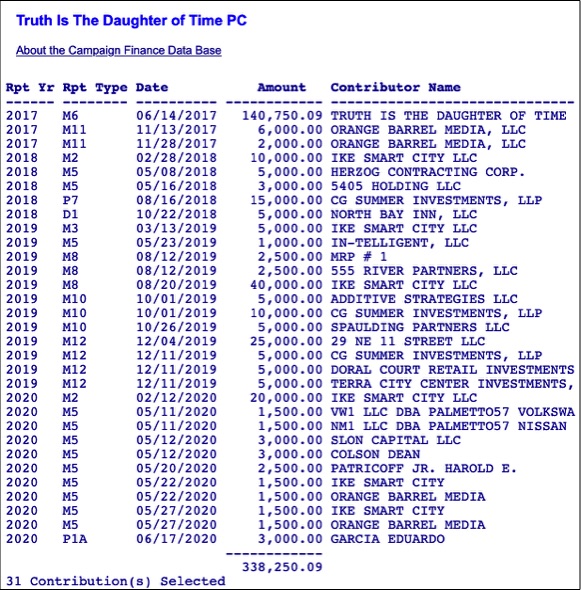 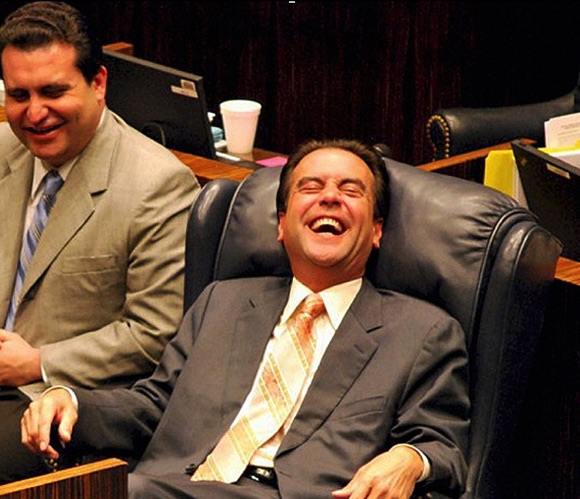 This $40,000 represents almost 50% of all the money that Banos has raised, and since he doesn't have an opponent, I'm sure he give himself back that money which I have no doubt will be put to good use somewhere else.

We start off with Marc Sarnoff, whose PAC, Truth Is The Daughter Of Time, gave him a total of $24,000.

The donations to Sarnoff's PAC, including the $140,750.00 that he transferred from his original ECO,only contains a  small number of companies and individuals, making it easy to see who gives him money. 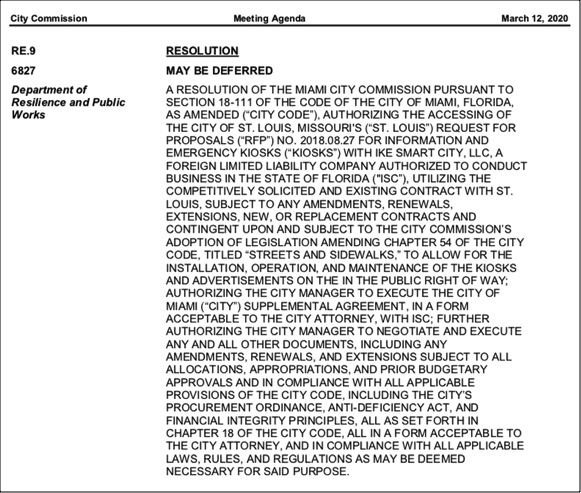 The item was initially postponed, but came back at the April 23rd meeting where Diaz de la Portilla deftly floor managed it to passage. 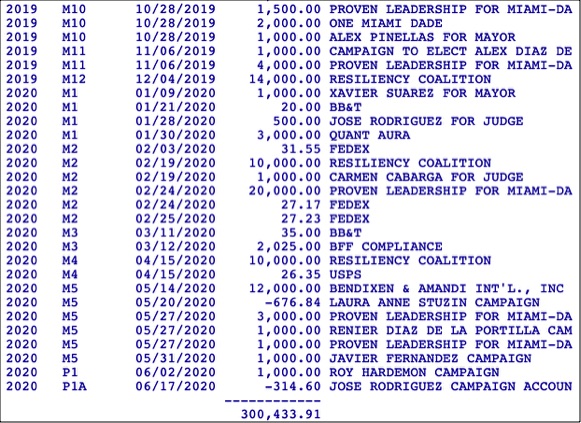 RON BOOK, THE ARROGANT, LITTLE PRICK WHOSE BEHAVIOR HAS MANAGED TO EARN HIM THE UNSAVORY REPUTATION AS A SCUMBAG LOBBYIST GAVE DIAZ DE LA PORTILLA $10,000. THE QUESTION IS, WHY?

Ten years ago, when Jim Defede was a muckraking reporter at Miami New Times, he wrote a story about Ron Book that included the below paragraphs.

In his story Defede revealed that Book's behavior was so odious that some of his colleagues had coined the term, "Ronnie Book Syndrome," to describe his behavior.

In the years since, Book in addition to continuing to lobby decided that he needed to clean up his image by doing good deeds, such as becoming the Chairman of the Miami-Dade Homeless Trust, where unfortunately his megalomania and arrogance have turned him into a control freak unable to separate his identity from that of the agency entrusted with taking care of the homeless in Miami-Dade County.

I've been dealing with Mr. Book and his operation of that agency, and will continue to do so in upcoming stories, but for now the question is why would Ron Book donate $10,000 to Alex Diaz de la Portilla's PAC on June 13th? (Green highlight above) 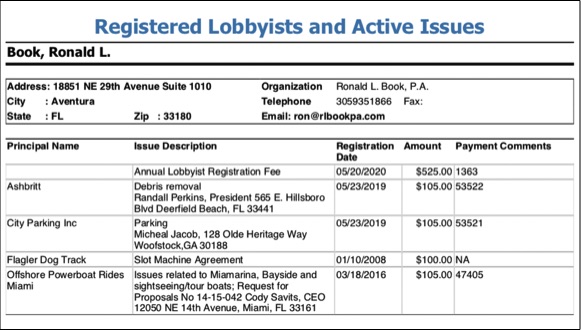 Of Book's two most recent clients, I could find no record of City Parking Inc. in Legistar, but I did find Ashbritt, and that company seemed to have won a contract to pick up debris after hurricanes, until it didn't.

At the April 23rd commission meeting a resolution to award contracts to a handful of companies who had been chosen through an RFP/Competitive Bid process was removed from the agenda after Diaz de la Portilla voiced concerns that he had not had time to review the background on the companies.

Book makes it a constant refrain that he is both, "cheap and frugal," so his giving anyone $10,000 obviously points to some sort of Quid Pro Quo, which then raises the question of which of his clients might he be trying to get Diaz de la Portilla's help with?

Here is his current client list of companies he's registered to lobby on behalf of at the City of Miami.

Even  though money is fungible and sometimes difficult to trace, the fact of the matter is that IKE SMART CITY LLC and Orange City Media - one is owned by the other - in their effort to expand their sidewalk communication kiosk business into cities in Miami-Dade County hired Sarnoff and another attorney from Shutte & Bown to represent them and donated $89,000 to Sarnoff's PAC. (Yellow highlight.)

Those donations coincided with the efforts of Sarnoff and his partner to lobby on IKE SMART CITY lLLC's behalf in Miami Beach and Coral Gables before showing up in Miami.

A review of the expenditures for Sarnoff's PAC show that during the time he was receiving money from these companies, he was in turn passing it out to select politicians in those cities like a modern day Daddy Warbuck, especially to politicians in Miami.

On the March 12th, commission agenda, the following Resolution appeared that dealt with IKE SMART CITY LLC's effort to get the city to allow them to put high-tech communication kiosks on city sidewalks.

Since October 28th of 2019 until May 27,2020, Sarnoff's PAC donated $31,000 to Alex Diaz de la Portilla's campaign, his PAC, and to his brother Reiner's upcoming race to unseat County Commissioner Eileen "La Gringa" Higgins, in what has become recognized as the political equivalent of an organized criminal enterprise's effort to take over new territories.

At the May 14th meeting Diaz de la Portilla came back and moved to scuttle the entire RFP process and called for a new RFP, and new bidders.

Now, there's no way to get Ron Book to fess up as to why he gave  Diaz de la Portilla's PAC $10,000, and I might be way off the mark in that maybe Book has turned over a new leaf and now is giving money away without expecting anything in return, but sometimes people find themselves looking through the wrong end of a telescope.

It's been a long, and documented practice in the City of Miami, as well as in Tallahassee, and a lot of other places too for that matter, to lead people who need a favorable vote from a political body down a Primrose Path, where every step of the way has a toll booth, with someone's hand out.

There are variations to this game. In one version, a proposed item is scuttled, and it is suggested to the people involved that they'd stand a better chance of passage if they were to hire Lobbyist A or Lobbyist B.

This used to be the defacto practice back when Marc Sarnoff and Francis Suarez were both commissioners, and their lobbyists of choice were Steve Marin and Armando Gutierrez.

In an other version, and one that I think has become more popular with at least one, if not two of the current commissioners, is to scuttle or postpone an item on the agenda, and then expect a donation to their PAC or ECO, as a way to reverse their objection and get a favorable vote, thereby cutting out the middleman lobbyist.

It's no secret that Art Noriega was Alex Diaz de la Portilla's hand picked choice to be the city manager, and the way that he references so many of the issues that come up with, "I've talked with the City Manager, and....," is indicative of how close they are, and how they seem to be working in tandem.

We'll just have to wait and see what the city manager does when it comes to hiring the companies to pick up hurricane debris in order to determine whether Book's client, Ashbritt got through the toll booth that Diaz de la Portilla obviously set up.

Alex Diaz de la Portilla used to have a reputation of basically running for office in order to use his campaign money to cover his living expenses.

Now that he's managed to get elected, and more importantly, now that Francis Suarez has all but given him the keys to the management of city and the blessing to do what he wants as long as Suarez is allowed to ride around with his bodyguards, and pontificate on cable TV about what a dynamic leader he is, and how well the city is handling the virus and the protesters, it's really revealing to see who decided to give Diaz de la Portilla $138,900 in less than 4 months.

If you think this is a regular deal, this giving of donations to  a PAC after an election, then go look at Francis Suarez's PAC, or Ken Russell's PAC, as a reference.

In Russell's case, he's received ZERO donation to his PAC since he got reelected  last year.

So the question becomes,  who are some of these donors and why might they be giving tens of thousands of dollars to Diaz de la Portilla now?

Here is the last of donors to Diaz de la Portilla's PAC since February of this year to refresh your memory.

The biggest donor, with $50,000, is Michael Simkins, who owns a large chuck of Overtown property.

LION 12th & 3rd LLC is his company and the site where he has wanted to create a collection of buildings called the Miami Innovation District, which originally included a 660 foot tall high-rise with massive LED billboards on its sidewalls. He also owns some of the property on the eastside of N. Miami Avenue in the Club District, so we can expect that Simkins is looking to get some help in allowing him to develop those properties.

Sun Ventures, coming in second with $25,000, is a front for High Altitude Capital, Inc., a Colorado company whose ownership is shielded through the use of a Registered Agent. This is never a good sign when you find these companys who've incorporated in states where they can hide the real ownership. We can expect though, that this is another developer looking to cover grass with concrete.

Coming in third in a tie with Ron Book with $10,000, is BUILDING MIAMI'S FUTURE, a PAC registered with the city and funded exclusively by the Adler family who a couple years ago obtained a lease to take over the property where the city's Miami River Center (MRC) is located, tear down the building, build the city a new administrative building, along with some high-rise apartment ands condo buildings.

The deal was flogged as a supposedly good deal to give the city a larger administrative building at little cost to voters who were distracted by Francis Suarez's efforts to become Strong Mayor, and the Melreese Golf Course referendum.

Since then it has become one big fight over the realization by some folks, including Manolo Reyes that this might not be a good deal for the city.  My last story about this deal can be found HERE.

The remainder of the donations are ones that you can go looking.

At the end of the day, this is now how business is being done in Miami.

As I predicted even before he got elected Alex Diaz de la Portilla strolled into City Hall with a plan, and that plan was to set up a cash register and go into business selling access and whatever else they need from the city to whoever showed up with money.

In 4 months, he's collected $138,100, and what I've revealed here is only the money that's being legally laundered.