IN THE MIDST OF A RECESSION, A PANDEMIC, PROTESTS OVER THE MURDER OF BLACK FOLKS AND WITH THE PROMISE OF ACROSS THE BOARD REDUCTIONS IN NEXT YEAR'S CITY BUDGET, THE GANGSTERS ON THE CITY COMMISSION HAVE DECIDED THAT THIS WEEK IS A GOOD TIME TO GIVE THEMSELVES PENSIONS 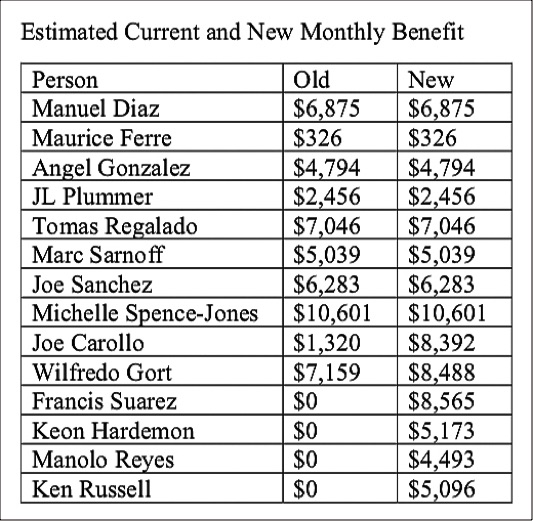 Here is a copy of the proposed ordinance, and below that is a letter of objection that was written and submitted by long time activist Grace Soares last year detailing her objections to this deal.

While Solares cites the City Charter in her arguments, do not be mistaken that the gangsters on the city commission will give that any credence.

Pension Ordinance by al_crespo on Scribd

Never underestimate the brazenness of the gangsters on the Miami City Commission.

In the midst of a perfect storm of bad things happening to city government, they have decided that this week's virtual commission meeting was a good time to bring back the proposed ordinance giving themselves pensions for a 2nd vote.

For those new to the games at Miami City Hall, or those who try to quickly forget what goes on at city commission meetings, Commissioner Keon Hardemon, who will be leaving one year before his term expires as a result of his running for the county commission seat being vacated by Audrey Edmonson is the one who not only sponsored this sweetheart deal last year, but made sure that the language was written in a way that would insure that commissioners could become eligible for pensions after 7 years, and not the traditional 8 years.

The ordinance was passed on the first reading last year but then fell victim to the knife fight going on between Commissioner Carollo and his fellow commissioners and the Mayor, but now since the Mayor has voluntarily agreed to turn over the management of the city to newly elected commissioner Miguel Diaz de la Portilla and his hand-picked city manager Art Noriega, things have calmed down and so the effort to bring the pension back for a second reading this week sets off the annual June and July free-for-all of introducing all the scummy, underhanded deals that make these last meetings before they all go off on vacation until September such a fun time.

For those who weren't around last year, here is the list of former and current commission members who will qualify under this new pension plan.

There used to be a pension plan in the past that was ended in 2010 after the recession back then when the city had to declare a Financial Urgency in order not to go bankrupt.

As the new commissioner who wasn't around last year, Alex Diaz de la Portilla's name will be included in the list, replacing Willie Gort, who retired last November.