BE STILL MY HEART, AND SOMEONE BRING ME THE SMELLING SALTS! THE MIAMI HERALD JUST USED THE WORD DAMN IN AN EDITORIAL

Hysteria seems to have seized the members of the Miami Herald Editorial Board on Sunday, because they went after the Governor in a way that they've never, ever gone after anyone else in all the years that I can remember.

I must admit, that I'm not a person who pays much attention to what any politician has to say in an emergency, because I'm from the school that kinda figures it's my responsibility to look out for myself, and do everything I can to survive on my own, so I'm pretty much unfamiliar as to just about anything that the Governor has been up to but while I suspect that whatever DeSantis has done coulda, shoulda been done better, the notion that the members of the Miami Herald Editorial Board would decide to tell him to, "Act like you give a damn," seems a bit much, given that it was only days before this editorial that Andrew Gillum, the choice for Governor that this same Editorial Board made in 2017 was photographed bare-ass naked, laying on a towel with puke.

Given the fevered moment we find ourselves in, literally and metaphorically, the alleged misbehavior of both the Governor and his opponent are not dissimilar given that depending on whose side you're on politically, the sins of the other are being viewed as a sign that the apocalypse is upon us all, which for once is kinda true.

In a search for stories about Gillum and this incident in the Herald, there appears only one story - 30th in a string of 572 stories - and that story and the above photo reveals how solicitous Gillum was treated by the Herald after this incident, because even if the writers didn't know of the existence of the photo when the story was written, no one at the Herald chose to do an update.

And that underscores one of the real problems I have long had with the Herald's reporters and Editorial Board. Not only are they partisan, but they are stupidly partisan.

Every newspaper collects and sits on stories, and especially stories on politicians that they can use to try and influence an election with if it suits their fancy, or if they need to, use to curry favors like every other special interest.

For instance in the days when the Miami Herald had their building on Biscayne Bay they managed to make serious money from having 2 illegal murals on their south wall that faced I-395, murals that the city refused to anything about even though they were repeatedly told about them in both public and private meetings.

In short, while the Herald can claim that they showed due diligence in their reporting on Gillum's Tallahassee activities, they definitely failed to report on any of the other stories floating around at the time about behavior that reflects the photo and activities that occurred in the hotel room on Miami Beach, and worse, the Herald Editorial Board failed the public by not taking a pass on endorsing either candidate and declaring that the citizens of Florida deserved better candidates.

The Miami Herald is known not only for pulling punches, but for shit-canned stories and on occasion for slobbering all over Miami politicians like a crackhead looking to score a free rock to smoke.

Not only have I written a number of stories that detailed examples of this kind of behavior, but they did this so openly and transparently that you got to wonder now, as they are on the verge of tanking as a newspaper, whether they were ever smart enough along the way to figure out just how badly things are going to end up for them.

Let's be clear, the Miami Herald's days are numbered. I'm not just saying that, their own circulation numbers are saying it.

The Daytona News-Journal has a bigger circulation than the Miami Herald.

Pride goeth before the fall, and the Herald's continued swagger, including their claim that what they have lost in print circulation they are more than making up in digital subscriptions belies the fact that for $20 you can buy a year's digital subscription.

How many $20 subscriptions do you think it takes to cover the operating costs of a newspaper? Even a digital one?

You're now at the mercy of someone else to print your paper, and if shit happens, it happens.

More importantly, and a sign of what's to come, the Herald is no longer owned by a newspaper company.

After the Herald's parent company McClatchy filed for bankruptcy in order to "shed costs of print legacy..." they are now owned by Chatham Asset Management, a hedge fund, and among the results of shedding those print costs many former employees are now questioning whether they will ever see the pensions that they were promised when they took buyouts or retired the old fashioned way.

For months last year the Herald reporters were on Twitter banging their tinpots about forming a union, which they finally did.

The only problem is that they were 15 - 20 years too late. The time to have formed a union was the day after Tony Ridder started talking about "shareholder value" back in 2005, when the Herald was still a real newspaper with assets.

The Herald reporters and editors forming a union now is like the last remaining crew members of the Titanic deciding that that was a good time to form a union in order to protect themselves against the iceberg that was sinking their ship.

The economics of maintaining two separate newspapers in the south Florida market no longer makes much sense, especially economically, and now that the Fort Lauderdale Sun-Sentinel's printing presses are printing the Miami Herald, I predict, and so do a lot of other folks, that it will only be a matter of time, 2-3 years tops, before they swallow what's left of the Herald whole.

In the meantime, the Herald is saddled with the kind of leadership that makes you wonder why none of it's former reporters has written a tell-all book that strips the bark of of that termite ridden tree.

Such a book is long, long overdue.

Some of you will wonder why I chose today to bitch slap the Miami Herald given that the reporters are hard at work, under trying ans risky circumstances to keep you informed.

First, remember that what is happening now will pass, and that if you haven't by now secured a basic survival plan then a daily delivery of information that will only result in creating unnecessary levels of stress and anxiety is not how you need to spend your days.

There are obviously a lot of young people who have  never faced real adversity, or who have surrendered their tender brains to social media, but if you're an adult, by now you should have sorted out what and how you're going to handle the next few weeks or even next few months and so you can now focus some time on the real world outside your front door.

None the less, it's a good question, and it starts on Twitter where yesterday I responded to a tweet put out by Aaron Leibowitz, who as an enterprising young reporter, could back in the day had had visions of working for a newspaper like the Herald and making a real career and name for himself, but probably not now, and who tweeted about Herald reporters having to cover the Governor's press conferences live.

I tend to look at Twitter, depending on my mood, as either a recreational mud-pit, a vehicle to pass on useful and un-useful tips, ideas, music choices and as a notice board for my blog posts, and in that vein I responded to Aaron's tweet by pointing out that risk is part of what comes with the job of being a reporter.

That set off an afternoon of back and forth among any number of folks, some who agreed, some who didn't, and some who weighed in from other parts of Florida because they too were obviously bored.

After a while, when I got tired of people failing to understand that whining on Twitter about the behavior of the Governor was not only counter-productive, but illustrative of the writers lack of understanding how one goes about getting results, I posted the following message. 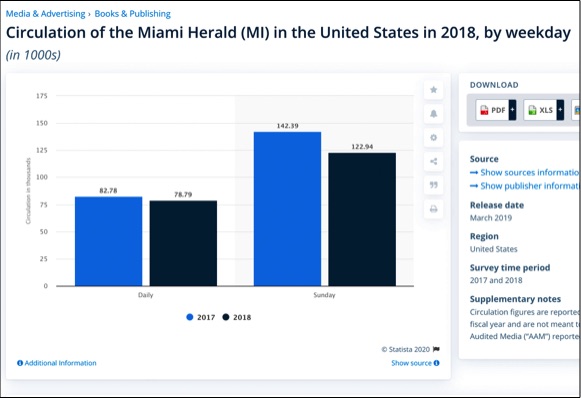 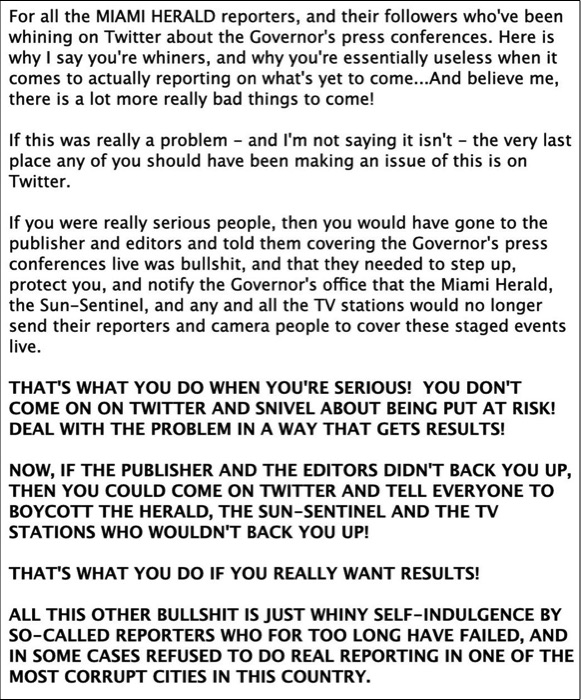 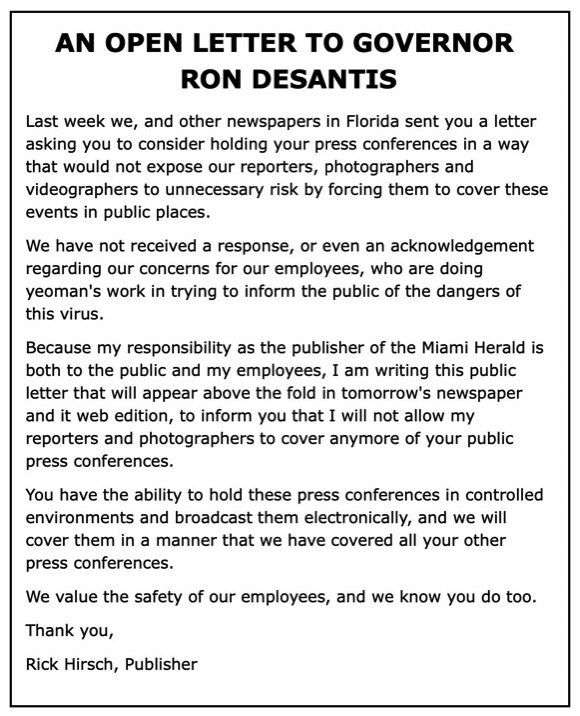 Some time before or after I posted this message someone from the herald had reached out to Rick Hirsch, who I thought used to be the publisher, but now seems to just be the managing editor, to ask him about this kerfuffle, he supposedly responded that he had written the Governor asking him not to continue holding live press conferences, but had not gotten a response.

The twitter storm that I caused when I first responded to Arron's tweet was from what I could gather an effort by Herald reporters trying to gin up public support as a way to influence the Governor.

On it's face that seemed a pretty useless exercise, and so I wrote a letter to the Governor that I thought the publisher of the Miami Herald should have written if he was seriously determined to garner public support for the notion that the Governor should quit holding live press conferences.

As I do whenever I send out notices about new stories on my blog, I sent multiple copies of this letter to the Twitter address that I usually send notices to including some Herald reporters and Rick Hirsch.

I figured that the afternoon fun was over with, and I went back to reading a book.

Later on that evening, I checked Twitter for any responses or Tweets from my followers and discovered that the Tweets that I had sent some of the Herald reporters, including the one that I sent to Rick Hirsch were either missing, or the names of the recipients had been removed.

This had never happened before. I sent a Tweet to those same folks a second time: 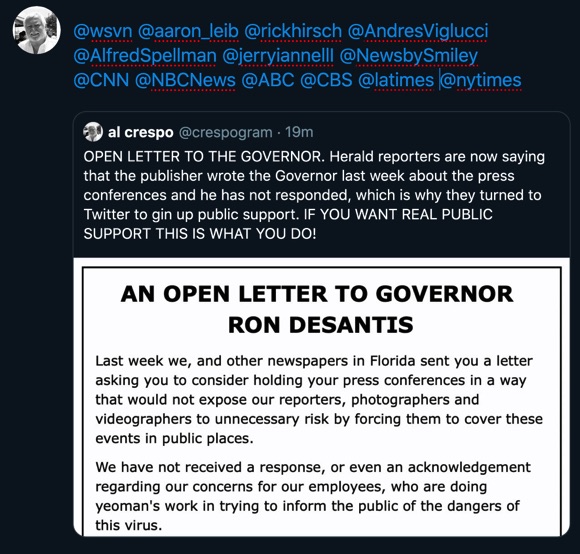 This morning, I retweeted the same message, only I limited it to the 4 Herald people and me just to make sure. 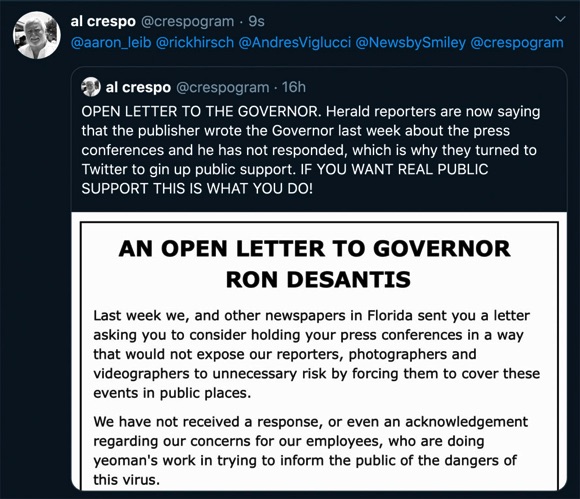 Sure enough, it too disappeared. Obviously, these fine folks, strong supporters of the first amendment and free speech decided to block me.

Now, I'm not upset, because I've not only been banned by the City of Miami and other folks, but banning me shows just how powerful words really are, and given the message that I sent them, the idea that the Managing Editor of the Miami Herald and his minons would decide to ban me from their Twitter feed is actually hilarious and reveals just how thin skinned these guys are.

Which is another reason that the Miami Herald is not long for long for this world.