IN MIAMI, POLITICIAL HYPOCRISY  KNOWS NO BOUNDS WHEN IT COMES TO DEALING WITH THE HOMELESS

In the last several days, ever since a group of folks known as the Dream Defenders managed to capture on video City of Miami public work employees conducting what amounted to a forced eviction of homeless people camped on city sidewalks there has been no shortage of breast beating and claims of anguish over this inhumane treatment of homeless people during a pandemic.

Carlos Gimenez, the mayor of Miami-Dade county was quick to declare that he had nothing to do with it, and Ron Book, the Chairman of the Miami-Dade Homeless Trust claimed that, “We were kept in the dark and were not given any warning,”

On the other hand, Francis Suarez, the Mayor of Miami, who's city employees were the ones engaged in this activity and who made much last Thanksgiving of participating in a staged photo-op where he and his wife "shared their time" with a homeless man never uttered a word.

The Miami Herald, never one to pass up on an opportunity to jump on the band wagon, took up the slack this morning by declaring in an editorial that the city of Miami's efforts of cleaning up the sidewalk  and effectively dispersing the homeless people was not justified: 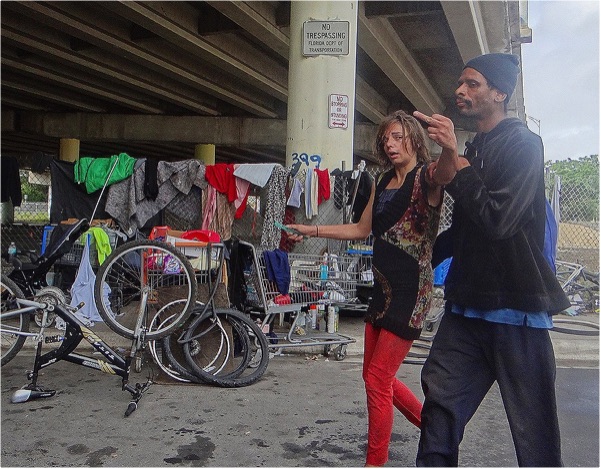 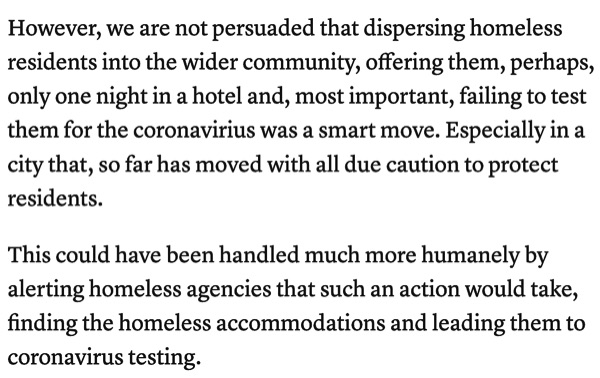 I love the reference that somehow, "dispersing homeless residents into the wider community..." might not be a good idea, along with the chestnut about how this all could have been handled, "much more humanely."

Here's a moral and ethical question for the editorial board of the Miami Herald and the so-called, "leaders of the community," including  Ron Book, and the members of the Miami City Commission.

What's the substantive difference between city of Miami public employees showing up in the months before the pandemic arrived with a garbage truck and water truck at 7:30 AM on Tuesday and Thursday mornings and proceeding to force all the homeless to collect their property and move from where they are camped out, and doing the same, exact thing a couple days ago?

Do you think that there is a distinction that makes a difference to the people being rousted off the streets?

Homelessness is a multifaceted problem, and the easiest part of the problem, the one that everyone likes to congratulate themselves for dealing with in a more-or-less reasonable and humane way is what is known as situational homelessness.

It's the problem of how to deal with what are identified as the chronic homeless that is a far more difficult, and sometimes unsolvable problem.

Twenty years ago it was estimated that there were approximately 1000-1200 chronic homeless people in Miami-Dade County, and today that number still remains at around 1000-1200.

The Homeless Trust has made much of their efforts to deal with the situational homeless problem, and they have a right to do so to a degree, although my investigation into their records are already turning up some disturbing inconsistencies.

It's the chronic homeless problem that they've tapped danced around, and the arrival of the pandemic is revealing not only because it exposes the degree of  their failures in dealing seriously with this problem, but it has also revealed that like the Wizard of Oz, that the guy behind the curtain talking into the microphone is a, "humbug."

Just so there is no confusion as to whether I am correct in claiming that Ron Book, the Miami City Commission and the Miami Herald all knew and  ignored my January allegations, below is the link to that story.

I often have little power to make people do the right thing, but the one thing that I work very hard at is making sure that people can never claim that they didn't know about about the abuses of people and money that take place in