IN DECEMBER OF 2018, JIM RIGGS, ONE OF THE PARTNERS WHO OWNS THE FERRIS WHEEL RECENTLY ERECTED AT BAYSIDE MARKETPLACE SENT AN EMAIL CLAIMING THAT A LOCAL REAL ESTATE AGENT HE HAD HIRED TO FIND HIM THE LOCATION FOR HIS FERRIS WHEEL WAS TRYING TO GET HIM TO MAKE "ILLEGAL PAYMENTS TO AN ELECTIVE OFFICIAL"

Sometime in 2016, a guy named Jim Riggs, a partner in a company that owned and operate several ferris wheels like the one in the photo above decided that having one of their ferris wheel's in Miami during the 2020 Super Bowl would be a sure fire money maker.

The fact that he made that decision in 2016, was a sign that he was  businessman who knew and understood the lead time required to find a location for his wheel, work through the lease and other political and bureaucratic requirements that would need to be dealt with, and of course, doing the work required to erect the wheel and get it up and operating.

To assist him in this process he hired local, high-end real estate agent Patricia Delinois to find a location for the wheel, and to arrange for the lease with the property owner. 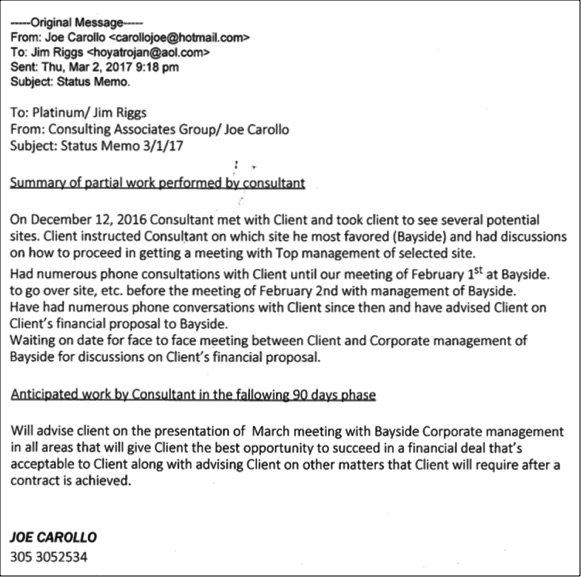 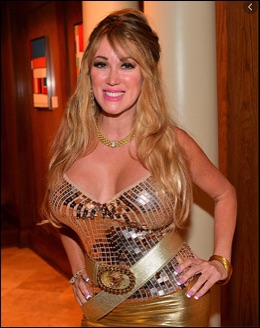 To handle the political and bureaucratic hurdles he hired, "Mayor Joe" Carollo.

Carollo at the time was a private citizen, whose brother Frank was the city commissioner for District 3, and who was also the chairman of the Bayfront Park Trust.

It is not unreasonable to assume that Carollo during the years he was a private citizen traded in on having been the Mayor of Miami, which is no doubt why Riggs referred to Carollo in his correspondence  as "Mayor Joe."

The requirements for the wheel, given space and other requirements stipulated by Riggs limited the number of possible locations, and it didn't take a rocket scientist to conclude that there were only several locations in Miami that would work, one of them being the Marine Stadium property on Virginia Key, and the other being Bayside Marketplace.

A handwritten addendum to the Services Agreement between Riggs and Carollo, and witnessed by Delinois on December 12, 2016, shows that the first choice seems to have been the Virginia Key site.

By March of 2017, that decision changed after Riggs had an opportunity to visit the sites personally.

Instead, he settled on Bayside Marketplace, and according to a memo prepared by Carollo, gave him instructions on how to proceed

Even before Carollo became involved in this business venture, he was already running for the city commission seat seat being vacated by his brother.

In September of 2016, he and his wife had moved from their house in Coconut Grove into a rented condo in District 3, an action that would prompt a long and disputatious lawsuit by his opponent Alfie Leon after Carollo won the seat in a runoff.

Leon challenged whether they had actually lived in the condo for the full year before the election as required by law, and eventually lost that argument.

In the meantime, the negotiations between Riggs, Delinois, Carollo and the Bayside Marketplace leaseholder went smoothly, but because the property was owned by the city, the deal would require an addendum to the existing lease, and at the December 19, 2018, PZAB meeting the item came up for discussion and a vote, and by a vote of 4-5, it failed. 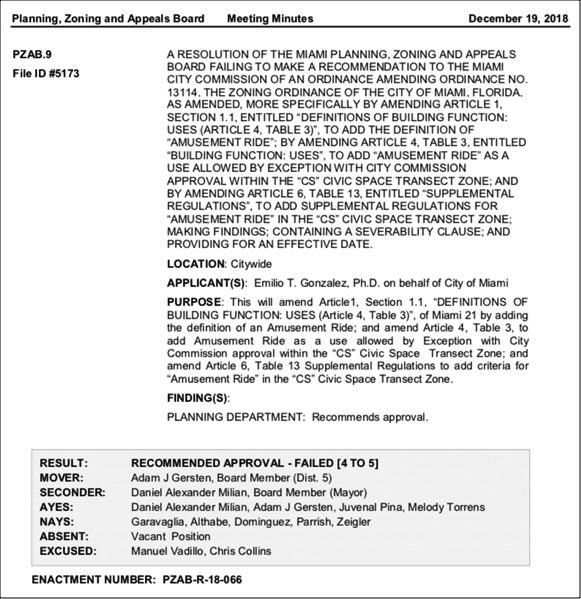 Riggs was blunt in his directions to Delinois for her to shut up and stay out of the way because she was creating problems.

I discovered the email last week when I was going through the court files of the lawsuit that Riggs filed against Carollo for Breach Of Fiduciary Duty, Breach Of Contract and Misappropriation Of Trade Secrets on October 7, 2019. The email was included among the 174 pages of exhibits included as part of the lawsuit.

Beside the obvious revelation Riggs made about being solicited by Delinois for what obviously constituted the payment of a bribe, a request that he claimed to have witnesses and documents to support, the question that immediately came to my mind was what had happened between December 21, 2018, when all these people received this email, and last week when a rumor was beginning to circulate that the FBI was out and about questioning people about what they might know about an alleged bribe and Joe Carollo, having to do with the ferris wheel?

Between December 21, 2018, and the last few weeks of April 2020 is an awfully long time, even for the FBI, had they first been appraised on this allegation back then.

This in turn raised another question in my mind about how all of these people respond when they were informed that Delinois wanted Riggs to cough up an illegal payment for an, "elective official?"

I mean, if somebody tells me that they're being solicited to engage in what amount to bribery of a public official, and I don't say do or say anything about it, then how culpable do I become?

This is a serious crime were's talking about here, not a story about jaywalking.

So, in an effort to get an answer to that question from some of the principals, I sent Jim Riggs, Patricia Delinois and Pamela Weller an email asking them about what they did about this claim.

Here are those emails: 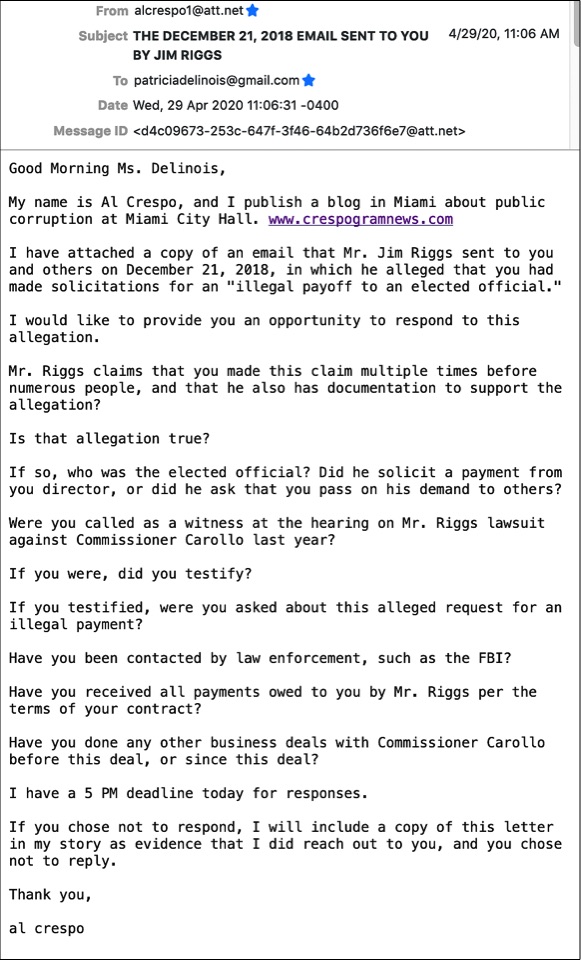 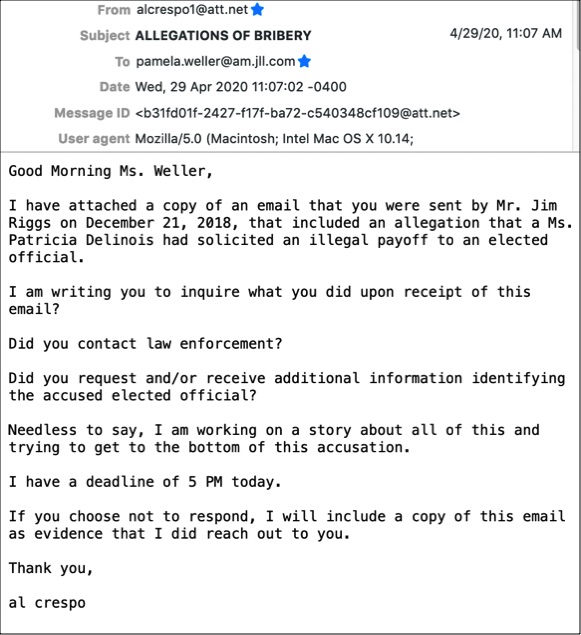 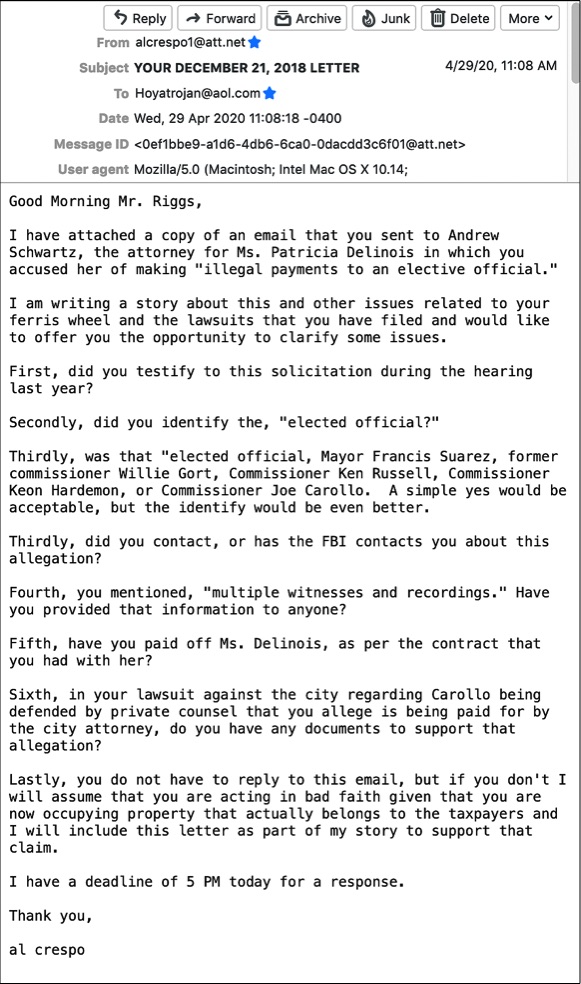 I did not receive a response from any of these individuals, including even a, 'I can't talk about this because it's being investigated by law enforcement.'

The rumor on the street however, is that the FBI is looking for information on whether Carollo took a bribe over this ferris wheel deal.

Maybe there is some truth to that rumor, and maybe there isn't.  Carollo's name isn't the only one that has come up as being a possible recipient of a bribe, if one was indeed solicited or paid.

In fact, if you look at this closely the reason that Jim Riggs is currently suing Carollo is because Carollo tried to scuttle the deal between Riggs and Bayside Marketplace. Carollo wanted Riggs to cancel that deal and move the ferris wheel a couple hundred feet south so it would be inside the Bayfront Park Trust property so that the Trust could collect the windfall profit sharing from the wheel's operation.

To me, and to others that I've spoken with, there are a handful of other "elective officials." who might have had a better argument to solicit a bribe to keep Carollo from having his way, and it's widely believed on past performance, that on any given day, the odds are that one or more of the gangsters at City Hall is always susceptible to a little solicitation, because