AMONG THE FIRST THINGS THAT MIAMI MAYOR FRANCIS SUAREZ DID AFTER HE QUARANTEED HIMSELF IN MARCH WAS TO HIRE A NEW PR ADVISOR/ SPOKESPERSON/ CONSULTANT, BECAUSE WHILE HE MIGHT BE SEEN AS A WEAK AND INEFFECTIVE MAYOR TO HIS CONSTITUENTS, THAT DIDN'T MEAN THAT WITH SOME PROFESSIONAL HELP HE COULDN'T CRAFT AN IMAGE AS AMERICA'S PANDEMIC MAYOR

I am beginning to doubt that Francis Suarez has any plans to run for reelection, especially if Donald Trump gets voted out of office.

His first two years as mayor were bruising at best starting with hiring a City Manager who was clueless and incompetent, and then having to publicly humiliate himself by begging Commissioner "Crazy Joe" Carollo to show him respect after Carollo repeatedly ridiculed him during commission meetings, and then being told by the City Attorney that she, not he, would determine what commission decisions he could veto - a decision which he vowed to challenge in court, and then didn't - are not the kind of moments that work well in reelection campaign ads.

Nor was his decision to hire a personal communications director to enhance his image, who then allegedly used his position to lure a 16 year old boy into the Mayor's office for a little child molestation activity.

Perhaps that's why Manolo Reyes is supposedly seriously considering running for mayor next year, because when it comes to the actual mechanics of municipal governance, Suarez's first two years are so open to challenge that if he does decide to run for reelection, the race could end up with multiple candidates lining up outside the door at the Board of Elections eager to give it a go.

Suarez's original career path had him supposedly going from Mayor to the first Cuban Governor of Florida, but that also doesn't seem likely, again because in a campaign for Governor all of those nasty video clips of him groveling at the commission meeting for Carollo to show him respect and City Attorney Victoria Mendez telling him that she was the one who would determine what he could veto would be powerful ammunition challenging his character, which leaves only one possible option: try to craft a national image that could would make him appear to be an acceptable token Republican that could be made the head of some government agency or department in the next Democratic administration, if Donald Trump isn't reelected.

It's no secret within City Hall, and especially within the Mayor's inner circle that the decisions he makes today have as much or more to do with image management than with actual governance.

While Suarez has always been a little bit of a media whore, he has now decided to go all in by jumping on the on the current pandemic train to create the image of America's Pandemic Mayor.

He wasn't, but it took a while for that truth to catch up to self-promotional value of repeating that claim on cable news shows.

What only people within the Suarez circle were aware of was then was that while Suarez was in his house doing daily updates on his condition for any TV station that would put him on, he had also decided to hire a consultant to help him mould his new image.

Her name is Maria Soledad Cedro Limperopulo, and she quietly came on board officially as Suarez's new media advisor/spokesperson/ consultant on March 25th. 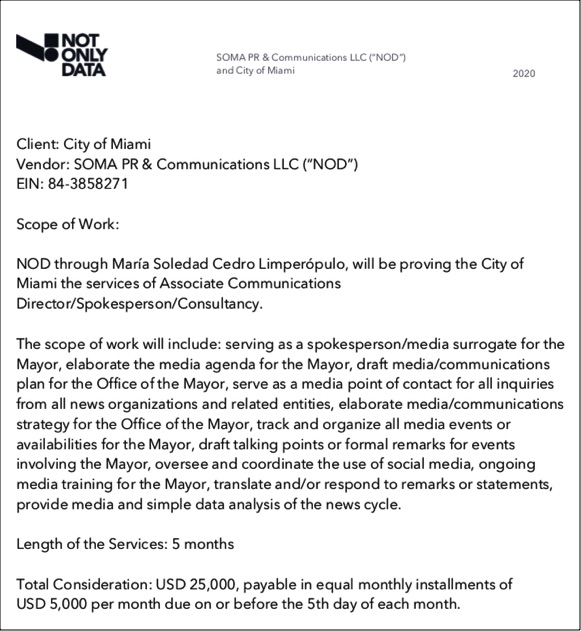 While the memorandum makes it very clear that Ms. Cedro Limperopulo was being hired by the Mayor to provide him and his office with her services, the $25,000 that she was going to be paid was not going to come out of his office budget.

The cost was coming out of the city's General Fund. 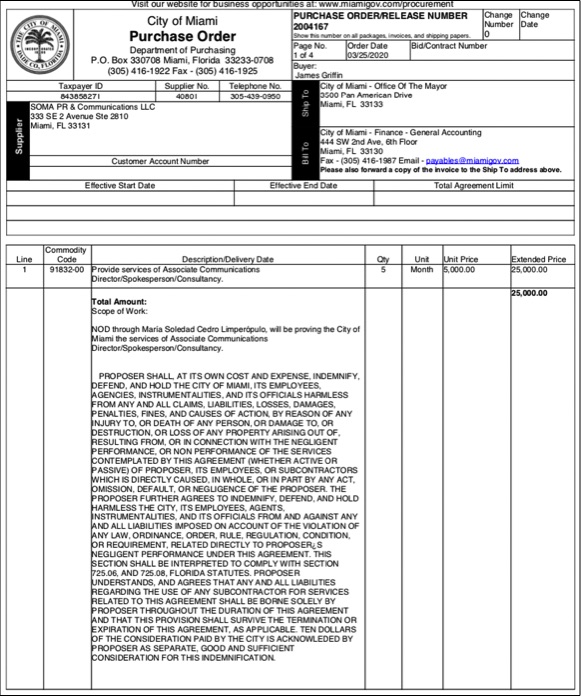 The mayors of most American cities have more than enough to keep them busy without seeing a need to go out and hire a media advisor/spokesperson/consultant to manage and craft their media image, especially cities with a population of less than 500 thousand.

You only do that when you have an ulterior agenda.

Commissioner Joe Carollo had even put an item on the agenda late last year because he wanted to bring this up for discussion, but since the deal between Commissioner Alex Diaz de la Portilla and Suarez was made where Suarez gave de la Portilla and his hand picked choice for City Manager Art Noriega a blank check to run the commission and the city as they wanted long as they covered the items important to him and curbed Carollo's continuing desires to embarrass and humiliate him during commission meetings, that item, like several others has disappeared.

What this means is that since March 25th, we can assume that many if not all of the decisions on how the Mayor has dealt with pandemic issues in the city of Miami, have been stage managed for how they can be used to create the image of Francis Suarez as a dynamic leader in a time of crisis, including today's appearance on this Washington Post live stream. 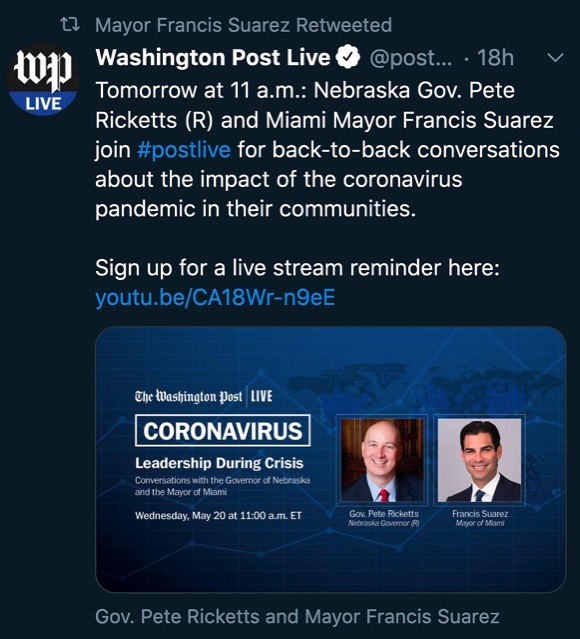 Which brings us to today.

It's true that 3 other cities chose not to start loosing the emergency orders along with the county on Monday, but what was the real reason that Miami didn't?

It certainly wasn't that 48 hours could provide statistical evidence if things were going wrong as a result of the county's decision, but could it have been calculated on a desire to appear on the Washington Post show today allowing Suarez to present himself as an example of the kind of prudent leadership that is needed to keep people safe?

Relying on a collection of self-serving politicians during a crisis is always problematic, but relying on one whose spending the taxpayers money to manage his image during a time of crisis means you can only be in