THE HOMELESS TRUST SPENDS $200,000 A YEAR FOR A BRANDING/MARKETING/CRISIS MANAGEMENT COMPANY TO CHURN OUT  STAGE MANAGED PHOTOS AND SLICK VIDEOS AS A WAY TO BULLSHIT THE PUBLIC ABOUT WHAT A GREAT JOB THEY'RE DOING.  IN FACT IT'S LITTLE MORE THAN PROPAGANDA THAT DESERVES TO BE LABELED AS FAKE NEWS

Ron Book likes to brag that when it comes to spending the taxpayers money on behalf of the homeless folks in Miami-Dade County his is nothing if not, "cheap and frugal."

For an unknown number of years - unknown because the public record request I submitted for copies of the first contract the Trust entered into with this company has not been complied with - the Homeless Trust has had a deal with The M Network, a  branding/ marketing/crisis management/company run by the husband and wife team of Lisa and Thom Mozloom. (See PART XIII of this series for Public Record Number 6.)

In a 2016 story, Doug Hanks put the cost associated with hiring this c company at $143,000,00 which included a "$53,000 budget for promotional materials and other reimbursable expenses."

What has the Trust received for all of this money?

Again, part of my public record request was for copies of the work product that this company has generated in the last  3 years, and even though the Trust has failed to provide me with any of that information it's an easy process to go on the internet and visit the Trust's Twitter and Facebook pages to find examples of what this company's strategy has been to appreciate that these fine folks have been cranking out slick, often deceptively misleading propaganda that has been crafted with a goal of bullshitting the taxpayers about what a great job the Trust has been doing and how they've largely done away with homelessness is in Miami-Dade County.

Although the Trusts's total revenue for 2018/2019 was $66,782,100, when it came to providing supplies for the chronic homeless folks on the street, Book it seemed didn't believe spending any Trust money.

In early March, homeless people were being given little bottles of hand sanitizer donated by the DDA.

It's hard to determine whether the homeless guy is laughing because being handed this little bottle of hand sanitizer is like being handed an umbrella in the middle of a hurricane, or whether because the person taking the photo - either Lisa Mozloom or one of her employees - told him to smile. 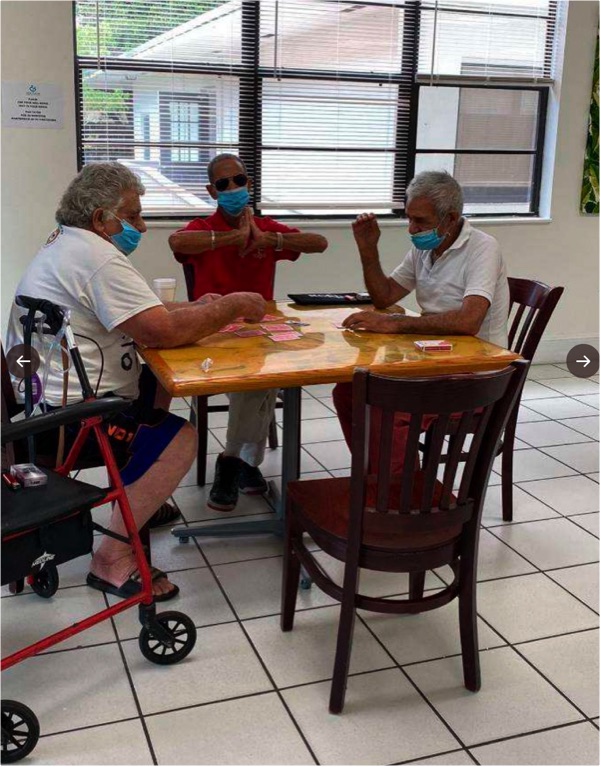 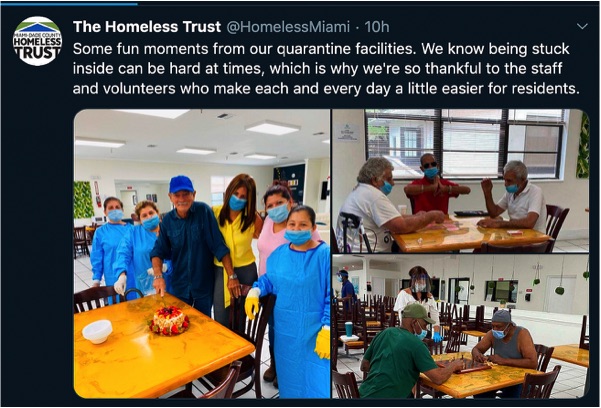 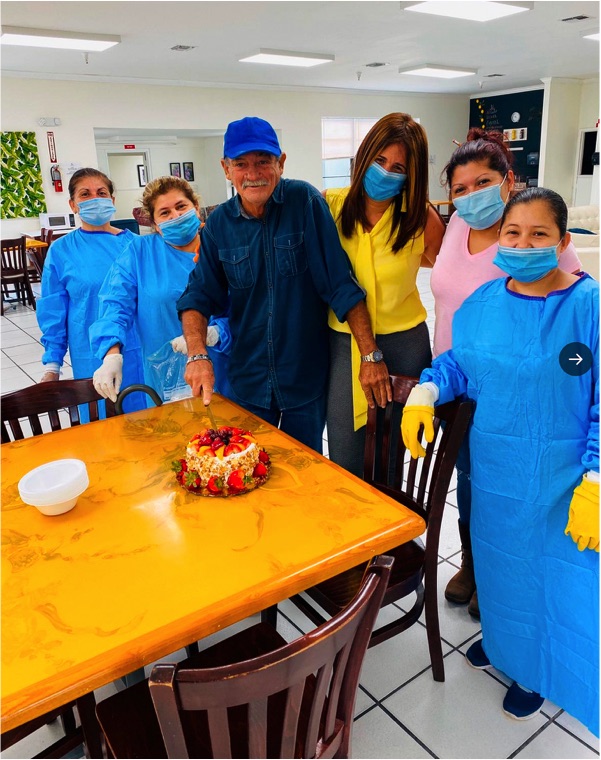 Has the Homeless trust really ended homelessness for veterans?

This is the last day of May 2020. Can Ron Book put his hand on a bible and swear that there isn't a homeless veteran on the streets of Miami-Dade County today?

But like so many other realities, that reality doesn't coincide with the Ron Book's propaganda operation because just a couple weeks ago he made the claim during the Special Meeting of the Miami City Commission when they were grilling him about the testing of homeless people within the city for the COVID-19 virus.

Even more than the first video, this video also posted on You Tube by The M Network in December of 2019, lacks in any factual evidence to support the claim that today, "there are far fewer people living on our streets."

It's just a slick, music video that uses photos from 25 years ago juxtaposed with what is on those same properties today. 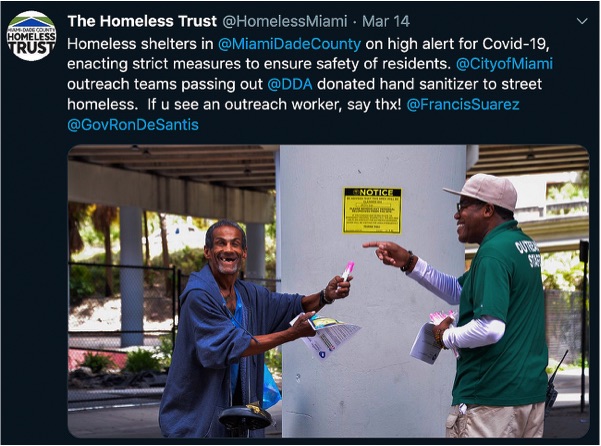 By April they had hooked up with United Way to solicit care packages that would include bottled water, snack food, hand sanitizer, masks and personal hygiene items.

The defining thing about all of the photographs on the Homeless Trust's Twitter site is that with the exception of the one photo below, they could all be reprinted on the pages of any gentile ladies magazine because NONE OF THEM include photographs that show the mean, ugly reality of the problems of chronic homelessness in Miami-Dade County.  Don't believe me, click HERE. 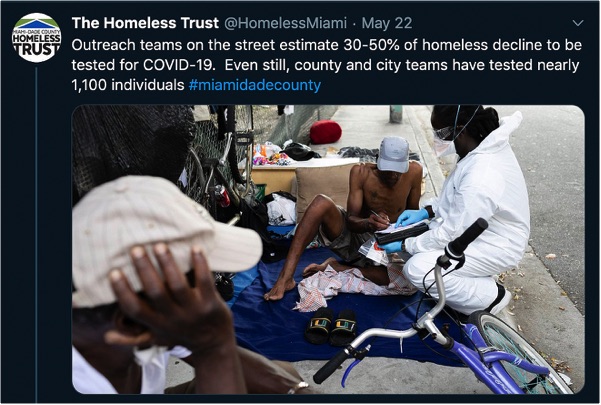 Even this photograph was composed so that the sidewalk behind him was clear and clean, to make it appear that this individual was just a random lost soul and not part of an encampment of homeless people gathered together on Miami's sidewalks.

While the photographs were just sanitized examples of careful composition, or the usual examples of posed photos with politicians and happy faces, the videos produced by The M Network went further down the road to outright propaganda.

Ron Book likes to brag about how the Homeless Trust has eliminated homelessness among veterans.

To bolter that claim The M Network produced the following video in 2018, that included the usual patriotic tropes of aerial footage of exploding bombs, martial music, and dramatically cut footage, including the grateful mother with a tear in her eye and a home of her own, as a way to "sell" the claim that the problem of homeless veterans had been solved thanks to The Homeless Trust.

The irony - AND NOT IN A GOOD WAY - is the last photo that they used, which is looking northeast into the overflow parking lot for the city's MRC building between SW 2nd and 3rd Avenue has seen the homeless move from inside the lot, to SW 3rd Street.

Here is a photo that I took at approximately 7 AM, this Sunday morning. 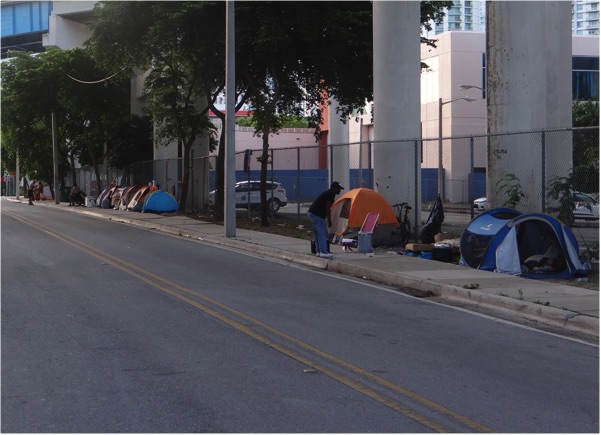 This brings us back to the first photos of the Trust's quarantine facilities above.

As with the other photographs notice how posed the photos are, and how clean and picture perfect everything looks.

If this is a quarantine facility, why is this dining/community seem so empty with all the chairs on top of tables?

To prove my point, here are two videos that I shot on Saturday morning, May 30th, at around 10 AM.

The first one is of the homeless encampments on NW 1st Avenue, between 13th and 14th Street and the one around the corner on 14th Street.

This second one is the new encampment around Jose Marti Park on SW 4th and 5th Streets.

If you didn't notice it the first time, there is a very significant difference between these two locations.

The first is in District 5, where both Miami City Commissioner Keon Hardemon and Ron Book have bemoaned the existence of the pup tents that were passed out by the group Dream Defenders, and the second video is in District 3, where City Commissioner Joe Carollo has gone further in bemoaning the existence of homeless people who he rails aren't even from Miami, but where he did what neither Ron Book and the Homeless Trust, or Commissioner Keon Hardemon with all the bullshit that he's spewed over the last couple years about cleaning up  this part of his district has ever done, which is that Carollo had a large Porta-Potty set up on the corner across from the encampment, so that these homeless people wouldn't be forced to shit in the street.

You'll never see any videos or photo op's coming from The M Network about what the conditions on the streets of Miami really look like, or Ron Book and Keon Hardemon posing with fancy Porta-Potty's on the corner of any streets close to these encampments, because it's a lot easier easier for politicians and hucksters like Book to bemoan the shit on the streets, than to do something to try and at least minimize the problem.

If the Dream Defenders really want to do something, they ought to go out, collect the shit on the street, bag it and sent to it to Ron Book, Keon Hardemon, Mayors Carlos Gimenez and Francis Suarez, and all of the members of the Homeless Trust Board.

If they won't deal with the shit on the streets, you can bet they won't waste a minute dealing with it in their offices.