'DO AS I SAY, NOT AS I DO.' MIAMI'S MAYOR NOT ONLY WANTS EVERYONE TO KEEP WEARING MASKS, BUT HE'S BEEN ADAMANT ABOUT MAINTAINING THE SHUT DOWN OF BUSINESSES SUCH AS BARBER SHOPS

A couple days ago Miami's Boy-Toy Mayor Francis Suarez took to Twitter to congratulate Miami Herald columnist Fabiola Santiago on a Op-Ed she wrote about the dangers of opening up the economy too soon.

Here is the photo that the mayor attached to his tweet. 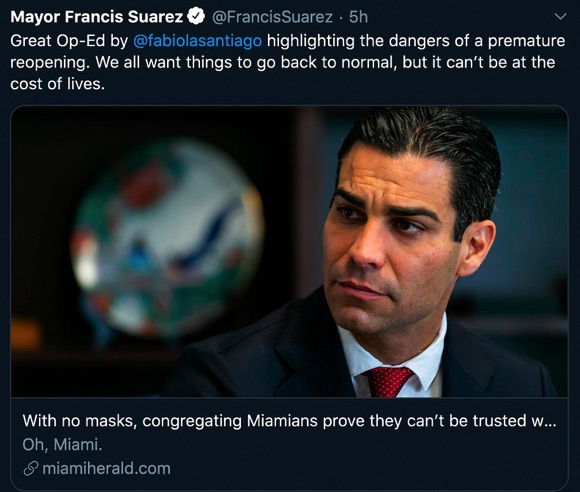 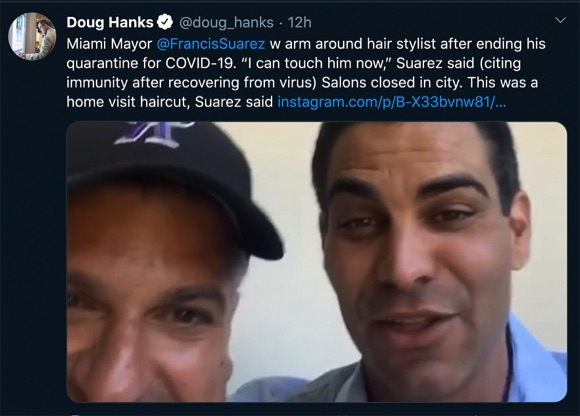 If I had to bet, I'd say that the photo was part of a recent photo shoot, and you can see that he's been styled to an inch of his life, especially his plucked eyebrows and his gelled hair.

In fact, every photo and video of the mayor since he's been out of quarantine shows him having every single hair on his head cut, gelled and in place, which in a way is understandable because as part of his campaign to become a TV mayor instead of a real one, looks matter and being quaffed - hair freshly set and styled - is part of the look he obviously wants to cultivate.

Back when he got out of quarantine, the very first thing he did after the staged video of him hugging wifey and the kids as they pulled up at the house and got out of the police driven chauffeured SUV was to post a photo - without masks, mind you - of him and his personal barber after he got a hair cut.

Now, some who read this will probably say, 'Hey Crespo, quit being petty. Let the mayor have his haircuts.'

My response is, sure, but what about all the other folks who would like a haircut but can't get one because, the mayor has supposedly told some of his closest pals that he plans to try and keep the city locked down just as long as he can.

Will folks be forced to have Amazon send them one of those attachments that you can stick on a vacuum cleaner and use that to give themselves haircuts?

The rallying cry surrounding trying to deal with this pandemic is that, "We're all in this together."

We never have been, and we never will be, and while it might seem petty to some, when the mayor of Miami tells folks he's looking out for their best interests by refusing to allow businesses like barber shops to open, while showing up for TV appearances looking like a Latin heart throb, all styled and profiled because he has a personal barber that allows him to evade the rules that he's set down for everyone else to follow, then that's just one more example of the kind of "FUCK YOU," mentality that underscores that you're living in