DOCUMEMTS OF INTEREST ON CURRENT ISSUES AND PROBLEMS FACING THE VILLAGE

I am writing to express some concerns I have about you and your judgement in continuing to support Kevin Lystad as the Chief of Police of our Village.

In early 2019, Chief Lystad retired as Chief after completing his DROP (Deferred Retirement Option Plan) and on March 25, 2019, you rehired him as the Chief by making him a contract employee.  The contract called for the Chief to receive a base pay of 56,250.00.

In addition there were a number of additional financial benefits in the contract  that included his receiving, "the Executive Benefit and State Supplement," and with your approval, "the same cost of living increases as are granted to other non-bargaining employees."

In addition,  the contract called for him to receive, "all other benefits as specified in the current Miami Shores Village and Police Officer Collective Bargaining Agreement (i.e. health insurance.), and the Village, "will contribute 100% of the maximum allowed contribution into the ICMA 457 Roth Deferred Compensation Plan on the employee's behalf.)

In addition to all of this, Chief Lystad, when he retired, started collecting a pension, which in calendar year 2020 paid him 7,627.38.

The contract also agrees to pay for all of your professional dues to the various organizations he belongs to as well as covering his travel expenses.

There are other financial benefits as well, but I will leave those for any resident curious enough to request a copy of the contract from the Village Clerk.

The contract between the Village and the Chief was also generous in excluding any deductions of these pension payments to the payments he received as a result of the contract, therefore establishing that he now receives a base annual cash payment of $ 253,827.38, plus thousands, if not tens of thousands more as a result of the Village's generosity.

The contract between the Chief and the Village was for two years, which expired on March 31, 2021, but that doesn't seem to be a problem because it can be, "extended for up to two years by mutual agreement."

Under any circumstances, this is a pretty sweet contract agreement, and one which the residents and taxpayers of the Village would expect that the Chief would  honor by focusing ALL of his attention on making the Miami Shores Police Department the very best it can be.  In fact, the contract calls for the Chief to be a, "salaried full-time employee," who as a Department Head, "shall be required to work in excess of 40 hours per week to insure the proper oversight of the department."

On May 17, 2018, at least 8 months before he retired, Chief Lystad became a corporate officer, with the title of Chief Operating Officer (COO), of Advantage Law Enforcement Compliance, Inc. (FEI/EIN NUMBER 83-0660369).

This means that for the last 8 or 9 months that he was a full-time Village employee, the Chief was moon-lighting as the COO of a private company, or as the young people today call it, he had a side hustle.

What makes this even more interesting is that Mr. Steven J. Finizo, the Chief executive Officer (CEO), of this company, is also the CEO of Advantage Networking, Inc.

In short, the Chief went into business with the guy who has the contract to provide the Village with a critical service, and did so for 8-9 months as a full-time Village employee without this ever being revealed.

But it gets better.

No where in the contract that you entered into with the Chief in 2019, is there any reference to his employment as the Chief Operating Officer of a company providing IT security services to police departments throughout the state of Florida,as well as to the Village of  Miami Shores and its Police Department.

How can that be?

It is inconceivable that you, the Village Manager did not know of his plans to become the COO of this new company while he was a full-time Village employee, and that the individual he was becomes a business partner with owned and operated a company that had a contract with the Village, nor is it acceptable that you would continue to allow this arrangement to continue without so much as a word to establish some sort of separation between Lystad's duties and Chief, and his duties as the COO of this company.

A relationship that is not even separated by a fingernail from providing, and receiving payment for providing security services to his police department.

This was, and is important, not only then but now, since a lot of the networking and efforts to sign up and talk with both potential and actual clients would understandably take place at all the meetings of the various Chief of Police Associations that the Chief belongs to, and whose membership dues and travel expenses to and from these meetings are paid for by the residents of the Village.

Nor is there anyway to monitor, or go back in time to discover how much time the Chief has spent engaging in his duties as the COO of a private company, while on the taxpayer's dime during the last two years, because he could easily sit in his office and do business on his cell phone, or visit other police departments under the guise of his association with one of the organizations he is a member of.

You have run this Village as a personal fiefdom for far too many years, and these revelations involving the Chief of Police running a private IT security company from his office, both while he was a full-time Village employee, and now while he has been under contract with the Village with your obvious consent and approval is a sleazy piece of business that warrants the new Village Council members to fire you as it's first order of business.

Advantage Contract by al_crespo on Scribd

In response to the election of a new majority to the Village Council, and to assist in any future discussions regarding Village Manager Tom Benton, Police Chief Kevin Lystad, and Village Attorney Richard Sarafan, as well as documents that I've obtained over the last few years on various issues, I have created this page where I will post all the documents that I collected as a way to provide a source of information available to anyone interested in learning more about these issues.

These documents are divided by either individuals, or issue.

MY INITIAL LETTER TO VILLAGE MANAGER TOM BENTION, WHICH HE HAS FAILED TO ACKNOWLEDGE OR RESPOND TO.

CONTRACT BETWEEN THE VILLAGE AND LYSTAD AFTER HE RETIRED AS THE CHIEF, AND WAS REHIRED AS A CONTRACT EMPLOYEE

THE SITE PAGE ON THE WEBSITE FOR ADVANTAGE CONSULTING, INC. WAS COPYRIGHTED IN 2016: https://www.advantage-networking.com/security/

THE WEBSITE FOR ADVANTAGE LAW ENFORCEMENT COMPLIANCE WAS COPYRIGHTED IN 2021: https://www.myalec.net/

THE BIO PAGE ON THE WEBSITE FOR ADVANTAGE LAW ENFORCEMENT COMPLIANCE WAS COPYRIGHTED IN 2021: https://www.myalec.net/

NOTICE THAT THE LOGO, ADVANTAGE NETWORKING, INC, IS FOR THE PARENT COMPANY, WHICH HAS A CONTRACT WITH THE VILLAGE.

THE CONTRACT BETWEEN ADVANTAGE CONSULTING, INC., AND THE VILLAGE OF MIAMI SHORES FOR INTERNET SECURITY MAINTANCE AND SERVICE.

ANNUAL FINANCIAL REPORTS, KNOWN AS A FORM 1, THAT CHIEF LYSTAD IS REQUIRED TO FILE EVERY YEAR IN BROWARD COUNTY WHERE HE LIVES FOR THE YEARS 2018 AND 2019

ANNUAL OUTSIDE EMPLOYMENT STATEMENT FILED WITH MIAMI-DADE COUNTY BY CHIEF LYSTAD FOR 2018 AND 2019. , 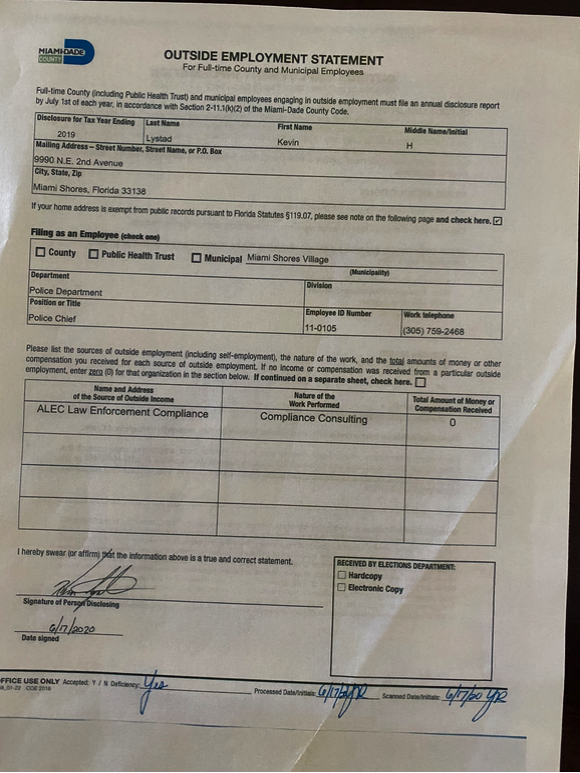 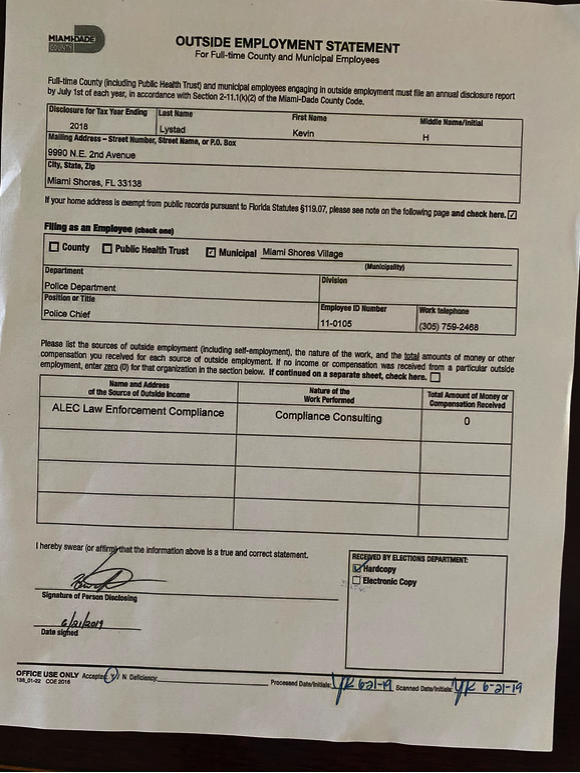 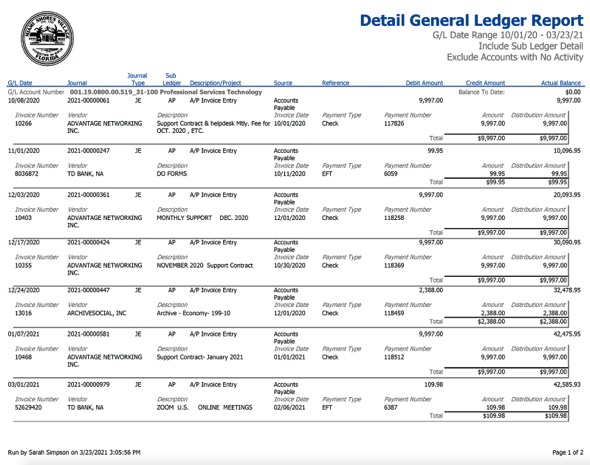 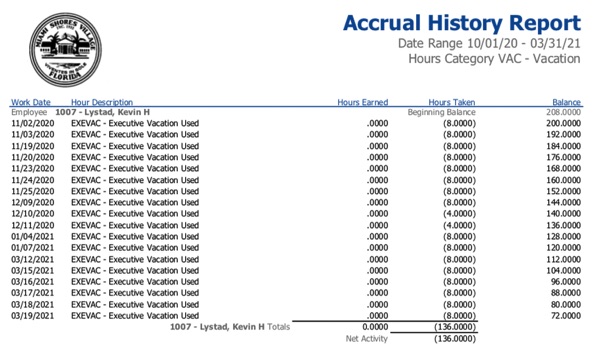 COPY OF CITY OF MIAMI OUTSIDE EMPLOYMENT REQUEST.

Outside Employment Forms by al_crespo on Scribd

PDF COPY OF CITY OF MIAMI AND MIAMI-DADE COUNTY OUTSIDE EMPLOYMENT FORMS, INCLUDING THE EXPLANATION OF WHEN THEY NEED TO BE FILED