YOU CAN'T MAKE THIS SHIT UP

BRUCE BAGLEY, THE FATHER OF ADELE VALENCIA, THE DIRECTOR OF THE CITY OF MIAMI'S CODE COMPLIANCE DEPARTMENT, WHO I ACCUSED TODAY OF PARTICIPATING IN AN ATTEMPTED FRAUD INVOLVING CODE COMPLIANCE EMPLOYEES WAS INDICTED IN THE SOUTHERN DISTRICT OF NEW YORK FOR  LAUNDERING $2.5 MILLION THAT ARE ALLEGED TO BE PART OF THE PROCEEDS OF A VENEZUELAN BRIBERY AND CORRUPTION SCHEME. 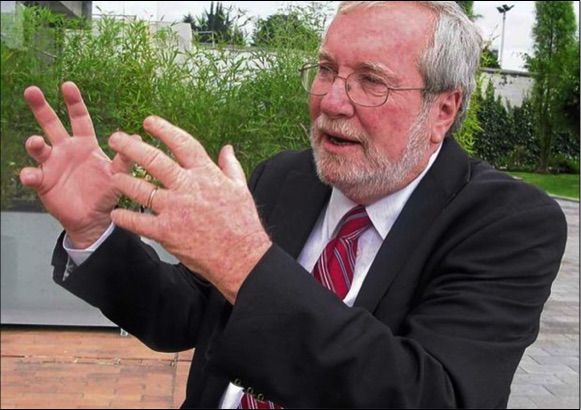 Prof. Bruce Bagley Participated in the International Laundering of over Million Derived from Venezuelan Bribery and Corruption

Geoffrey S. Berman, the United States Attorney for the Southern District of New York and William F. Sweeney Jr., the Assistant Director-in-Charge of the New York Field Office of the Federal Bureau of Investigation (“FBI”) announced the arrest today of BRUCE BAGLEY on charges of conspiracy to commit money laundering and money laundering.  BAGLEY allegedly participated in a conspiracy to launder the proceeds of a Venezuelan bribery and corruption scheme into the United States.  BAGLEY will be presented today in federal court in Miami, Florida.  The case is assigned to U.S. District Judge Jed S. Rakoff in the Southern District of New York.

U.S. Attorney Geoffrey S. Berman said:  “Bruce Bagley, a college professor and author of the book Drug Trafficking, Organized Crime, and Violence in the Americas Today, allegedly opened bank accounts for the express purpose of laundering money for corrupt foreign nationals.  Moreover, the funds Bagley was allegedly laundering were the proceeds of bribery and corruption, stolen from the citizens of Venezuela.  Today’s charges of money laundering and conspiracy should serve as an object lesson for Bruce Bagley, who now faces a potential tenure in federal prison.”

FBI Assistant Director-in-Charge William F. Sweeney Jr. said:  “Criminals employ a host of methods to launder the proceeds of their crimes, but in order to be successful, they need a way to hide and move their money.  As we allege, Bagley, an American professor, contributed to the success of illegal activity overseas, carried out against the Venezuelan people, by facilitating access to illicitly obtained funds, and profiting from his role in the crime.  About the only lesson to be learned from Professor Bagley today is that involving oneself in public corruption, bribery, and embezzlement schemes is going to lead to an indictment.”

According to the allegations in the Indictment unsealed today[1]:

In or about October 2018, Account-1 was shut down for suspicious activity.  Nevertheless, in or about December 2018, BAGLEY provided Individual-1 with information for a new bank account (“Account-2”) in order to transfer additional money belonging to Individual-2.  On two occasions, BAGLEY received funds into Account-2 after Individual-1 had told BAGLEY that the funds represented the proceeds of bribery and public corruption.  BAGLEY transferred the majority of these funds to Individual-1 but retained approximately 10 percent as a commission for his services.

BAGLEY, 73, of Coral Gables, Florida, is charged with one count of conspiracy to commit money laundering, and two counts of money laundering, each of which carries a maximum sentence of 20 years in prison.  The maximum potential sentences in this case are prescribed by Congress and are provided here for informational purposes only, as any sentencing of the defendant will be determined by the judge.

The prosecution of this case is being handled by the Office’s Money Laundering and Transnational Criminal Enterprises Unit.  Assistant United States Attorneys Thane Rehn and Sheb Swett are in charge of the prosecution.

The charges contained in the Indictment are merely accusations, and the defendant is presumed innocent unless and until proven guilty.

Somehow, by hook or by crook there has to be a way for South Florida to be made part of the Southern District of New York.

If we had those prosecutors and FBI agents here, they'd be frog marching politicians out of public building on a weekly basis, and it wouldn't take long for the unindicted politicians to have a Come To Jesus moment, and for me to run out of stories of corruption to write about.

In a story first reported by Jerry Iannelli of New Times, the news that Adele Valencia's father was indicted this afternoon for money laundering was just fucking amazing in light of my story this morning about his daughter's antics in signing an illegal Memorandum Of Understanding, that was then used in an attempt to illegally alter the payroll calculations of some of her employees. (See story below.)

Like they say, the acorn doesn't fall far from the tree.